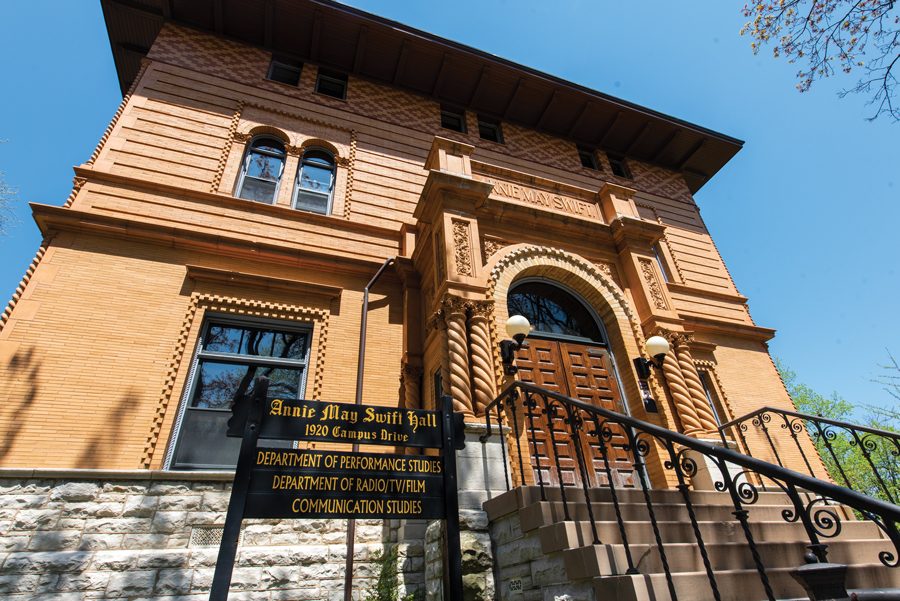 Annie May Swift Hall, home to the Radio, Television and Film department. David Tolchinsky’s term as RTVF department chair will end in September and associate chair Zayd Dohrn will succeed him.

David Tolchinsky’s term as department chair of the Department of Radio, Television and Film will come to an end this September, the School of Communication announced to faculty in a Wednesday email.

According to a news release, faculty members typically serve two 3-year terms as department chair. Tolchinsky, however, served 10 years as chair after he was asked to serve an additional term to “complete his work on the undergraduate and graduate curricula,” the release said.

“Dave stepped up when we most needed new leadership in the RTVF department,” Communication Dean Barbara O’Keefe said in the release. “Twice I had to ask him to extend his service beyond the normal two terms, and the department has benefited tremendously from his willingness to set aside his own agenda and see all the department’s projects to a successful conclusion.”

Tolchinsky will be on research leave during the 2018-19 academic year, but he will continue to serve as co-director of the Master’s of Fine Arts in Writing for Stage and Screen program along with Dohrn. Tolchinsky was not immediately available for comment.

“One of the things that’s been great about Dave is he sets a tone of tremendous collegiality,” Dohrn said. “It’s a true creative community. People work with one another. They collaborate. They teach together. I think those things are really the hallmark of his term.”

Dohrn chaired the planning committee for the department’s program review — which occurs every seven years — and told The Daily that the department received positive feedback and recommendations for change. As department chair, Dohrn plans to take others’ feedback into consideration as the RTVF department continues to expand its programs.

“Partly, I’m going to be listening,” Dohrn said. “I haven’t been chair before. I need to hear from faculty and students about what their priorities are and act accordingly.”

Recently, students have pushed for reform in the RTVF Media Arts Grant funding system in a March proposal. Dohrn said the changes that the proposal’s co-authors discussed with Tolchinsky and Eric Patrick — head of MAG productions — will continue as planned.

“We have always seen the MAG process as something that’s evolving, and I think that’s something that’s getting better,” Dohrn said. “We’ve been taking student suggestions and we will continue to evolve it … over the course of my term.”

In addition to the RTVF administrative changes, the School of Communication announced several other promotions, retirements and changes within the administration.