The Daily Northwestern • May 31, 2018 • https://dailynorthwestern.com/2018/05/31/campus/community-engagement-resolution-presented-at-asg-senate/ 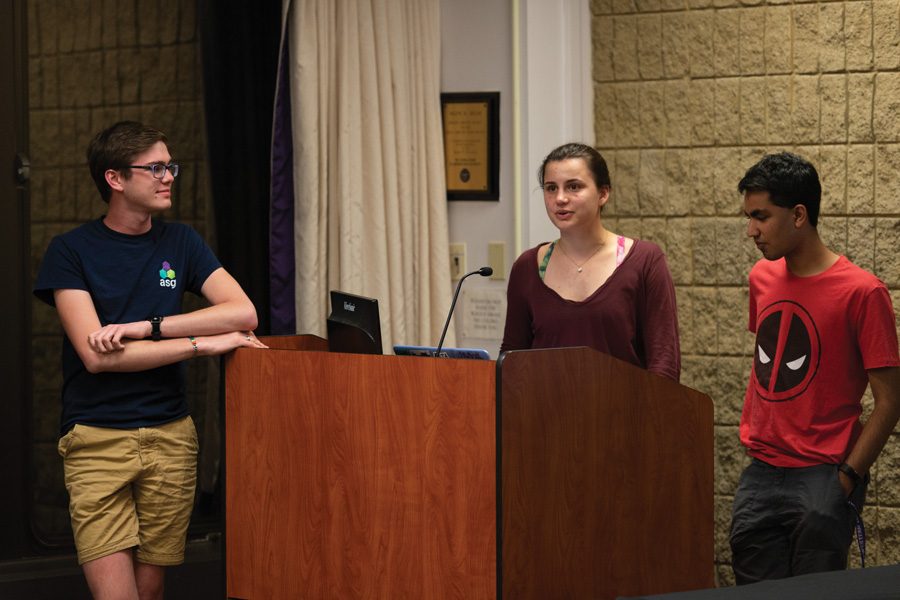 Former vice president for community relations Michael Deneroff and For Members Only senator Emma Evans presented the resolution. Both said though the University has many resources for faculty involvement in Evanston and Chicago, more funding and a larger strategy for student engagement is needed.

“We just want more support for operations and departments on campus such as the Center for Civic Engagement (and) the Office of Leadership Development and Community Engagement,” Deneroff, a SESP junior, said. “We also call for the University to create more of a student-focused strategy when it comes to community engagement.”

Deneroff said the community relations committee has sent many funding requests to the administration to expand existing programs. He said many programs, such as the NU in Chicago program, are at maximum capacity and are unable to offer spots to students. Increased funding would allow them to expand, he said.

Current vice president for community relations Meilynn Shi, a former Daily staffer, said the resolution could help raise local awareness among students. She said many students are often unfamiliar with civic life in Evanston, not knowing what an alderman is or how the city functions.

“Community engagement has been such an important thing for students, especially with elections coming up and all the things we can do as civic actors within our community,” Shi said. “There’s a lot we can always do with community relations. It’s so important.”

Shi said one initiative she is working on is expanding the Center for Civic Engagement’s work-study program to create more opportunities for off-campus work study, which she added can provide opportunities to meaningfully participate in the community.

The resolution can help secure funding and support for that initiative, she said.

“(Creating) infrastructure where we can connect with organizations and build a program where we can have those community-based opportunities requires positions and funds and resources,” Shi said. “This is what that resolution helps do.”

The resolution will be voted on next week at Senate.

She said the new website makes ASG much more accessible to students, as links to the emails of executive board members are easy to find, along with committee descriptions and information on ASG’s student group funding.

Bienasz also said she was happy that all of ASG’s resource guides — which educate students about topics such as activism and sustainable living — can now be found in one place.

Evans and Javier Cuadra were unanimously elected to the Advisory Committee on Investment Responsibility selection committee.