The Daily Northwestern • May 31, 2018 • https://dailynorthwestern.com/2018/05/31/ae/communication-senior-presents-film-work-at-university-in-mexico-talks-influences/ 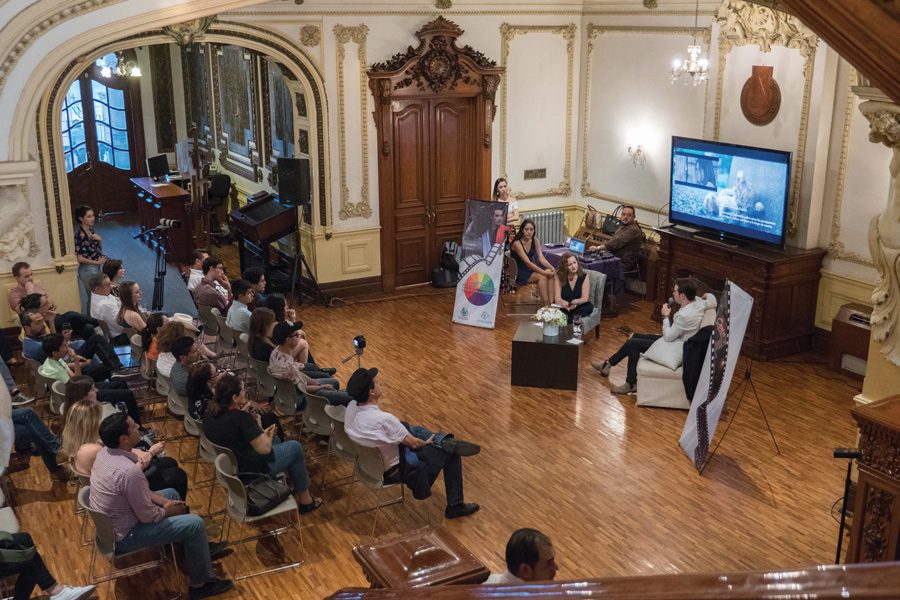 Communication senior Esteban Espino speaks at Universidad Autónoma de Chihuahua on Friday. Espino presented a selection of his works and spoke about his perspective on filmmaking.

While most people grow up observing theater from the audience, Communication senior Esteban Espino watched shows come to life from backstage. Espino said his love for music and movement trace back to his upbringing, as his father was a music composer and theater director.

“It’s like if you have a dad and he’s a chef, you’re going to learn something about cooking,” Espino said.

Although he was raised on live theater, Espino gradually found his love in cinema — a medium, he said, that could bring together not only elements of acting, but also music, movement and powerful imagery.

On Friday, Espino presented a selection of his work to about 100 people at an event put on by Universidad Autónoma de Chihuahua, a public university in Mexico. Espino showed four of his pieces — two short films, a documentary and a commercial — and spoke about his creative influences and his perspective on filmmaking.

Each of the works was personal to Espino in unique ways, he said. For example, he produced the commercial for his elementary school, crafting a story that recreated how he had felt at the school.

In almost all of his work, Espino said he places a strong emphasis on using music to amplify his storytelling. Referencing Italian director Sergio Leone, Japanese director Hayao Miyazaki and Spanish director Pedro Almodóvar as influential filmmakers who rely on music in their storytelling, Espino said music and film “go hand in hand.”

“If you’re going to see my films, for sure you (will say), ‘Oh what song is that?’ or like, ‘Wow, the music is really (apparent) in this movie,’” Espino said. “To me, music plus an image equals emotion.”

Communication senior Dominique Teoh, a friend of Espino’s, said this focus on music is common in most of Espino’s works. Teoh pointed to Espino’s short film “Everness,” which has no dialogue but features a Chopin nocturne.

Teoh said he was excited to hear about Espino’s presentation in Mexico and said Espino’s drive distinguishes him as an filmmaker.

“If he wants to make something, he’ll find a way to make it, but in a realistic way,” Teoh said. “He’ll think about ‘Who do I know, what equipment do I have, what locations do I have access to?’ And … he finds a way to tell really beautiful stories that still have a large degree of imagination in them.”

Espino cited filmmaker Robert Rodriguez’s advice — “Make a film with what you’ve got” — and said he intentionally chose to shoot his two short films “Everness” and “Contigo” in his hometown of Chihuahua, where he would have more resources available.

Communication lecturer Clayton Brown taught Espino in several Radio, Television and Film classes and said he was impressed by Espino’s knowledge of world cinema and his ability to think about his work in a global context.

Brown described Espino as a “very deliberate” and thoughtful filmmaker who cares deeply about his work.

“He’s really interested in the gorgeous kind of cinematography that has a lot of soul and isn’t just about the gimmicks and the high-tech equipment,” Brown said. “For Esteban, it’s always been about the simple shots that are beautiful. … Every shot has to tell a story.”

In the future, Espino said his dream is to direct the kind of full-length feature film that he himself would want to see. For now, he’s just happy being a storyteller.