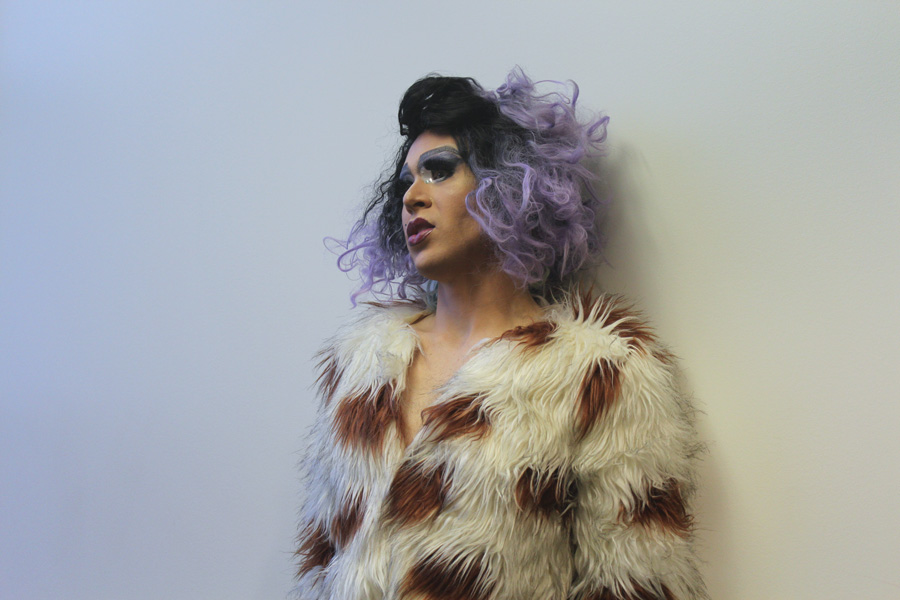 Bienen fourth-year Paul Hunter enters the room wearing black pants and a plain black shirt, looking like any other guy in his early 20s. Well, except for the purple eyebrows. Incongruous with his impeccably groomed stubble and well-shaped buzz cut, these brows clearly belong not to Hunter, but rather to his drag alter ego, Jessica Tour — a play on Juicy Couture.

I assume that the plasticy purple substance is some kind of wax to help build up his brow to the thickness necessary for any drag queen. I couldn’t be more wrong. “It’s Elmer’s glue, actually,” he told me. “My natural brows are too low for me to do any kind of dramatic makeup, so I glue them down and draw on brows higher on my forehead.”

I realize then how little I know about what it takes to be a drag queen. But then again, neither did Hunter just a few years ago. While today he’s enjoying a fast rise in the Chicago amateur drag scene, Hunter had zero drag aspirations growing up, and said he found the whole scene “icky.”

Even the widely beloved “RuPaul’s Drag Race” didn’t evade Hunter’s scorn. “I tried to watch it a few years ago and I was like, ‘What the f— is this nonsense,’” he said. “There were so many inside jokes and so much camp, and I was like, ‘I can’t.’”

But a few years later, when he stumbled upon a group of friends watching the show, his tune changed. “This is the best thing on the earth,” he told himself. He began to follow the show, and put on makeup for fun on that year’s Halloween. At that time he still had no intentions of becoming a drag queen. That all changed at Northwestern.

Hunter heard about Rainbow Alliance’s amateur show and decided to give it a shot. “I went down to T.J. Maxx and I found a pair of stripper heels and I thought, ‘Let’s do this thing,’” he said. Paul thought he did well in the show — well enough that his friends suggested he look into Chicago’s amateur drag scene.

So, in his “Goodwill outfit and dollar store makeup,” Hunter went to go compete at Roscoe’s Tavern — a prominent drag club in Boystown — in what he thought would be a second-rate, easy pickings competition. He was sorely mistaken. Hunter said he now realizes that, when it comes to drag, “amateur” only refers to the fact that the queens are competing for prizes; they are not given a paycheck. The queens themselves, he said, are professionals to the core.

Hunter’s friend Gayla Genda, a fellow drag performer, said she met Hunter at this competition. “I think there’s one night in every drag queen’s life when they look around and think, ‘I have got to step my pussy up; people around me are clearly better than me,’” she said. “That night at Roscoe’s, that was (his) moment of realizing that.”

After that night, Hunter said he began to dedicate more time and effort to his drag, eventually even winning a competition at Roscoe’s. He estimates he’s performed 20 times in the span of 14 weeks, an exhausting schedule when you think about the volatile combination of sky-high stilettos, three-hour makeup routines and full performances of Top 40 songs with intermittent backflips. And, on top of that, Jessica is incredibly giving.

“When I’m dressing up as Jessica Tour, I can unashamedly be that people pleaser that has caused me a lot of issues in the real world,” Hunter said. As a naturally giving person, he said he’s struggled when he doesn’t feel the help he gives is reciprocated. But, he said, “when I’m Jessica, I figure this is 5 percent of my life, I can just bend over backwards for people and tell them that they’re beautiful.”

Even more impressive is that Hunter is keeping up this hectic schedule as a full-time vocal performance student at Northwestern. While Paul loves drag, it’s his work as a choral performer that he said is his true passion. “Choral singing is my absolute joy,” he said. “There are choir works where I feel crappy singing my tenor part, but the work as a whole is amazing. I love that you can cover each other’s backs and highlight each other’s strengths, and the human element of collaboration.”

Hunter’s voice professor, Kurt Hansen, said Hunter’s enthusiasm for choral music is clear to see. “I’ve seen him in choral concerts,” he said. “It’s very obvious when somebody is in their element and loving it, and he does. He’s a really good, solid person, and I know he cares very deeply. That comes across in his music-making.”

While Hunter said he is “flourishing” at Northwestern, the road hasn’t always been easy. He dropped out of Wheaton College after two and a half years due to mental health issues and alcoholism — ironic, he said, given that the main purpose of drag shows is to help bars sell alcohol. While working in cosmetics at Nordstrom, where he picked up a lot of his makeup skills, he auditioned for Northwestern — his dream school — as he thought he had nothing to lose.

Since coming here, Hunter has been sober for nearly a year and a half, and has performed in the school operas and with NU’s top choir. Pursuing classical music at Northwestern seems only natural for Hunter. His mother attended NU to study flute performance and met his father, a clarinetist, when playing with the Civic Orchestra of Chicago.

They started Hunter with the piano when he was three. “I don’t ever remember starting music. It was just always with me, and I hated it,” he said. The piano was a burden until his early teens, when he discovered jazz. He entered Wheaton College as a piano major, but quickly realized that pianists’ required four to five hours of practice a day didn’t mesh well with his sociable personality. Hunter had enjoyed performing with various choirs in high school, so he transferred to the voice studio at Wheaton and hasn’t looked back.

It’s not every day you meet a religious drag queen, but Hunter’s conversations are peppered with “thank you Lord” and references to his strong church community. “Religious is a loaded term, but I’m certainly a Christ-follower and that’s been an integral part of my entire existence,” he said. This part of his identity has led him to an unconventional drag persona. “Drag queens, they drink a lot, and they experiment with drugs, and, you know, the whole sex life is kind of a thing,” he said. “For me, none of those things are really flourishing in my life, intentionally.”

Hunter doesn’t feel his drag and his religious beliefs are mutually exclusive. “It’s the same thing if you’re a popular musician or a classical musician,” he said. “This is something I’m doing, and me doing it doesn’t mean I’m turning my back on everything I believe in. It’s performance art.”