The Daily Northwestern • May 28, 2018 • https://dailynorthwestern.com/2018/05/28/sports/golf/mens-golf-northwestern-narrowly-eliminated-before-final-day-of-team-competition-at-ncaa-championships/ 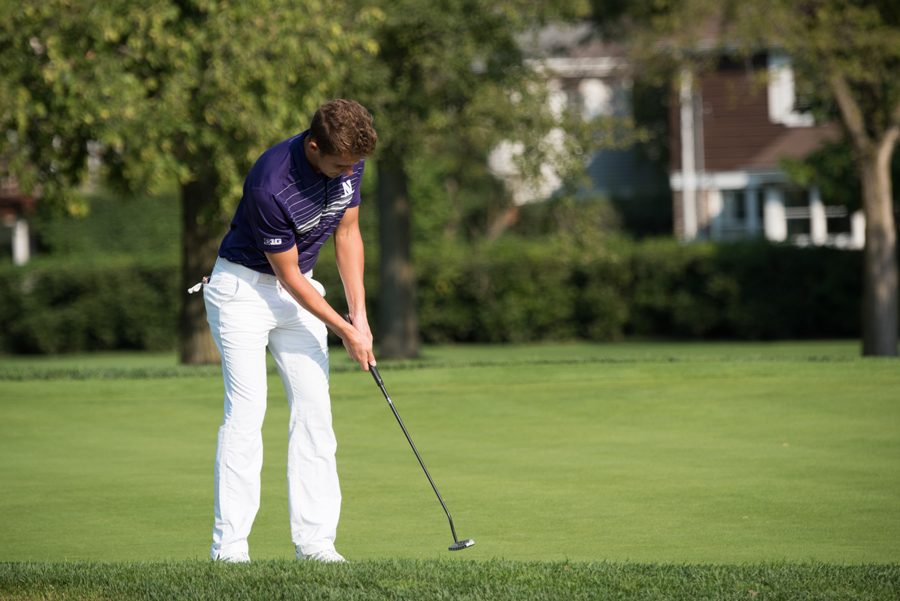 Ryan Lumsden hits a putt. After Friday’s first round, Lumsden individually was tied for first in the tournament.

During its first NCAA Championships appearance since 2011, Northwestern narrowly missed the final day of team competition, while senior Sam Triplett went on to compete with others from non-advancing teams in the final round of stroke play Monday.

The Wildcats started their Stillwater, Oklahoma, excursion Friday even stronger than anticipated. The team finished the first day of competition at Karsten Creek Golf Club in first place, with junior Ryan Lumsden tied for first overall. Triplett and sophomore Everton Hawkins finished in the top 25 after the first day as well.

Coach David Inglis said the Cats to have the lead early on demonstrated their improvement as a team.

“That was just an indication of how far our games have come,” Inglis said. “This wasn’t a miracle round; this was us taking care of business and playing how we know how to play.”

Inglis also said the team knew going into the second day that the competition would get even stiffer. NU could not keep their footing on Saturday, however, finishing the day in 19th. The team finished 20-over par on the day and only Lumsden remained in the top 25.

The Cats managed to eke their way into 16th by the end of Sunday’s outing, but fell two strokes shy of North Carolina for the 15th and final spot in Monday’s round. Rougher course conditions caused issues for the team, Inglis said, and the team gave away too many “cheap shots.”

As one of the top players from the non-advancing teams, Triplett got the opportunity to play Monday as an individual. Triplett said going on to compete without the team was “strange,” and he turned in a 7-over round after standing at just 3-over after Sunday.

“I knew coming into the day I wasn’t competing with my teammates,” Triplett said. “In addition, I wasn’t anywhere near to competing for the individual title. I was just trying to enjoy it as much as I can.”

Triplett said even though it was disappointing not to accomplish all they set out to do at Karsten Creek, the entire experience was something to be proud of.

Freshman Eric McIntosh said he gained much from the pre-competition prep, as well as the weekend itself. Playing alongside the country’s best players created an important learning experience, he said.

“You subconsciously learn from what they do through every round,” McIntosh said. “You’re always learning when you’re playing with guys at that level.”

Triplett said starting off so strong and almost making it to Monday’s round left him with a lot of emotions to process, especially with his career coming to a close.

He said it may take him a few weeks to fully parse through all of the feelings and highs and lows of the week, but he’s leaving the program with a finish he says they should be proud of.

“We were on such a high after the first day,” Triplett said. “Looking back on that, it’s really cool (that) our team can compete with the best teams in the country, (and that) is a source of validation. We’re doing the right stuff, and if the program can keep doing that the next few years, there’s no reason they can’t be a top 10 team.”