The Daily Northwestern • May 28, 2018 • https://dailynorthwestern.com/2018/05/28/city/aldermen-to-consider-oak-avenue-chicago-avenue-developments/ 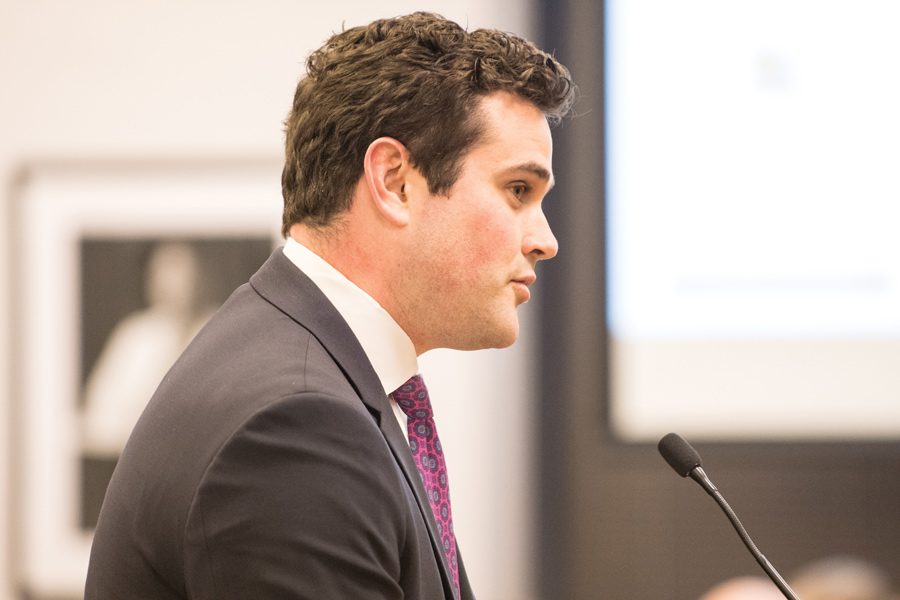 Johnny Carlson presents his firm’s plan for a development at 1727 Oak Ave. to the Plan Commission on April 11. After passing the Plan Commission, City Council voted 7-1 to advance the special permit for introduction at Tuesday’s council meeting.

Aldermen are set to vote on a special use permit for a 17-story, age-restricted rental development at 1727 Oak Ave. during Tuesday’s City Council meeting.

At a council meeting on May 14, aldermen voted 7-1 to advance the special permit for introduction. However, multiple council members voiced concerns about the development leading to increased traffic on Ridge Avenue.

The proposed building would include 169 units, a dog park, a pool and 139 parking spots. Johnny Carlson, principal of the midwest business unit for the developer Trammell Crow Company, said at an April 11 meeting that all apartments would have at least one tenant age 55 or older.

Aldermen will also vote on another proposed development — a five-story, mixed-use building at 128-132 Chicago Ave.

The building will include 26 residential units, along with a teaching garden, an organic plant yard and a cafe serving organic, locally sourced food. David Brown, president of Harrington Brown LLC, said at a meeting on April 18 that the building would be the first garden-based lifestyle center in the country.

“(The location is) screaming out for something special to be done here,” Brown said, “and we are thrilled to be at this point in the process where I think we have pulled together something that is quite special and will be a great benefit to the City of Evanston going forward.”