The Daily Northwestern • May 25, 2018 • https://dailynorthwestern.com/2018/05/25/lateststories/mfa-student-adapts-german-play-about-adolescence-generational-conflict/ 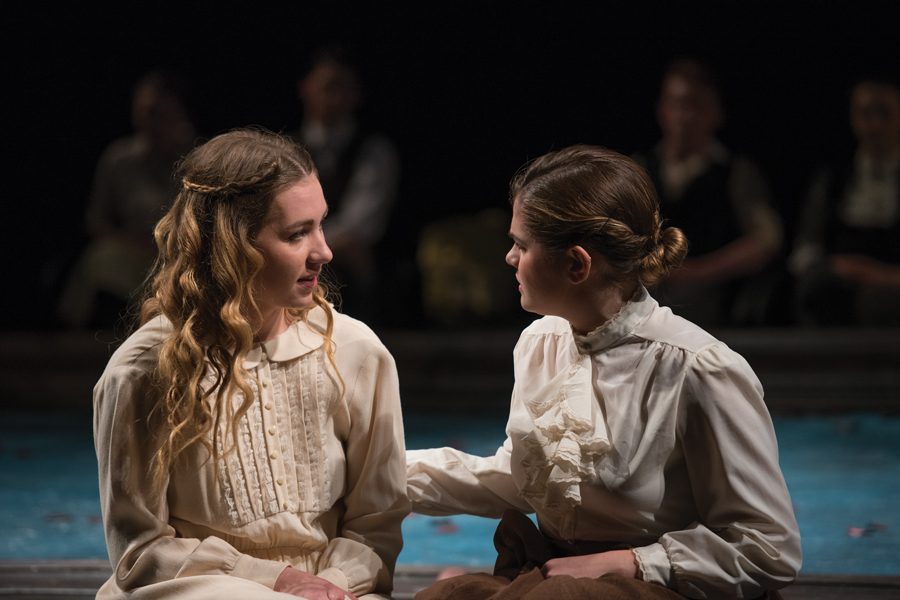 Two actors perform in a rehearsal for an adaptation of “Spring Awakening.” The show will open at the Hal and Martha Hyer Wallis Theater on Friday.

When MFA student Alex Mallory decided she wanted to bring German play “Spring Awakening” to Northwestern, she read through several English translations before deciding none of them were quite right.

So, she took it upon herself to produce her own translation of the three acts.

Her adaptation of “Spring Awakening” will open at the Hal and Martha Hyer Wallis Theater Friday as part of the MFA Lab Series. The show follows six teenagers in 1890s Germany whose lack of sex education in a society of repression ultimately leads to severe consequences.

Mallory, the show’s director, said these teenagers struggle to understand their physical impulses while navigating the intense success-based society they live in. In addition to exploring the adolescents’ challenges, the play also highlights the “humor and absurdity of growing up,” she said.

Though the original work was written in 1891, Mallory said many of its themes still resonate today. She described the play as a coming-of-age story that explores the generational conflict between parents and their children.

“Everyone has a relationship with a parent and that is a lot about what this play is about … the upbringing and education and what our parents give up,” she said.

Communication junior Juliet Wolfe plays Wendla, a girl who is turning 14. Wolfe said her character grapples with becoming a mature adult while receiving little guidance from her mother, who tries to preserve Wendla’s innocence.

Wolfe said “Spring Awakening” asks many questions without giving “a prescriptive answer.” The play shows what can happen when there is no open communication or sex education in a society, she said.

Communication freshman Lindsey Cooke, the play’s stage manager, said the show delves deeply into “heavy” issues like mental health, abortion and rape. Because of this, Cooke said the team has been conscious about creating an environment in which cast members feel comfortable discussing the show’s themes.

“(It has been) a process figuring out how best to tackle this material and keep everyone in a space where it is emotionally safe for us to discuss this, and where everyone feels like they can talk openly and honestly about all the things that are included,” she said.

Mallory said the biggest challenge of the show has been negotiating these acts of violence that are central to the play’s story. She said she hopes audiences feel challenged by the play and think about the importance of “a ceaseless pursuit of knowledge.”

Wolfe echoed this and said she hopes the audience members leave the show thinking about the society depicted in the play, societal issues and what they would change.

“An interesting thing whenever you restage an old play is to think about what’s changed and what’s still the same,” Wolfe said. “A lot of conversations have evolved since ‘Spring Awakening’ was written — conversations about education, about sexual assault, about misogyny — but so many of these things that were issues … are still things we haven’t been able to stop happening.”