The Daily Northwestern • May 24, 2018 • https://dailynorthwestern.com/2018/05/24/lateststories/on-day-of-northwestern-swatting-hoax-calls-to-evanston-chicago-police-targeted-same-couple/ 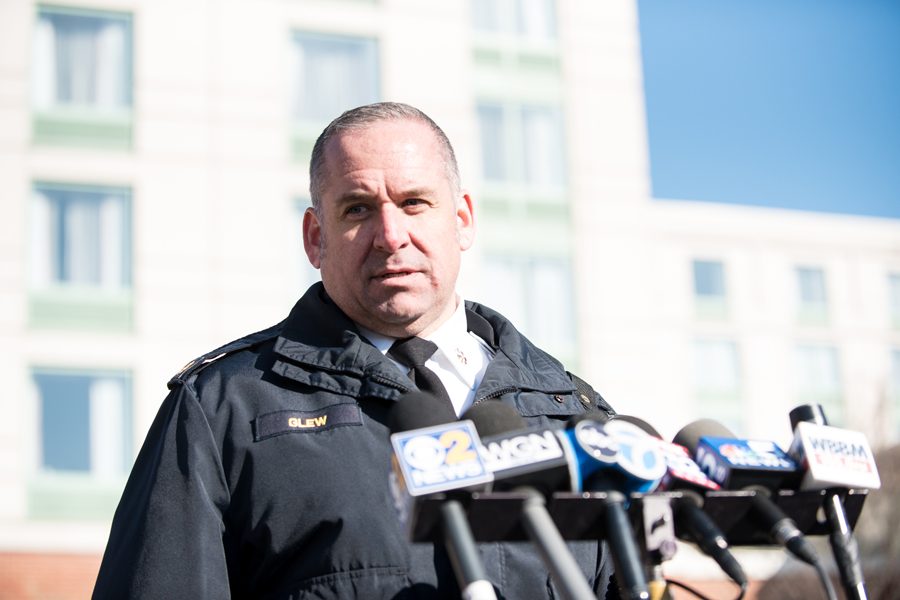 Evanston police Cmdr. Ryan Glew speaks at the media station at the Hilton Garden Inn Chicago North Shore/Evanston parking lot on March 14. The couple that was targeted in the Evanston swatting incident was also linked to a call regarding a fake incident in Chicago the same day.

The couple that was targeted in a March swatting incident on Northwestern’s campus was also targeted by a similar hoax call to the Chicago Police Department, the Chicago Tribune reported.

The Evanston Police Department has not yet identified the person who called and claimed to have shot his girlfriend in graduate residence Engelhart Hall on March 14, sending the Northwestern campus and Evanston community into panic. When the unidentified man called EPD, he claimed to be the boyfriend of a Pritzker School of Law student, using both people’s real names, Evanston police Cmdr. Ryan Glew told The Daily in March. Both the man and woman were later determined to be safe and are not thought to have been involved in the incident, police said.

The March 14 event that was determined to be a swatting incident began at about 2:15 p.m. after EPD received two calls on the non-emergency line. Both calls came from the man who claimed to be the law student’s boyfriend.

Meanwhile, at about 3:05 p.m. the same day, a woman called the non-emergency line at the Skokie/Lincolnwood 911 dispatch center saying that a man had shot a different woman in an apartment in the 4800 block of North St. Louis Avenue in Chicago, according to the Tribune. When CPD officers arrived at the address, nothing was found.

Glew told the Tribune this week that the Evanston and Chicago calls are related to one another, and both addresses — Engelhart Hall and the apartment in Chicago — are tied to the targeted couple. Glew confirmed that the boyfriend now lives in the apartment on St. Louis Avenue and had lived in Engelhart Hall in recent years.

In March, Glew told The Daily the call to EPD appeared to have come from near Rockford, Illinois, which is more than a 90-minute drive from Evanston. He added that swatting incidents can become dangerous.

“It’s very dangerous, anytime that you have a response, that people, officers that are armed, coming with a SWAT response to what they believe is an active shooter, or somebody who has been shot,” he said.

If caught, Glew told The Daily in March, the callers could face felony charges. He told the Tribune this week that the swatting response cost Evanston “too much.”

“Nobody’s sat down and figured (the cost) out,” Glew told the Tribune, adding that “it’s in the tens of thousands” of dollars.

Chris Carver, operations director for the National Emergency Number Association, told The Daily in March that callers sometimes use technology to make the call appear from either the location of the incident or nearby. He said the person making the call is often far away and targeting a specific person but in some cases means to disrupt larger communities.