The Daily Northwestern • May 24, 2018 • https://dailynorthwestern.com/2018/05/24/lateststories/friends-professors-remember-dominic-davis-for-perseverance-kindness/ 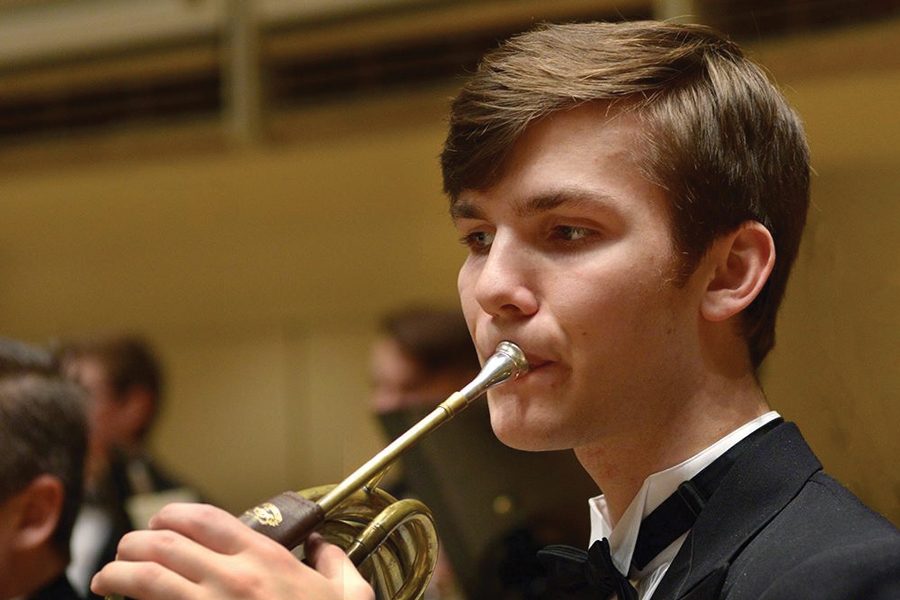 In February, Dominic Davis performed for the horn studio program at the Bienen School of Music. Less than a year earlier, he had been diagnosed with cancer for the second time and, despite a surgery that replaced half of his jaw, he continued to play.

“Everyone was really touched by that performance,” Bienen freshman Michael Stevens said. “It pretty much established that there are no excuses, if he can play. It was probably one of the most inspirational moments of my time here at Northwestern, maybe even my life.”

Davis died last week, soon after the Bienen sophomore stopped attending classes at Northwestern. Bienen sophomore Sophie Steger, who met Davis in high school when they played together in the Chicago Youth Symphony Orchestra, said Davis was first diagnosed with cancer during elementary school. Because of a genetic disease, he was diagnosed again during the spring of his freshman year in college.

He continued to attend classes at NU, and students and professors who spent time with him were struck by his perseverance. Stevens, who is in the horn program, said it’s nearly impossible to play the instrument with half a jaw and missing teeth, but Davis found a way. He said watching Davis perform helped motivate him in his own performances.

Bienen Prof. Gail Williams, who has taught horn during Davis’ time in Bienen, said she was struck by his consistently positive attitude.

Williams also remembered Davis for his musical talent. She said when he was a freshman, she gave him pieces to play that she’d usually only assign to juniors or seniors — and he executed them flawlessly.

Shawn Vondran, Bienen lecturer and conductor of the Northwestern University Symphonic Band, said he too was “astonished” by Davis.

“His sound on the horn was, as an entering freshman, as mature a sound as I’ve ever heard someone his age make,” he said. “And not only beautiful sound, but beautiful sense of phrasing, very expressive, had mature musical thoughts. So I just felt like he was well beyond his years in terms of his talent.”

Steger said she’d remember Davis’ optimism and impressive work ethic. Steger, along with almost all the other members of the horn program, performed at Davis’ funeral Saturday.

She said Davis would often say that his original cancer diagnosis led him to treat every day like it could be his last. Steger said he maintained this attitude even while undergoing radiation treatment in Chicago.

“He was still playing until the very end,” she said. “I remember, I think it was not even three weeks ago he was in rehearsal here, and he looked at me and was like, ‘Oh does my sound kind of sound off today?’ And I was like no, I think you sound fine. And then he looked at me like 20 minutes later, and he’s like ‘I did have radiation today, so maybe that’s why I sound a little off.’”

Stevens said that in the fall, he and Davis had decided to start practicing random tasks — so the pair decided to begin with ping pong before moving on to ice skating.

He said he had no idea how Davis was able to ice skate, given that he had a bone from his leg taken out to replace his jaw. Still, Stevens found that Davis was better than him at both ice skating and ping pong.

“He was just probably everyone’s dream best friend,” Stevens said. “You couldn’t ask for anyone better to support you, and I think that’s why he was one of the most well-liked people out of everyone at this school. Everyone just loved him because he just had such a big heart for everyone, regardless of who you were.”

Robert Hasty, Bienen lecturer and conductor of the chamber orchestra, said he’d often run into Davis around campus. One of the last times Hasty said he saw Davis was at Norris University Center, when he joked with the sophomore about his attempt to grow a beard.

Hasty said he didn’t know the extent of Davis’ condition.

“I thought he was gonna be one of those victory stories,” he said. “I did not see or know that there was a downturn in his health. When I got the email from Gail Williams, my wife was in the other room but she could hear me sobbing, because I was absolutely shocked.”

The symphonic band has kept Davis’ name in concert programs as a member of the ensemble. At their last performance of the year, members they will play with an empty seat meant to honor Davis.

Vondran said the band will keep the open seat for two reasons: to acknowledge Davis’ passing, but also to show that he’s still with them.

Overall, Vondran said, Davis will be remembered for his kindness.

“You know sometimes when you meet somebody and they just seem too nice to believe?” Vondran said. “I never got a sense from Dominic that his kindness, his generosity, his humor was any kind of affectation. It just came from the heart. And I think that was clear to anybody that knew him.”