The Daily Northwestern • May 24, 2018 • https://dailynorthwestern.com/2018/05/24/campus/compass-presents-food-service-plan-dining-hall-renovations-at-asg-senate/ 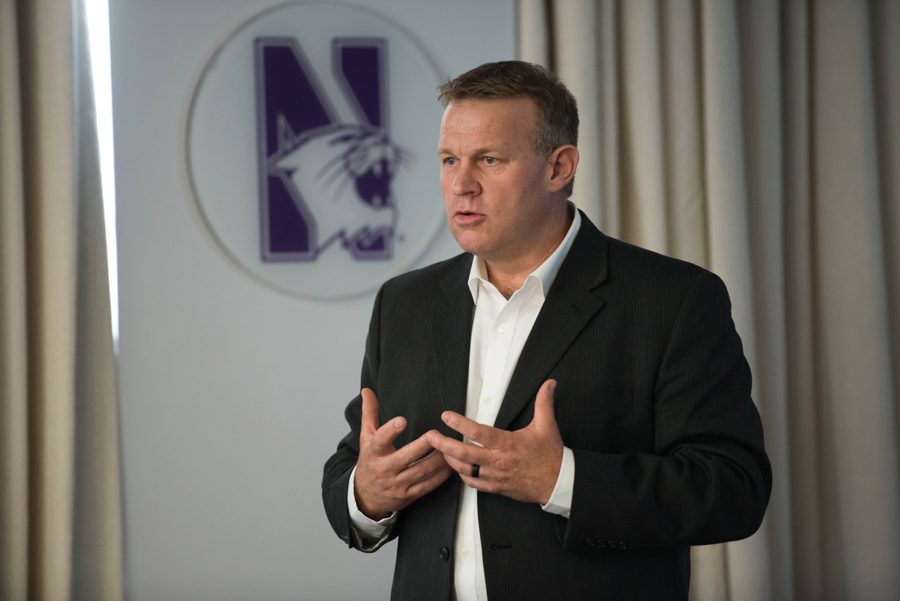 Karl Behrens, chief operations officer of the Compass Group project division, said his team plans to renovate the dining halls in Elder Hall, Sargent Hall, Foster-Walker Complex and Allison Hall. Each will be renovated in consecutive 90-day periods during the 2018-19 academic year in the order listed, and each has a specific theme and design.

Behrens said Plex will undergo the largest renovation: The interior walls will be removed to connect Plex West and Plex East, and the space will have a “light, airy, transparent” feel. The space will have 12 to 14 “micro-restaurants” each serving its own rotating menu, Behrens said.

“Foster-Walker, for us, is most probably a destination where you feel like bringing in some of that new dining experience that you see in High Street in downtown Chicago,” Behrens said.

Allison’s theme is “Food e-Lab,” he said. Its interior walls will also be removed to create an open area, with a “teaching kitchen” for students to learn about their meals.

Behrens said Elder will be marketed as a “fun food factory,” which will be expanded by adding seating in the courtyard. He said the goal is to have Elder serve some street food and handheld meals. Compass will also add a skylight to improve the lighting, he said.

Sargent, which was recently re-done, will undergo the smallest renovation. Behrens said the changes will be more related to the programming than the interior — the company hopes to serve all-day breakfast in an area called “My Pantry” and create a farm-to-table feel.

District 5 senator Alex Moore told The Daily he is looking forward to the renovations.

“There’s going to be a lot of change, but it’s good change,” the Medill freshman said. “It’s really modern, and I feel like there’s going to be many new experiences that students can collaborate in the dining halls and still enjoy their meals and eat quality food.”

Some ASG senators raised concerns about North Campus residents having to travel during the winter for meals, as Sargent is scheduled to close from Dec. 1 to Feb. 1.

Behrens said his team will take steps to make the transition periods as painless as possible and that he anticipates Sargent’s renovation will not take the full 90-day period. He added that Elder will have been renovated by December and — with its more accessible hours — take on the displaced students. In addition, Compass will add a mobile fleet of food trucks and renovating Lisa’s Cafe.

“There will be that inconvenience, but this is just part of the cost of this renovation,” said Jeremy Schenk, executive director of Norris University Center.

Behrens also said Compass aims to be as communicative as possible, collecting student feedback, keeping students informed on the progress of the renovation and installing webcams to film behind-the-scenes videos during construction.

Compass also has major plans for Norris, he said. An outdoor dining area will be created on the South Lawn, and new dining options will be embedded on the ground level, replacing most of the current vendors: Asian-inspired restaurant Asiana, The Budlong Hot Chicken, healthy burger restaurant Juicy Lucy, Wildcat Deli, made-to-order salad bar Market, MOD Pizza and Dunkin’ Donuts.

All of the ground floor furniture will be redone, and on the first floor, Starbucks will offer mobile ordering, Behrens said.

Behrens added that with all the changes, Compass’ objective is to ensure that NU provides its students with a “lifestyle degree” in addition to an academic degree.

Ultimately, he said in addition to diversifying the dining options, he wants students to go to the same dining hall multiple times a week and feel that each visit is a different experience.

“At the end of the day, we just want to have a vibrant space where students can come to this location for more than a meal,” Behrens said.