The Daily Northwestern • May 23, 2018 • https://dailynorthwestern.com/2018/05/23/sports/mens-golf-northwestern-prepares-for-first-ncaa-championships-in-7-years/ 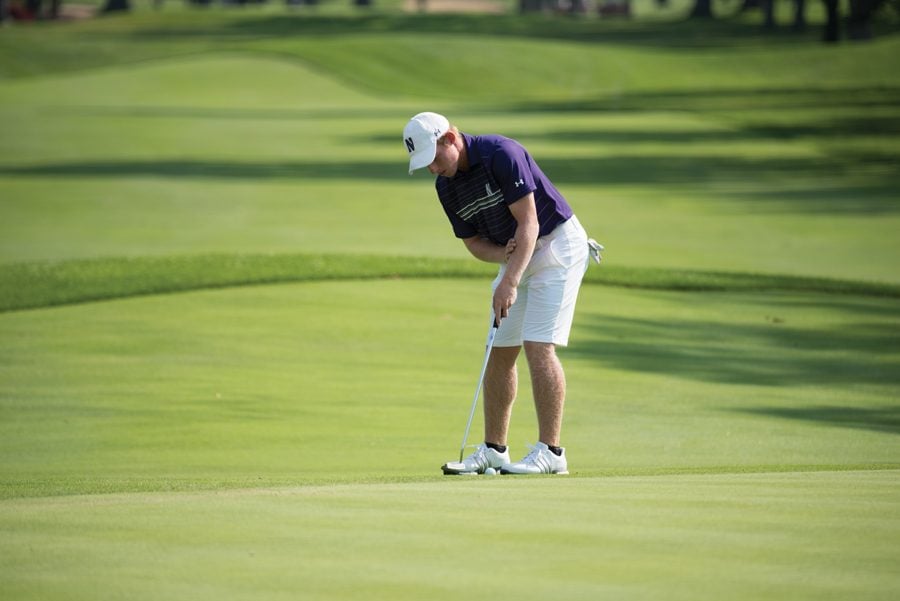 Sam Triplett hits a put. The senior will compete in his first NCAA Championships this weekend.

For the first time since 2011, Northwestern is headed to the NCAA Championships this weekend at Karsten Creek Golf Club in Stillwater, Oklahoma.

The Wildcats finished fourth in the NCAA Regionals last week in Columbus, Ohio, securing their spot in the finals. Senior Dylan Wu said missing the finals during his first three years at NU made making it this year “a relief.”

Wu, senior Sam Triplett and junior Ryan Lumsden were part of the squad that played at the course in 2016.

Triplett described the course as “unique” because of its wide fairways. But when tee shots miss the fairways, he said, the course is not forgiving at all, making it more intimidating than average. Wu attested to Triplett’s statement, calling it the toughest course he’s played in college.

In his last official event on the Cats’ squad, Triplett said the team is focusing on demonstrating their abilities on a national stage. During his freshman year, he said, NU didn’t even make it to regionals, so to come this far is exciting.

“Our main goal is to get out there and play more free than we did at regionals and be less worried about making mistakes,” Triplett said. “We know we have the talent and skill level to compete with the best teams in the country.”

That goal will nonetheless be an uphill battle, as the Cats enter the weekend seeded 26th in a field of 30 teams. The team starts its practice round Thursday but the event, hosted by No. 1 Oklahoma State, tees off on Friday.

“We know it’s going to be hard … but we’re set up already with a lot of experience playing courses like that where you just have to grind,” Inglis said. “There are going to be some players who are not equipped for it and it’s going to show in their scores.”

While this week may be Wu’s last hurrah with NU, it’s not the end of his golf career. After graduation, Wu will go on to play professionally. He earned his PGA Tour Canada card after coming in 10th at the Mackenzie Tour at the beginning of the month.

Wu said although his last collegiate tournament is a little bittersweet, having helped his team get to a final means his four years’ impact will last longer than this weekend.

“I can give it my all and know that, one of the years I was here, we made a national championship,” Wu said. “From the transition from my freshman year of not making it to regionals, (to) now having a chance to win a national championship and compete against the best teams, is a great way to leave my legacy.”