The Daily Northwestern • May 23, 2018 • https://dailynorthwestern.com/2018/05/23/lateststories/communities-in-schools-of-chicago-named-2019-dance-marathon-primary-beneficiary/ 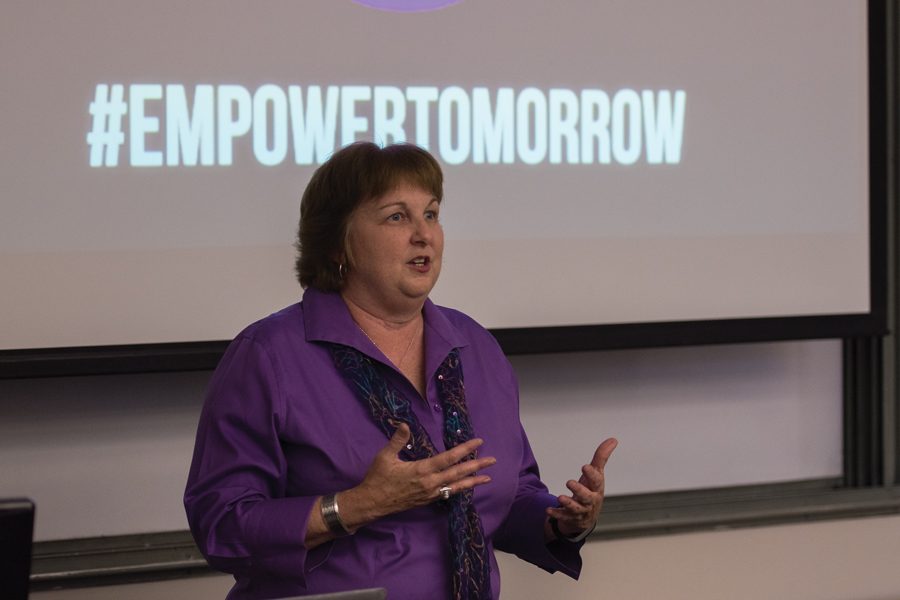 Jane Mentzinger, executive director of Communities In Schools of Chicago, speaks at a presentation. NUDM announced Wednesday that CIS will be the primary beneficiary for the 2019 Dance Marathon.

Communities In Schools of Chicago will be the primary beneficiary for Northwestern’s 2019 Dance Marathon, NUDM announced Wednesday.

The announcement was made by Weinberg juniors CJ Patel and Justin Savin, the 2019 NUDM co-chairs, at an event in University Hall. Savin and Patel were both committee members during their first two years of DM, and had served on the executive board for NUDM 2018 as special events and analytics co-chairs, respectively.

CIS provides students in Chicago Public Schools with support and aims to prevent dropouts. The organization began working in Chicago in 1988 and partners with 147 schools in the area.

In a news release, Savin called the group’s relationship with CISC a “true partnership.”

“The distribution of opportunity in the United States is inequitable,” Patel said in the release. “CIS of Chicago attempts to diminish the opportunity gap by thinking critically about the systemic and institutional issues perpetuating the drop-out crisis. This degree of intentionality is unique, and makes CIS of Chicago a particularly important organization.”

At Wednesday’s event, CISC board chair Greg Stoklosa spoke to NUDM members and thanked them for making the organization the primary beneficiary.

“I’d just like to say too, through this entire process, how impressed we’ve been with the professionalism, the dedication and the energy of everybody associated with this effort,” Stoklosa said.

Jane Mentzinger, executive director of CISC, said the organization works to break down the barriers that prevent students in Chicago from graduating — such as economic difficulties or lack of school funding — by placing staff members in schools who act as support mentors.

CISC plans to bring students in the program to campus over the course of the next year, Mentzinger said, to show them the University as a way of exposing them to new possibilities for the future.

Savin said NUDM will continue its partnership with Evanston Community Foundation as its secondary beneficiary in 2019; the foundation has been in that role since 1997.

Later, one of CISC’s student support managers, Brianne Daubenspeck, and four of her students from Foreman College and Career Academy — a Chicago school that has suffered recent budget cuts — addressed NUDM members. The students, who had received a tour of Northwestern earlier in the day, shared stories of how CIS has impacted them.

Psychology Prof. Greg Miller said CIS is a special organization because it confronts the “depressing challenge of our times” — inequality — and seeks to change it. He commended NUDM for supporting it.

“Inequality doesn’t begin when people get their first jobs,” Miller said. “Inequality begins in the very earliest years of life. And that there is a lot we can do, as individuals, as a society, as institutions, to pose that opportunity, and give kids the chances they need to be equal in all these different spheres of life.”

This story was updated at 12:30 a.m. with comments from Greg Stoklosa, Jane Mentzinger and Greg Miller.