The Daily Northwestern • May 22, 2018 • https://dailynorthwestern.com/2018/05/22/sports/womens-golf-northwestern-eliminated-in-quarterfinals-of-national-championships/ 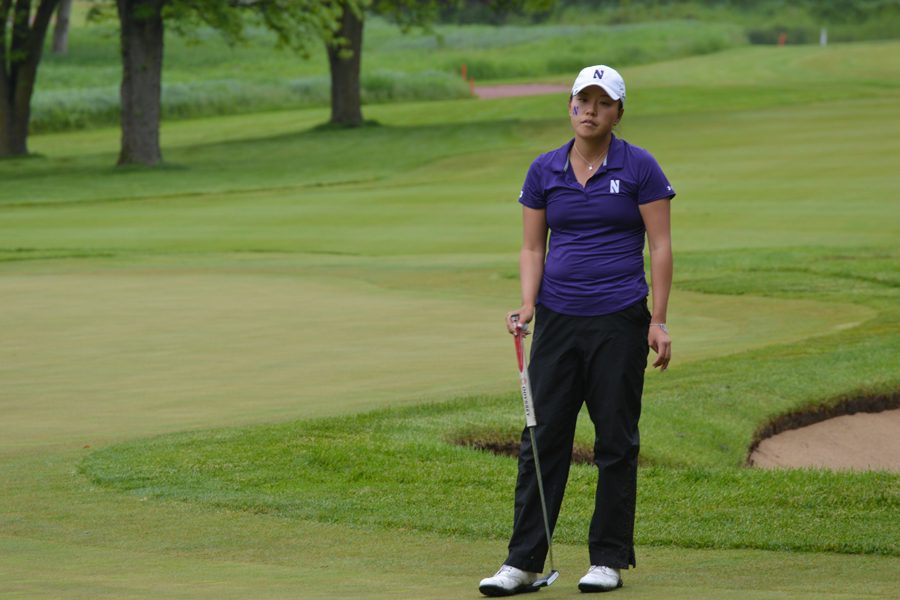 With Northwestern’s season on the line, Janet Mao stepped up to a birdie putt on her 17th hole of the day. And she drilled it.

But her work wasn’t done. After an up-and-down match play showdown against Stanford star Andrea Lee, Mao still sat one shot back heading to the final hole. The teams were tied at 2-2 in the five-person match play quarterfinal.

And on that final hole, Mao once again stood on the green with a must-make birdie putt to keep the Wildcats’ season alive.

This one came up short. Lee won the match, Stanford moved to the semifinal and NU headed home.

“Looking at it, it looked like it was going to go right at first,” Mao said. “And then I was looking in my book, and it said kind of by the hole it was going to trickle back left. But at the end of the day, the putt was a little slower than I thought it was, so I ended up leaving it a little short.”

The upperclassmen-laden squad entered the week hoping to repeat last year’s run to the championship final. With seniors Hannah Kim and Sarah Cho returning alongside juniors Mao and Stephanie Lau, the team relied on its talent and experience to snag the No. 4 seed in the match play bracket.

Kim and Cho both thrived in the match play competition, as Cho took the opening match 3-and-1 while Kim dominated to win her match 5-and-3.

“I honestly felt like I wasn’t really playing against my opponent, it’s just me against the golf course,” Kim said. “That’s one of my biggest secrets to match play. I think that’s why I’ve been so successful. I just keep doing my own thing regardless of what the score is.”

While Kim and Cho controlled their matches, Lau, Mau and sophomore Brooke Riley all struggled. Lau has yet to pick up a win on the biggest stages, falling to 0-4 in National Championship match play rounds after losing 5-and-4 to Stanford’s Albane Valenzuela.

In Tuesday’s high-pressure showdown, Riley made seven straight 5s across three par-4s, three par-5s and one par-3, failing to take advantage of her opponent’s similar struggles.

“All of us fought as hard as we could out there,” Cho said. “It was exciting to be able to watch some of the holes for Janet’s match, and it reminded me of the camaraderie we have and how supportive we are of each other.”

Mao was tasked with the hardest challenge.

Lee, her opponent, had tied for the second-best round among all competitors over four days of stroke play and was named First-Team All-Pac 12 after a spectacular individual season.

“It definitely wasn’t going to be easy, especially against Andrea,” Mao said. “We’ve been friends for a long time, she’s great, and I have a lot of respect for her game. After seeing that match, I knew I wouldn’t have room to make any mistakes.”

With the quarterfinal loss, the Cats completed their second-best tournament in program history, trailing only last year’s runner-up finish.

Cho and Kim conclude their careers having played in all four of the school’s best national championship performances, starting with a 10th-place finish their freshman year.

“I haven’t really had much time by myself to really process everything,” Kim said. “Once I get back home, unpack and get settled down, I think that’s when it’s going to hit me. … I’m going to break down in tears and really recollect all the memories I made at Northwestern.”