The Daily Northwestern • May 22, 2018 • https://dailynorthwestern.com/2018/05/22/lateststories/student-activists-unite-during-community-teach-in-stress-importance-of-coalitions/ 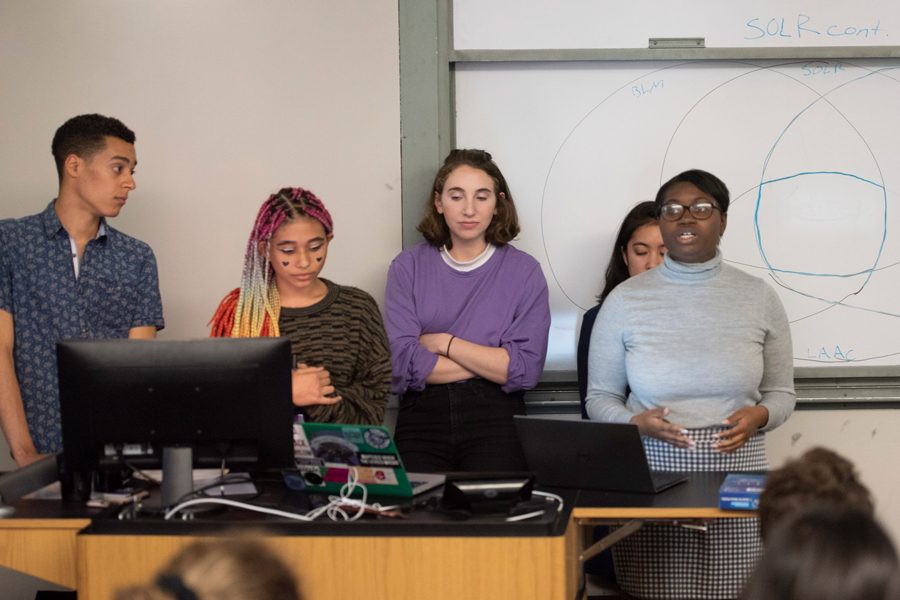 Student activists discuss strategies and progress at a Monday event in University Hall. The activists stressed the importance of forming supportive relationships between activist groups.

Student activist groups came together Monday at University Hall for a teach-in to inform the community of their progress and future plans to accomplish their goals.

Members of Black Lives Matter NU, the Latinx Asian American Collective, Students for Justice in Palestine and Students Organizing for Labor Rights discussed strategies to overcome barriers facing student activists at Northwestern. The groups stressed their interconnections and the importance of coalition building to reach their goals.

Weinberg sophomore Sharmain Siddiqui of SJP stressed the importance of “Black-Latinx-Palestinian” solidarity, referencing a 2015 demonstration organized with MEChA de NU. Activists also referenced the May 2017 protest against the visit of an Immigration and Customs Enforcement public relations officer, organized in part by MEChA and BLM NU.

More recently, some activists — many of whom are in several of the groups — walked in on a May 3 panel discussion of the 50th anniversary of the Bursar’s Office Takeover, holding a banner that read “You Never Completed Our Demands.”

Members of the groups released a list of demands on the same day that outlined broad concerns regarding the black student experience, departmentalization and the dining service transition on campus. The collective action and support is representative of the shared struggles nonwhite students face at a predominately white institution.

“We’re all oppressed under similar, if not the same, forces,” said Weinberg freshman Eliza Gonring, a member of BLM NU.

Members of each group said they plan to support each other’s efforts, as many of them face the same difficulties when trying to get administrators to act.

Siddiqui said she plans to double down on efforts to urge the University to divest from companies that supply Israeli forces with weapons and machinery. SJP plans to urge transparency from the Advisory Committee on Investment Responsibility, which is a product of the 2015 and 2016 divestment campaigns and has since been used to simply “placate” students, Siddiqui said.

Communication junior Danielle Dougé of LAAC and BLM NU said the Latina/Latino and Asian American Studies Programs have won concessions in their fight for departmental status, such as an increased LLSP budget and the possibility of tenure-track professors. But deliberations with Weinberg administrators are slow and frustrating, she said.

“Really it’s been kind of just a battle and a back and forth. Having the support of faculty and faculty in the room to affirm us is really important,” she said before praising the directors of the two ethnic studies programs.

Weinberg sophomore Isabella Ko of Students Organizing for Labor Rights said after winning assurances of job security from Compass Group, the newly-formed group plans to work toward an elimination in the University’s use of E-Verify, a federal employee verification program, for jobs that don’t require it.

The celebration of black student protest was also problematic, Gardner said, because the University did not acknowledge at any point its “positionality as the oppressor” in 1968.

Gonring said moving forward, BLM NU plans to continue its push for divestment from companies that contribute to the prison-industrial complex.