The Daily Northwestern • May 20, 2018 • https://dailynorthwestern.com/2018/05/20/city/jewish-voice-for-peace-evanston-residents-call-on-schakowsky-to-condemn-killings-in-gaza/ 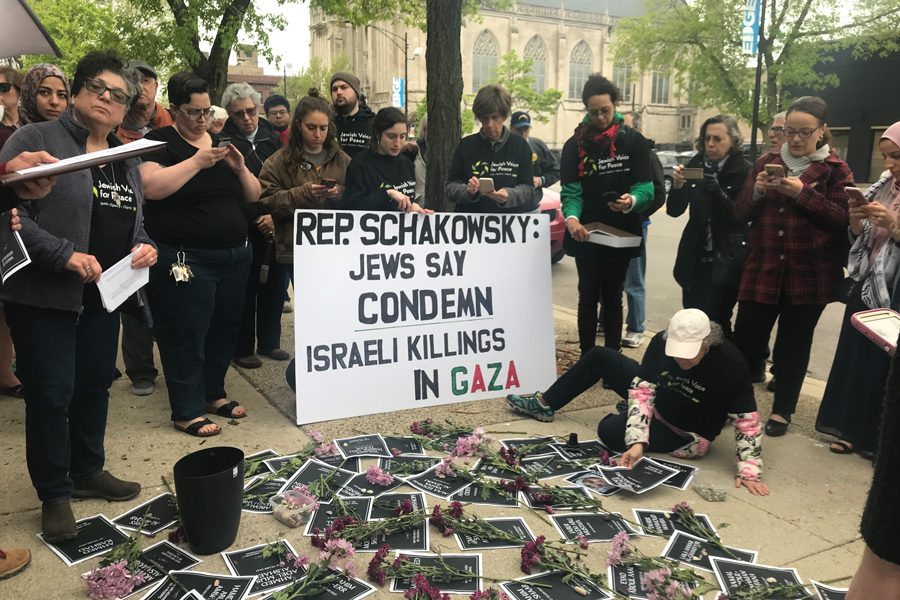 About 40 people gathered in front of U.S. Rep. Jan Schakowsky’s (D-Ill.) district office Friday to call on her to condemn Israeli forces for killing dozens of Palestinians in Gaza.

Jewish Voice for Peace Chicago, an organization that supports the human rights of Palestinians and “all peoples of the Middle East,” organized the demonstration. Participants heard from speakers and held a moment of recognition to honor the Palestinians who had been killed since March 30, when a series of protests began along the Gaza border. Several Evanston residents attended the gathering.

On May 14, Israeli forces killed at least 58 Palestinians protesting along the border on the same day the United States opened its relocated embassy in Jerusalem, CNN reported. According to CNN, it was the “deadliest day” there since the war in 2014.

Some protesters held the names of the Palestinians, and others raised signs reading “Rep. Schakowsky: Jews say condemn Israeli killings in Gaza” and “Rep Jan – How is Gaza on May 14, 2018 not like Warsaw on May 14, 1943?”

Participants also placed small stones and flowers along with the names outside of Schakowsky’s office as part of a Jewish tradition to place stones on grave sites, according to a Jewish Voice for Peace news release.

Lynn Pollack, a member of Jewish Voice for Peace Chicago, said she was drawn to live in Evanston about 40 years ago because of the progressive values the city “embodies,” but feels disappointed with Schakowsky’s recent statements about the killings.

“As a Jew for whom values of justice are intrinsically connected with my identity, I am appalled that Israel claims to do these things in my name,” Pollack said. “It’s so painful to feel the disappointment that I do in the face of (Schakowsky’s) uncharacteristic reticence to stake out a clear moral position in the face of Israel’s human rights violations.”

On April 26, Schakowsky and nine of her colleagues released a statement saying they are “deeply concerned” with the ongoing violence in Gaza and called for the Israel Defense Forces to stop using “deadly force” against unarmed protesters as well as for the Palestinians to renounce Hamas’ violence and rhetoric.

Schakowsky released another statement Thursday that said the hopes of a peaceful two-state solution for the region had been diminished after dozens of Palestinians were killed May 14.

“This cycle of violence will continue until Israelis and Palestinians decide that enough is enough and seek a sustainable solution,” Schakowsky said in the statement.

Evanston resident Lesley Williams, a member of the coordinating committee for Jewish Voice for Peace, told The Daily the situation is not an even exchange of violence as Schakowsky said, but that Israel has an “overwhelming” military might.

Williams added that after her time working with the Center for Jewish Nonviolence in the West Bank, she had seen friends “brutalized” by the Israel Defense Forces for standing up for Palestinians’ rights.

“This is not a cycle of violence where there’s responsibility on both sides,” Williams said. “There is one side that is very clearly at fault and appears to have absolutely no respect for the human rights of Palestinians whatsoever.”

Rabbi Michael Davis from the Jewish Voice for Peace Rabbinical Council led the group in traditional mourning prayers. He also spoke about the need for more people in the Jewish community to condemn the killings, which he said go against their preachings of social justice.

Williams said the group will continue to march and come out, especially because U.S. Sens. Tammy Duckworth (D-Ill.) and Dick Durbin (D-Ill.) have been silent on the issue. She added that Jewish Voice for Peace has met with Durbin and found his response, like Schakowsky’s, to be disappointing.

“We will continue to be out here demonstrating and protesting and speaking,” Williams said, “doing whatever we can to make sure that Palestinian rights are recognized.”