The Daily Northwestern • May 17, 2018 • https://dailynorthwestern.com/2018/05/17/lateststories/womens-tennis-northwesterns-tournament-run-comes-to-end-with-loss-to-duke/ 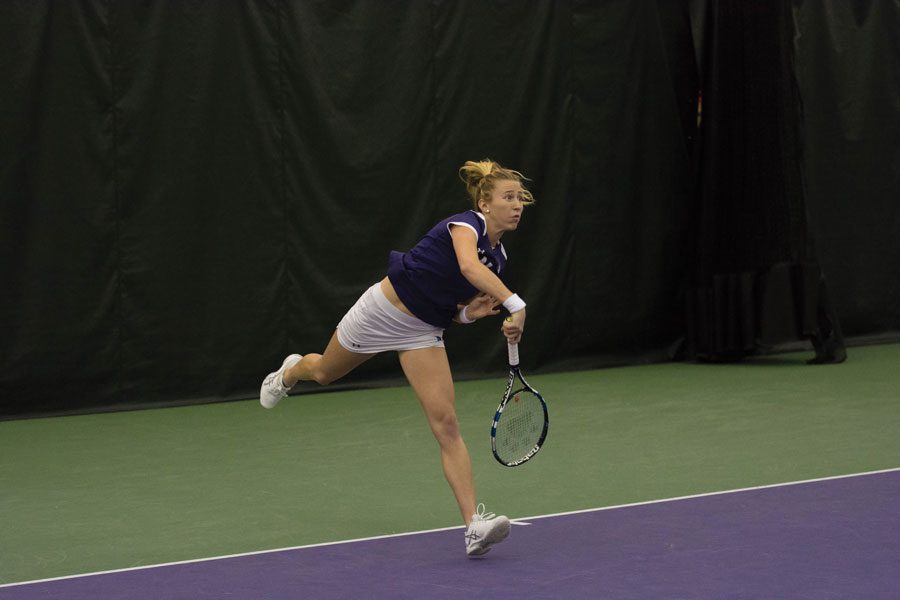 Northwestern’s NCAA Tournament run and 2018 season came to an end with a loss to Duke in the Round of 16 on Thursday.

The 14th-seeded Wildcats (23-6, 11-0 Big Ten) were eliminated from the tournament by the third-seeded Blue Devils (26-3, 13-1 ACC) by a match score of 4-0. The Sweet 16 loss in Winston-Salem marked the first time this season NU failed to earn a tally on the scoreboard.

“We haven’t seen a team as good as Duke in a long time,” coach Claire Pollard said. “That was credit to them. … They were really good from the start, and we didn’t capitalize on some early breaks that we had at one and three doubles. We got beat by the better team today.”

Having relied on the doubles point nearly all season to secure the necessary four for a match win, the Cats were unable to get wins out of their No. 1 and No. 3 doubles pairs, putting Duke up 1-0 heading into singles play.

On the backs of the nation’s fourth-ranked doubles pair of seniors Erin Larner and Maddie Lipp, NU had won the doubles point in 16 consecutive matches before Thursday’s bout with the Blue Devils. Boasting the sixth- and-ninth-ranked pairs, Duke proved too much to handle and grabbed a point that would prove crucial later in the match.

“It’s certainly a point that we’ve relied on and enjoyed this year,” Pollard said. “I didn’t think we did a great job in doubles today.”

The Cats put up a strong fight in singles. Larner at No. 1 singles and Lipp at No. 3 singles had both pushed their matches into third sets when the Blue Devils clinched the match.

With five out of its six players ranked in the nation’s top 120, Duke’s singles talent ultimately overwhelmed an NU team that didn’t get its normal support from its doubles pairs.

“That doubles point was definitely really important,” Larner said. “Duke has had a solid team all year with strong doubles as well, so we knew it was going to be close and a battle. A few points here and there, we came up just short. … I think that’s a match that could’ve gone either way, honestly, if we had gotten that doubles point.”

The Blue Devils marked the first top-10 opponent the Cats had lost to this season, racking up three such wins in a four-week stretch earlier this season.

“It was one of our best seasons,” Lipp said. “We beat the first seed, Vanderbilt, and we beat Georgia Tech who is top-five at this tournament, so it’s obviously hugely disappointing to lose today, but we had huge wins this year. It was an awesome year.”

While NU’s season as a team ended with the loss to Duke, Larner and Lipp still have much to compete for individually.

“I’m going to miss the sport, but I’ll miss playing for the school and Claire (Pollard) the most, probably,” Lipp said. “But, if Erin (Larner) and I win the doubles, then we get to play at the U.S. Open. That’s the end goal.”