The Daily Northwestern • May 17, 2018 • https://dailynorthwestern.com/2018/05/17/lateststories/womens-golf-wildcats-head-to-oklahoma-in-search-of-first-national-title/ 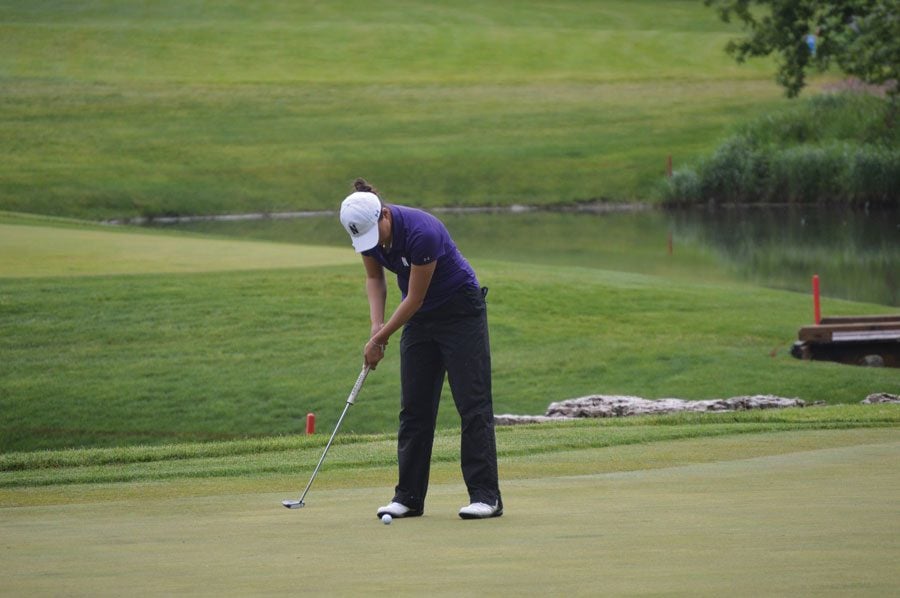 Hannah Kim hits a putt. Kim will look to propel NU to a national championship in Oklahoma.

In the past three years, Northwestern has consistently improved upon its finishes at the National Championships, racking up the three best finishes in program history.

If they pull it off again, the Wildcats will be the 2018 National Champions.

“It was a lot to live up to this year with the expectations,” coach Emily Fletcher said. “Our players felt some pressure, and they’ve earned this. They’re looking forward to going and playing.”

Riley has already proved herself by finishing fourth in the team’s regional event and dropping a sparkling 6-under final round to secure the Cats’ qualification at the national event.

“We played two great rounds of golf at regionals,” Fletcher said. “It’s just about getting the moment going at the right time … We played as good as any team the last two days.”

Kim and Cho will close historic collegiate careers as they play in their fourth straight National Championships. The duo has been part of every record-setting squad at NU.

After they both finished outside the top 50 their freshman year, both Kim and Cho played crucial roles in last year’s second-place run. Kim went shot-for-shot with individual champion Monica Vaughn in the final, while Cho picked up wins in the quarterfinals and semifinals to help propel the Cats into that final match.

“Being in the final two last year gave us some insight into what it would be like if we do it again this year,” Kim said. “Instead of thinking of it as unknown, it’s something that we are looking forward (to) and something that we’re really excited to do again.”

It won’t be exactly the same as last year’s run, however, as the 2017 Championships were held just a short drive away in Sugar Grove, Illinois. This year, NU will fly out to Stillwater, Oklahoma, and face a course none of the players or coaches had seen before Thursday’s practice round.

While the course may be new, the competition certainly won’t be. NU’s three match play opponents from last year — Kent State, Southern California and Arizona State — will all be back, as will perennial powers Alabama, Duke, Stanford and Big Ten rival Ohio State.

The Cats aren’t the only ones returning championship-caliber talent, either, as the Sun Devils will bring back three of the five starters from their National Championship squad. Even with all the intensity and pressure, Cho and the squad are still having fun.

“It’s kind of a bittersweet moment because it’s (Hannah’s and my) last one,” Cho said. “Obviously we’re all really grateful to get here. And also we’re going to Oklahoma, and some of haven’t been there yet, so it’s also really exciting.”