The Daily Northwestern • May 16, 2018 • https://dailynorthwestern.com/2018/05/16/sports/baseball-nus-pitching-staff-tries-to-carry-the-team-into-the-future/

Baseball: NU’s pitching staff tries to carry the team into the future 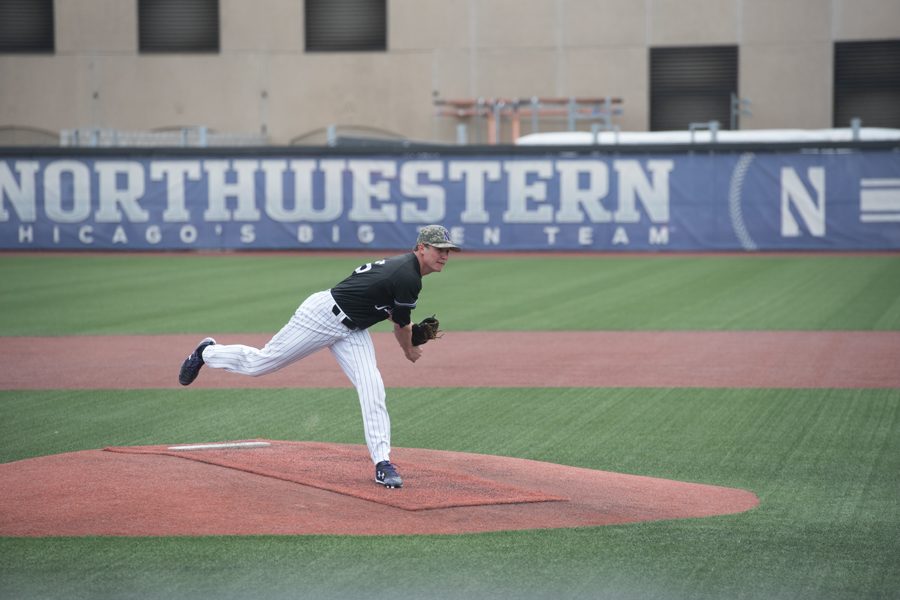 Hank Christie throws a pitch. The sophomore pitcher leads the team in games started with 13.

Two weeks ago, head coach Spencer Allen was forced to manage a difficult set of circumstances. Freshman Jack Pagliarini, who leads starters with 54 strikeouts and a 3.99 ERA, could have started and given Northwestern a better chance at staving off elimination from Big Ten Tournament contention.

But Pagliarini’s arm was tight, and the Wildcats were already 12 games below .500 in conference play heading into the series finale against Purdue.

Keeping the freshman’s future in mind, Allen rested him and the Wildcats were eliminated.

Throughout the season, Allen has faced the challenge of managing a starting rotation of three underclassmen — Pagliarini, freshman Quinn Lavelle and sophomore Hank Christie — while having four games scheduled nearly every week. And they’ve mostly been able to keep the team competitive when they start.

In their season-ending series against Belmont (17-35, 11-19 OVC), the Cats (16-30, 6-18 Big Ten) can go through the promising rotation one more time, hoping to see three more positive showings in an otherwise forgettable season.

Each of the three starters has had moments this season when they’ve used their best skills to overpower Big Ten competition. Pagliarini, whose status for this weekend is unknown, struck out eight batters in fewer than six innings twice last month — against both Michigan and Michigan State. In both games, the 6-foot-1 lefty used his fastball to blow past hitters.

Lavelle, who leads the team with 65.2 innings pitched and has a 4.52 ERA, threw a complete game shutout against Maryland in his second conference start and earned Big Ten Pitcher of the Week recognition in April. Christie pitched seven shutout innings in his most recent outing and has made it at least five innings in all but two of his conference starts.

No one else who has started more than one game this season has an ERA lower than 7.30. Allen said the Cats’ lack of pitching depth was an issue in their 19-10 loss Tuesday to Notre Dame.

“We started walking some guys,” he said. “And our pitching depth got exposed a little bit.”

NU stayed in the game early against the Fighting Irish as a result of the effort of freshman pitcher Anthony Alepra, starting his first game of the season. Alepra, who started in place of struggling spot-starters Ryan Bader and Danny Katz, was supposed to give two or three innings until he handed the reins to the bullpen. Two days after his last relief appearance, the freshman made it through five innings, allowing just two runs before fatigue caught up with him in the sixth.

“I like to go as deep as I can whenever I get the chance,” Alepra said. “The slider was working sometimes, fastball had decent location and command. That worked. The changeup was not great today, but that’s fine. That happens.”

Throughout the season, the bullpen has been pillared by Richard Fordon and closer Tommy Bourdignon, two senior relievers playing in the final games of their collegiate careers this weekend. Bourdignon leads the team with a 3.73 ERA in 31.1 innings pitched, and Fordon set career-highs this year with 31 innings pitched and 29 strikeouts.

Whether Alpera jumps next season into a regular starting role or becomes a keystone in the bullpen, the freshman is hoping to see the pieces start to come together this weekend.

“I’m hoping we can go out with a bang,” Alepra said. “Get a sweep and finish the season strong.”