The Daily Northwestern • May 16, 2018 • https://dailynorthwestern.com/2018/05/16/lateststories/former-congressman-allen-west-speaks-at-college-republicans-event/ 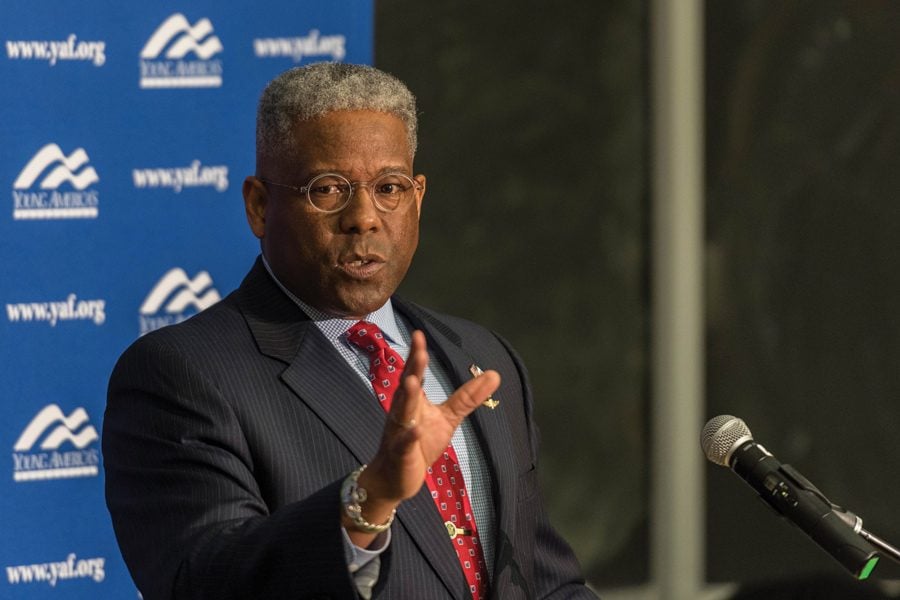 Nearly 60 people attended West’s talk. West, who served Florida’s 22nd District in the House of Representatives from 2011 to 2013, spoke about President Donald Trump’s withdrawal from the Iran nuclear deal, the potential for peace in the Korean peninsula and recent relations with China and Israel. A lengthy and sometimes heated Q&A period followed the speech.

West summarized his philosophy on foreign policy by criticizing past policies as passive.

“Peace cannot be held hostage to violence,” West said. “If we continue to be a nation that was on the path of compromising, appeasing, acquiescing to despots, dictators, theocrats and autocrats, then we put your future and the future of the United States of America at risk.”

On Iran, West said the nuclear agreement reached by the Obama administration lacked enforcement capabilities. He said under the agreement, the U.S. provided Iran with funds that went to support terrorist organizations rather than the economic advancement of Iranians. He also said leaving the deal will undermine the Islamic State group’s economic resources.

In his support of Trump’s withdrawal, West equated the Iran deal with the 1938 Munich Agreement. West said the deal was just “a piece of paper” that would not ensure peace between Iran and the U.S. just as the 1938 treaty did not force Adolf Hitler to comply.

Later, West addressed the news that Kim Jong Un threatened to cancel a planned summit with President Donald Trump regarding the denuclearization of the Korean peninsula. West said the announcement should not be given attention, as similar statements are made often. He said in future negotiations, it will be important to not allow any concessions and verify the Korean leader’s claims before loosening economic pressure.

However, West said placing economic pressure on China and making trade policy more fair is the only way to ensure peace on the Korean peninsula.

Finally, he said Trump’s decision to move the American embassy from Tel Aviv to Jerusalem is not the cause of recent Israeli violence against Palestinian protesters. Instead, he cited Hamas as the cause of unrest.

The following Q&A session became contentious at times, particularly on issues such as social inequality and gun violence.

One student became visibly frustrated when West spoke about low unemployment in response to her question on Trump’s role in increasing social inequality. West, who represented the district that includes Marjory Stoneman Douglas High School, incited debate when he said school shootings are a result of mental health challenges and are unrelated to the availability of assault weapons.

Marco Laudati, president of College Republicans, told The Daily that although the discussion was intense, engagement is important for the group.

“Just having that discourse is always beneficial for Northwestern,” the Weinberg sophomore said. “It was definitely one of our more heated ones over the past several years, but I’m happy that happened.”

Grant Papastefan, vice president of the club and a former Daily columnist, told The Daily that West was chosen for his experience in foreign policy because previous speakers this year had focused on the economy. Papastefan said West’s understanding of the issues and ability to engage with students produced an impassioned dialogue.

The Bienen junior, who moderated the Q&A, said although it was uncomfortable for him as a facilitator, people who are passionate enough to attend events where they disagree with the speaker have a right to ask questions.

“Allen West has a lot of experience, really well-developed views whether you agree with them or not, and a long history of supporting and substantiating his views to the public, so we thought he’d be a positive voice to have on campus,” Papastefan said. “Based on the event, I think that’s the case, especially when we hear from people who disagree with him.”

This story was updated to clarify Allen West’s statements about the 1938 Munich Agreement.