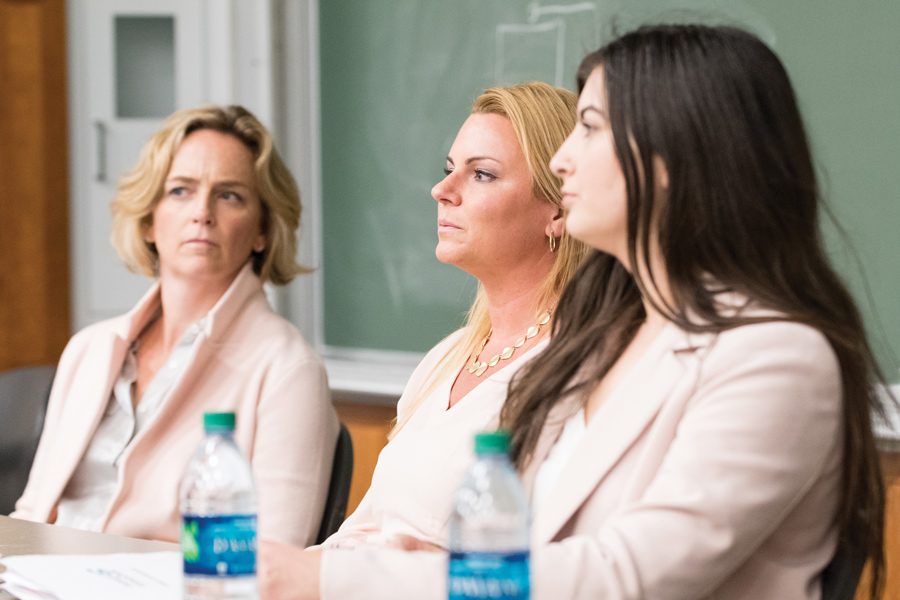 University of Chicago lecturer Mary Bunn (left) and Leena Zahra (right) speak Tuesday on a UNICEF NU panel, held during Syrian Refugee Week. Bunn and Zahra emphasized the need to raise awareness about the extent of the civil war and refugee crisis.

The Syrian Civil War and refugee crisis are emergencies unlike any other in the world today, and cannot be ignored, said University of Chicago lecturer Mary Bunn during a Tuesday panel.

Speaking at an event hosted by UNICEF NU for Syrian Refugee Week, Bunn and her co-panelists urged the audience to raise awareness of the crisis, sharing ways to spread the word around their own communities. The panel took place in Annenberg Hall in front of a crowd of about 20 students.

“The normal response to atrocity is to look away,” said Bunn, who teaches about trauma and resilience in cross-cultural practices. “We have to keep looking at this. This is not ordinary, what we’re seeing. We have to stay awake for (the purpose of) history to this profound injustice.”

Bunn said the current refugee crisis is unlike any other in history — in part due to the rampant human rights violations present throughout the country — and continues daily with little action taken.

U.S. troops launched missile strikes in mid-April in retaliation to Syrian President Bashar al-Assad’s use of chemical weapons. Still, The New York Times reported on April 15 that the attacks had changed little for Syrians living in the affected areas, and that the Assad regime remains in strict control of the country.

If conditions in the country persist or worsen, this will be the worst year yet for Syrian children since the war began, according to findings from UNICEF.

Because the Syrian refugee crisis isn’t necessarily proximal to many people in the Northwestern community, it can be hard to recognize the importance of this issue, Bunn said.

Weinberg freshman Adelaida Lopez, who attended the event, said college students aren’t always exposed to the full extent of the crisis in Syria.

“Listening to these speakers talk about their personal experiences either working with Syrian refugees or just investigating trauma in the field really gives you a clear idea (of the situation),” she said.

Panelist Leena Zahra, community program coordinator of the Karam Foundation — which provides aid to Syrian refugees — said the civil war has resulted in “the largest humanitarian crisis that we are facing, and have (ever) faced.”

Zahra said that in addition to the conditions in Syria, refugees are also increasingly facing negative conditions in the United States. Under the Trump administration, for example, anti-refugee sentiment has been on the rise, and the U.S. has accepted fewer refugees in Syria than in previous years.

Despite this, Zahra highlighted positive experiences she’s had working with refugees — including an experience in which she once helped a man get access to a car, which benefited not only him but others in his community.

“This young man went on to teach his other friends who also had been resettled and it was like a ripple effect,” Zahra said. “Instead of folks always seeing this vicious negative cycle, you’re also seeing kind of a positive cycle, with people helping themselves, and that does not always get portrayed.”

UNICEF NU co-president Amrita Krishnan said she thought the event was a success.

“I particularly enjoyed the anecdotal evidence that (the speakers) gave us,” the Weinberg sophomore said. “I thought it gave us a new perspective to their stories and it gave us something that we can’t get out of a documentary (or) a newspaper (or) online source.”