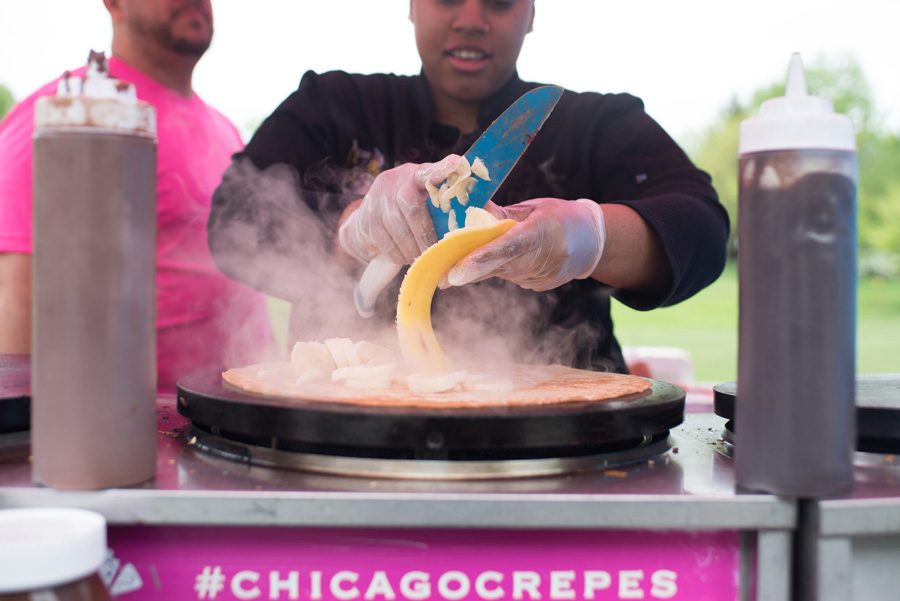 An employee prepares a crepe at SpoonFest last year. Gotta B Crepes, an Evanston creperie, will be opening a restaurant location at 2901 Central St. later this year.

It’s been 13 years since Ryan Jones and his wife Kathia Jones met working at the now-closed Magic Pan Crepe Stand in Northbrook. Since then, the couple has gone from making crepes at the national creperie chain to owning their own local crepe business, Gotta B Crepes.

Although Gotta B Crepes has been serving up made-to-order crepes at the Evanston farmers market since 2012, they recently signed the lease for a restaurant location at 2901 Central St., Ryan said, and plan on opening at the end of October.

“Just to have a home base where we can just have a location for people to come in, it’ll be great,” he said. “For Evanston, so many people come to visit and people that live there, we’re just adding another great option for people to go out to enjoy a nice meal.”

The couple first started making and selling their own crepes in 2010 when they lived in Chicago, Ryan said. Back then, they’d make crepes in their home and sell them out of their garage for $1. But when they moved to Evanston, he said they decided to begin cooking in a commercial kitchen.

Ryan said a space opened up near their house when food incubator Now We’re Cookin’ changed locations about two years ago, and Gotta B Crepes moved into its former kitchen. But there was a problem: the space didn’t have room for sufficient seating.

Kathia said the new Central Street location will be simple and elegant, with large windows for natural lighting and plenty of seating. Ryan added that the service will be quick, akin to what Gotta B Crepes offers at the farmers market.

“You can come in and have a crepe made to order for you and take it out with you to go,” Ryan said. “(Or) just sit in front of the window and eat the crepe, and maybe meet up with friends or family (or) come in by yourself.”

The space was previously occupied by Rose’s Bakery but has been vacant for about two years, Paul Zalmezak, Evanston’s economic development manager, said.

Zalmezak said it’s great that the space will be put to use, especially by an Evanston-based business. He added that in addition to operating out of the restaurant, Gotta B Crepes also caters.

“Central Street is always pretty solid; I think (Gotta B Crepes) further stabilizes it,” Zalmezak said. “It’s a big chunk of space so I’m glad they were able to rent it. Having active businesses is really important.”

Although there are many places to grab food in Evanston, Ryan said he and Kathia hope the passion they bring to their creperie will stand out. After all, he’s worked in the crepe business for 14 years, he said.

Ryan said he is excited for the opportunity to continue feeding people even after the farmers market season is over, and to continue developing a business that helped him and Kathia grow their life together.

“We are nervous but we’re excited for the chance to really to take our shot at a restaurant,” Ryan said. “We just hope to listen to what people want, and just give it to them the way it’s gotta be.”