The Daily Northwestern • May 16, 2018 • https://dailynorthwestern.com/2018/05/16/city/council-advances-17-story-age-restricted-residential-building/ 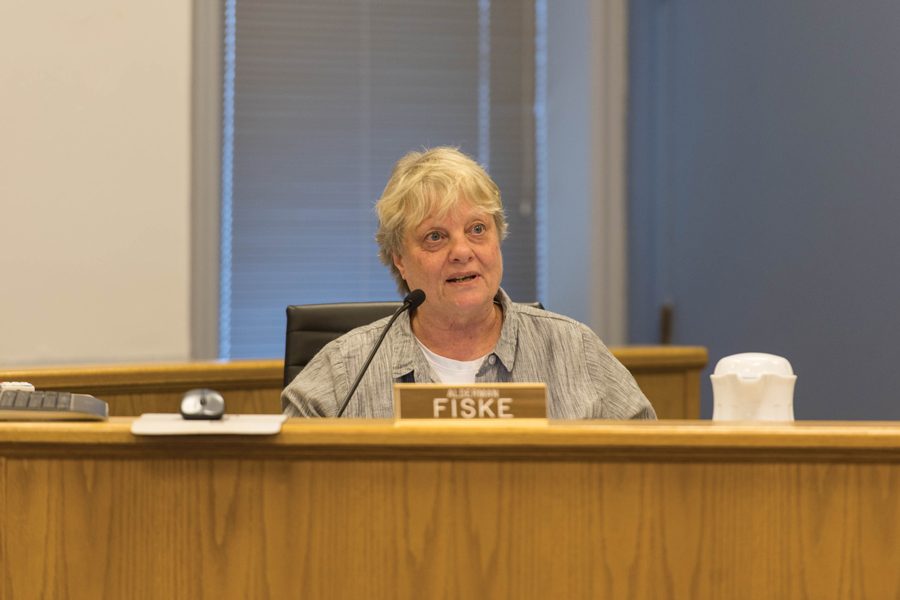 Ald. Judy Fiske (1st) speaks at a council meeting. Fiske voted against the development of a 17-story active living facility due to concerns about the impact on traffic.

Aldermen at Monday’s council meeting approved for introduction a permit for a proposed 17-story age-restricted residential building on Oak Avenue.

City Council voted 7-1 to advance the special permit for the development at 1727 Oak Ave. Ald. Judy Fiske (1st) voted no due to concerns about an increase in traffic on Ridge Avenue, which she said is already a congested road.

“I can tell you that even in the best weather, not winter conditions or snow conditions, this was a very tight road to travel, and I’m really concerned about that,” Fiske said. “In snowy weather it was almost impossible.”

The building features 169 units for seniors to reside in a “active living” environment. Johnny Carlson — principal of the developer Trammell Crow Company’s Midwest Business Unit — said the model satisfies a need for seniors who are looking to live in an urban environment and are not yet ready to move into an assisted living facility.

According to city documents, the development would offer housekeeping, transportation and meal services as residents need or request them, rather than automatically include them like is the case in an assisted living facility. He said the age restriction on the facility is 55 and up, though the average renter in these buildings is usually 72 or older.

“Really it’s a way for people in Evanston to unlock their housing equity, convert from a homeownership to a rental as they age and stay in the community,” Carlson said. “That is really where we see the demand of the Baby Boomer rental.”

If approved, the facility will provide residents with a variety of social activities, including workout classes, bridge clubs and movie nights, according to city documents. There will also be a public dog park and 17 affordable housing units.

Ald. Peter Braithwaite (2nd) said in a comment section at the Planning and Development committee meeting that he supports the development, particularly after discussing the building with residents at ward and neighborhood meetings.

“My reason for supporting it is just basically I think it’s a wonderful opportunity to create much-needed senior housing in our town,” Braithwaite said.

The developer initially proposed to pay $1.7 million as a fee-in-lieu payment to comply with the Inclusionary Housing Ordinance, but decided to instead provide the required number of on-site affordable units, according to city documents.

Carlson said the developer decided to provide the units at a $3.5 million loss because they would benefit the public. Ald. Melissa Wynne (3rd), however, said she is not satisfied with the list of public benefits the developer provided, saying items like affordable housing and taxes are required by law, so they should not be considered to be additional items that make the development unique.

Wynne also said she has concerns about the increase in traffic since the development’s approval would make the corner of Ridge and Chicago Avenue go from a C to a D traffic rating. She added that the planned 10-story senior living development at 1815 Oak Ave. will already have an impact on the congestion in the area.

Wynne said she is particularly worried about the impact the traffic will have on a community aimed at 55 and older residents, especially because the road serves as a truck route.

“It is an enormous change that’s going to happen here in this relatively small block and with the addition of 1815 Oak it’s unpredictable of what’s going to happen,” Wynne said. “Then have 1727 Oak added to it, I think we’re going to have a lot change and… we’re just hoping for the best.”