The Daily Northwestern • May 16, 2018 • https://dailynorthwestern.com/2018/05/16/ae/spectrum-theatres-project-nu-show-explores-connections-on-campus/ 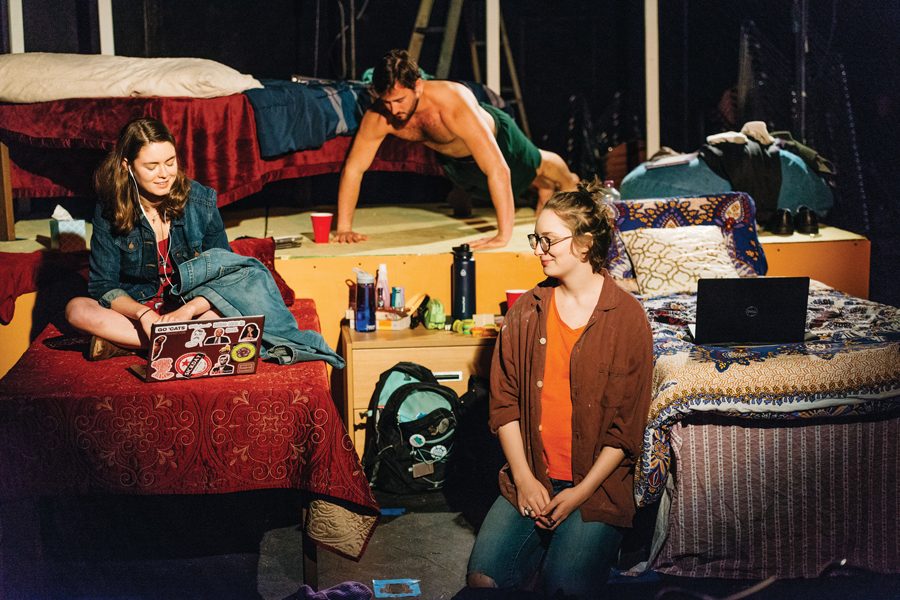 Students rehearse for Spectrum Theatre’s Project NU show “Where the Water Meets the Rocks.” The show opens Thursday and is based on real stories of NU students, staff and faculty.

As someone who just wants to “lay in the grass and make art,” Communication sophomore Shane Eichstaedt said they struggle to navigate the fast-paced “culture of productivity” at Northwestern. When the pressure gets to be too much, Eichstaedt said it is the people at NU who keep them here.

This, Eichstaedt said, is what drew them to direct Spectrum Theatre’s Project NU 2018 show, “Where the Water Meets the Rocks.” The play follows seven main characters — including a frat star, a cute nerd, a McCormick dropout and other familiar personalities — through a year in their lives at NU.

“Where the Water Meets the Rocks” is based on interviews with NU students, staff and faculty whose stories were selected and pieced together during Winter Quarter. The show opens Thursday and runs through Saturday at Shanley Pavilion.

“It’s all about the Venn diagram of us, where we overlap and where we just barely miss each other — from best friendships, to new and old romances, to polite smiles on Sheridan Road to that one person you see in Norris,” Eichstaedt said. “We all bob and weave out of each other’s lives.”

Eichstaedt said Spectrum Theatre’s focus on socio-political theater allows them to draw attention to important issues through storytelling. Amid a “lack of empathy” in the world, Eichstaedt said telling stories can evoke and grow compassion within the NU community.

Communication sophomore Zoe Johnson, the play’s head writer, said she heard mixed responses about whether those at NU have found their niche on campus. Johnson said while the college environment can be isolating, she hopes the show encourages audience members to find comfort in their friends.

“It’s really important that when you’re going through things, you lean on other people,” she said.

Johnson added that “Where the Water Meets the Rocks” goes beyond the theater community and tries to incorporate many diverse perspectives across campus, including first-generation students and people with mental illnesses.

Communication sophomore Dana Pepowski plays Kirsten, a first-generation transfer student who is in a long-distance relationship. Pepowski said she really resonated with one of Kirsten’s monologues, which reminded her of times she felt lonely at NU herself.

Being part of Project NU, she said, has made her realize others share similar experiences.

“(Finding your place) is a process and there’s never going to be an endpoint,” Pepowski said. “Listen to people around you. That does not necessarily mean it’s always gonna be comfortable, but that’s the best way to show love to other people.”

Pointing to Spectrum’s mission statement — “inspiring dialogue in audiences” — Eichstaedt said people should be unafraid of questioning NU as an institution and hope they do so constructively.

Eichstaedt said they aspire to create theater that is an “inclusive and boundary-breaking” space where everyone feels welcomed. The sophomore said working on “Where the Water Meets the Rocks” has reminded them to keep a broad view of NU and connect with people outside of their circles.

Eichstaedt said they hope audience members can find themselves in the play.

“I hope people leave feeling at least for one second, one line, one monologue, one scene: that’s me, that’s true, that’s real,” Eichstaedt said.