The Daily Northwestern • May 16, 2018 • https://dailynorthwestern.com/2018/05/16/ae/chainsmokers-the-musical-parodies-social-media-millennial-culture/ 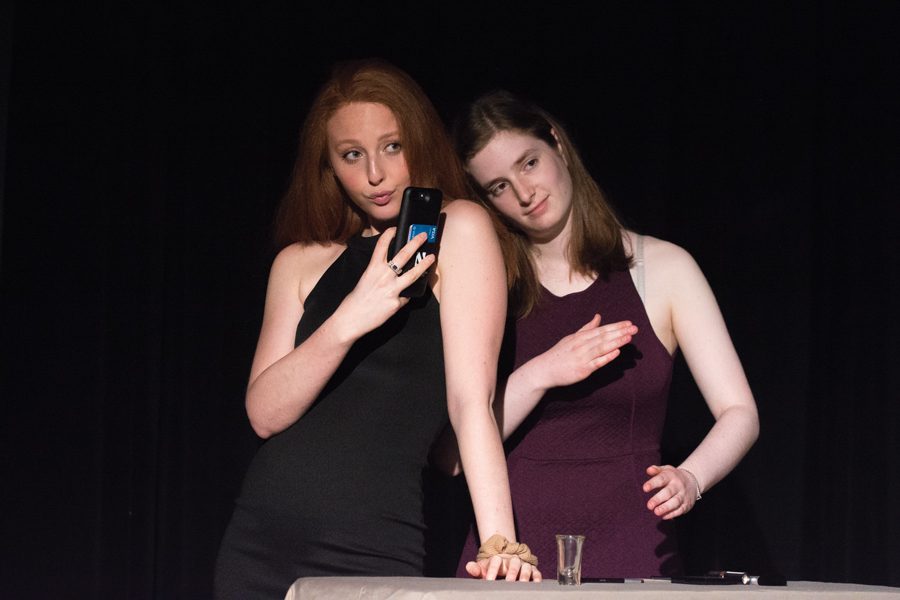 Two actors perform in a rehearsal for “Chainsmokers: The Musical!” The show premieres Friday, featuring an original script and songs by The Chainsmokers.

When Communication senior Devon Kerr first listened to the song “Closer” by The Chainsmokers ft. Halsey, he thought it seemed straight out of a musical.

“It kind of sounded like a musical number because the singers are saying exactly what’s happening,” Kerr said. “I thought, ‘Wouldn’t it be funny if I wrote a whole plot with all The Chainsmokers songs?’”

What started as Kerr’s passion project transformed into “Chainsmokers: The Musical!,” which premieres Friday at Alvina Krause Studio. Kerr described the show as “‘Mamma Mia!’ but with Chainsmokers songs” and said the parody weaves together his original script and hits from the EDM duo. The musical is put on in collaboration with the Department of Performance Studies and will also be available online.

The show, Kerr said, revolves around a group of 20-somethings desperate for modern fame and impact: One character is an online health and wellness guru, while another longs to be a popular DJ. Kerr said the musical pokes fun at the social media-focused culture many college students are immersed in today.

Kerr said he used The Chainsmokers as his muse because he believes they highlight many nuances of millennial culture.

“(The Chainsmokers) are a really fascinating lens to look at our generation with because they’re pretty smart people. … They’re pretty self-aware but they still do these behaviors and say these things that are very problematic,” Kerr said. “They just are very representative of our generation.”

Weinberg junior Jack Goss plays Max, the aspiring DJ who is one of the main characters in the show. Goss said he first became involved with the parody because he was drawn to the “ridiculous” concept of the script.

Although he isn’t a fan of The Chainsmokers himself, Goss said their music offers an insight into the escapism millennials crave, pointing to the song “Paris” as an example.

“It’s the generation that grew up on the Internet but also through financial crashes and a huge lack of hope for a lot of people,” Goss said. “As bad as I think their music is and as shallow as I think it is, I do think it speaks to our desperate reaching for something that will get us out of a lot of the trouble we live in.”

Communication junior Nick Holterman, a co-producer of the show, said he sees The Chainsmokers’ music as a “weird soundtrack to college” because many of their biggest songs hit the charts during his time at Northwestern.

Using their songs in the show, he said, was a way to comment on the “cultural trends” of the moment — from the prevalence of Instagram influencers to the rise of GarageBand EDM producers.

Kerr said although the show is satirical in nature, he doesn’t think The Chainsmokers would mind, noting the duo often enjoys remixes of their work. However, out of caution, he spoke to an intellectual property lawyer, who assured him the musical is legal — both under parody law and because it is being put on “for educational purposes.”

All in all, Kerr said he wanted to create something NU students could see themselves in.

“I feel like a lot of the (theater) here is like, ‘This is about a divorced, Southern family in rural Mississippi,’ and that’s fine and all, but that’s not necessarily relevant to the people who go to Northwestern,” Kerr said. “I wanted to write something that really spoke to them.”