The Daily Northwestern • May 13, 2018 • https://dailynorthwestern.com/2018/05/13/sports/lacrosse-wildcats-advance-to-ncaa-quarterfinals-with-historic-weekend-wins/ 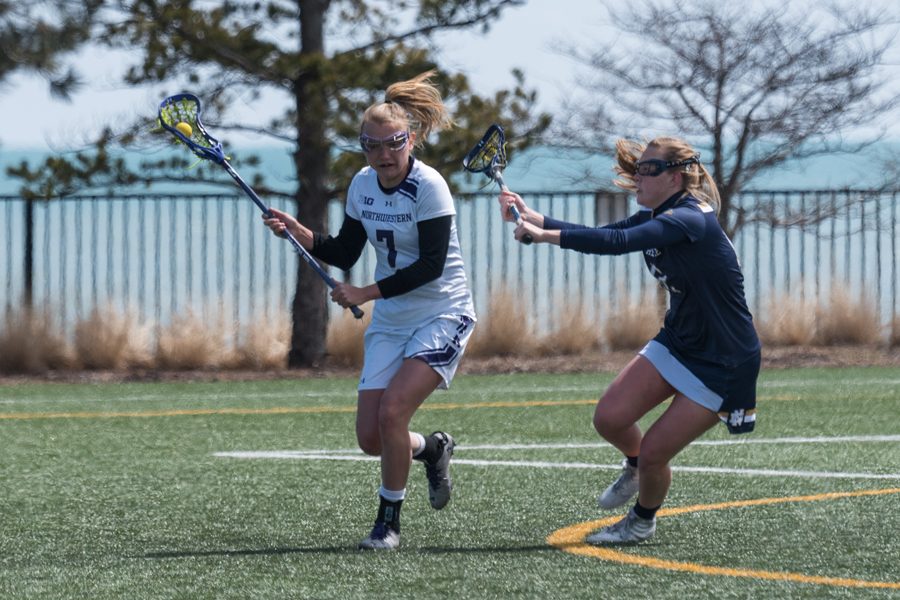 Sheila Nesselbush looks to evade a defender. The senior midfielder scored 14 goals in two games this weekend to help Northwestern advance through the NCAA Regionals.

With under 25 minutes to play in Northwestern’s second-round NCAA Tournament matchup against No. 7 Towson, senior attacker Shelby Fredericks held her stick out and signaled a message to her team: Settle down.

The Wildcats (15-5, 5-1 Big Ten) had just gone up 11-10 on the Tigers (16-5, 5-1 CAA), their first lead since the opening minutes. The two teams were trading goals back and forth, but neither was gaining anything more than a one- or two-goal advantage. Coach Kelly Amonte Hiller said at that point, they felt it would be the calmer team that came out on top. Their patience prevailed.

Junior attacker Selena Lasota found the ball on the left side of the goal and fired her fourth goal of the game to put NU up 12-10. Towson called a timeout, but it didn’t stop the momentum that came from Lasota’s score.

The Cats rattled off two more unanswered goals, part of a five-goal run, and they rode that momentum all the way, for the first time since 2015, into the NCAA quarterfinals.

Lasota and senior midfielder Sheila Nesselbush scored eight goals each to power NU to a 21-17 win over the Tigers on Sunday afternoon in Towson, Maryland. In Friday’s 24-18 first round win against Richmond (16-4, 8-1 A10), the pair combined for 15 goals — 9 from Lasota, 6 from Nesselbush — totalling a whopping 34 points on the weekend.

“They’re the heart and soul,” Amonte Hiller said of the duo. “Everyone really stepped up, but I think they ran their key plays, (and) when you have people finishing like that, it’s huge.”

Nesselbush’s eight-goal performance on Sunday was also her career-best, beating the previous high she set Friday. Lasota’s career-high 9 goals against the Spiders set the NCAA Tournament single-game record, while the team’s 24 goals were its most this season and the program’s most in a game since 2011.

Lasota and Nesselbush went a combined 8-for-8 from the free position on Sunday. The team as a whole went 9-for-10 on the chances, the Cats’ best percentage this season.

“There’s a lot of times where we’ve lost games and we’ve focused just on free position shots,” Lasota said. “Those shots … they can predict the game, so I’m glad and proud of us for that number.”

Towson entered the game with the country’s fifth-best scoring defense, allowing an average of 8.8 goals per game, while also owning the fourth-best free position percentage in the nation at 52 percent. The Cats held the Tigers on both ends; Towson allowed a season-high 21 goals, and went just 5-for-11 from the free position.

Facing a zone defense, NU found cutters in front of the goal through the eight-meter arc and drew shooting space calls to earn the free position shots. That strategy showed its success at the end of the first half, when the Cats scored two goals in under a minute to tie the game heading into the break.

“We were forcing it a bit,” Lasota said. “And then the coaches brought us in and said, ‘Look, we’re getting good looks, but they’re the first looks, so just settle it down and keep the ball moving,’ and that’s when we got a lot of our opportunities.”

NU also employed a zone defense, a switch from its usual man-to-man front, for much of the game to hinder Towson’s attack. The Cats held the Tigers without a goal for more than 10 minutes near the end of the second half, causing three turnovers and three unsuccessful shots while building a four-goal lead.

While Nesselbush hasn’t advanced this far into the tournament since her sophomore year, she didn’t let the occasion or her historic performance this weekend overshadow the team’s mission.