The Daily Northwestern • May 13, 2018 • https://dailynorthwestern.com/2018/05/13/campus/national-pan-hellenic-council-secures-plot-space-at-scott-hall-in-push-for-greater-campus-recognition/ 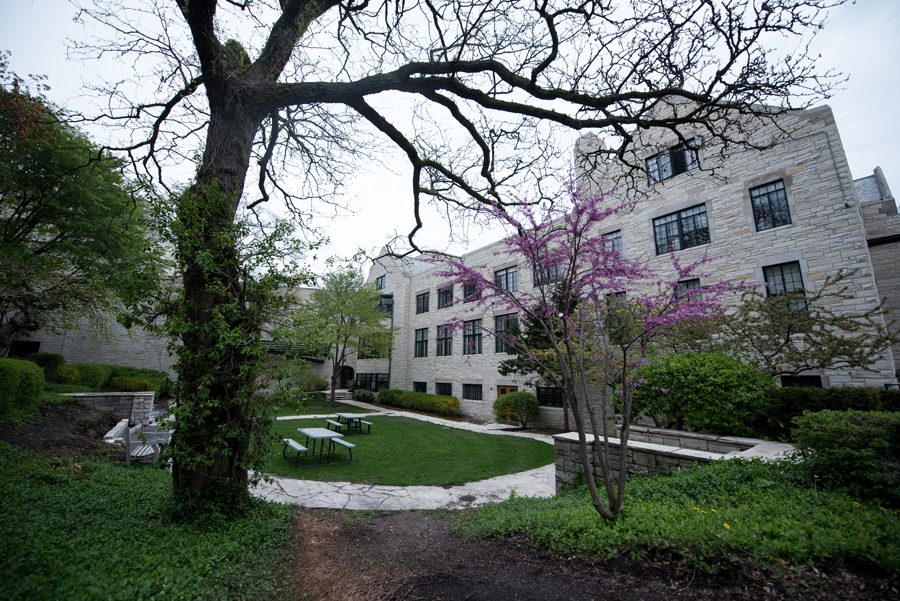 Scott Hall’s outdoor courtyard area at 601 University Pl. The National Pan-Hellenic Council and Office of Fraternity and Sorority Life are working to develop commemoratory plots for each council chapter in the space.

In its push for greater campus recognition, the National Pan-Hellenic Council is working with the Office of Fraternity and Sorority Life to develop commemoratory plots for each chapter in Scott Hall’s courtyard space, OFSL director Travis Martin said.

Each plot will take the form of a monument with plaques displaying both the national organization’s information as well as specific chapter information, said Martin, who also serves as the NPHC adviser. While five chapters are currently active on campus, Martin said plots will be developed for all nine national historically black fraternities and sororities, and if they later gain a campus presence, chapter-specific plaques will be added as well.

As NPHC chapters and those in the Multicultural Greek Council often get spoken of in conjunction, Martin said he hopes the initiative can help students begin to recognize their individual distinctions as two separate councils.

“We tend to lump MGC and NPHC together, but I want to make sure people understand they are two distinct councils, with two distinct cultures,” Martin said. “We want to recognize the history of why these groups were founded.”

Nationally, many other colleges and universities including Indiana University, Duke University and Virginia Tech have undertaken similar initiatives to provide a physical representation of NPHC chapters on their campuses.

Construction of the Scott Hall plots has already begun and is projected to be finished this summer, Martin said.

“Given the fact that we don’t have houses and our membership isn’t ever going to be rivaling that of IFC and PHA, it’s important for a university like Northwestern to recognize the fact that we are on this campus, and that we’ve had a huge impact on not only the black community, but Northwestern in general,” he said.

For now, the Scott Hall courtyard space will be available to NPHC chapters as plots are being developed, and Martin said he hopes groups will use it, particularly for new member presentations or other ceremonial events — similarly to other universities.

Still, Wallace said his chapter — among others in NPHC — is put at a disadvantage from the lack of space to hold community events and recruit new members. Providing the council with tangible recognition, he said, can help “level the playing field.”

“The composition of the student body puts us immediately at a disadvantage,” he said. “Having black organizations, multicultural organizations at a PWI, we’re just never going to have those huge numbers that you’ll see at an HBCU and schools like that.”

Just as many MGC members have expressed concern with the current lack of on-campus space for chapters, students in NPHC organizations said establishing a greater presence at NU is vital.

Brittany Owens, president of NPHC sorority Zeta Phi Beta, said while the Black House and Multicultural Center exist as spaces for students of color, they shouldn’t be the only designated places on campus where chapters can organize.

“If the University actually gave NPHC — and MGC as well — space that’s more central to students on campus, it would definitely help with visibility,” the Weinberg junior said. “Technically people do have a space to go to, but just because we have the Black House doesn’t mean we don’t need additional space.”

For chapters, she said it can be challenging to build connections and establish roots in the black community because a lot of students don’t know NPHC exists. Owens said while the University extends support to predominantly white Greek councils, it often feels like that isn’t the case for those primarily composed of students of color.

Despite that, Wallace said OFSL has recently been “really supportive” in advocating for greater visibility of NPHC chapters.

Moving forward, he said “more intentional” efforts from Northwestern are essential in promoting NPHC’s presence on campus and providing the council with greater University-based infrastructure.