The Daily Northwestern • May 10, 2018 • https://dailynorthwestern.com/2018/05/10/lateststories/lacrosse-northwestern-heads-to-ncaa-tournament-for-first-round-date-with-richmond/ 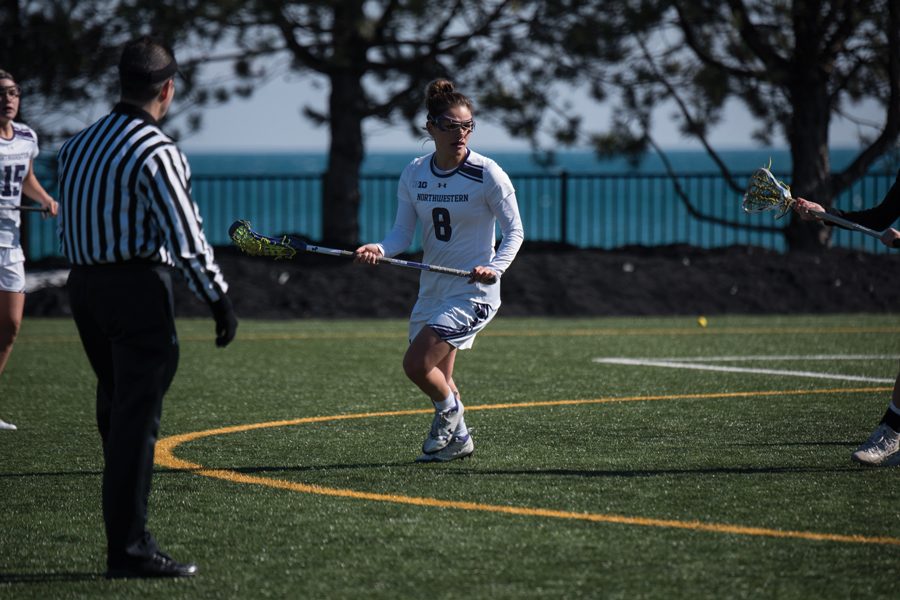 Danita Stroup looks to make a pass. The senior attacker scored 9 goals in two games in last year’s NCAA Tournament and will be looking for more this weekend.

As a player at Massachusetts, midfielder Hannah Murphy faced Richmond eight times during her career. Murphy’s Minutewomen went 7-1 against the Spiders, with her tallying 7 goals and 10 points in those games.

Now, Murphy is seeking a win in her first game against Richmond as a Northwestern assistant coach, a position she assumed after graduating following the 2017 season.

“Hannah’s given us some insight into Richmond; she knows them pretty well and how they play,” coach Kelly Amonte Hiller said. “That’s been our edge in terms of knowledge.”

The No. 7 Wildcats (13-5), one week after a surprising semifinal exit in the Big Ten Tournament that ultimately cost them the opportunity to host an NCAA Tournament regional, will face the Spiders (16-3) on Friday in the first round of the tournament.

They were assigned to the Towson, Maryland, regional bracket and — with a win Friday — would face the victor of the first-round matchup between 7th-seeded Towson (15-4) and Wagner (14-5) on Sunday. Amonte Hiller said the team is ignoring its ongoing two-game losing streak and instead focusing on this weekend’s opportunity.

“It’s just a special opportunity to make the NCAA Tournament, so obviously it would’ve been great to host, but we’re just really excited to be in the tournament and to be together at least until Friday,” she said. “The past is the past.”

It is Amonte Hiller’s 15th tournament berth in her 17 years of coaching in Evanston. Last year, NU downed Albany in the first round before being eliminated in the regional final by Stony Brook.

Senior attacker Danita Stroup said she thought at the time that weekend would be the end of her collegiate career, and she made the most of it by scoring a whopping 9 goals in the two games combined. After receiving an extra year of NCAA eligibility, she’s hoping to replicate that productivity this weekend.

“Getting this extra life is a real (great) feeling,” Stroup said. “I’m really excited to be able to go out there again.”

If the Cats get past Richmond and Towson predictably routs Wagner, Sunday’s matchup will pit NU against a Tigers team that has impressive wins against Penn State, Florida and Johns Hopkins this season and boasts three 40-plus goal scorers on its roster. But first, Richmond will likely pose a stiff defensive challenge for the likes of Stroup and her fellow attackers.

The Spiders have won 11 of their last 12 games, including a dramatic overtime victory over now Murphy-less Massachusetts in the Atlantic 10 championship last Sunday. They’ve allowed just 8.6 goals per game this season, the third-fewest in the country, and they also rank highly in save percentage (8th nationally) and caused turnovers (12th).

Junior attacker Holly Korn, a dynamic weapon for NU with her 6-foot-2 height, said the Cats nevertheless aren’t focusing much about Richmond’s specific strengths and weaknesses.

“They’re definitely very strong defensively, but it really doesn’t change our game plan that much,” Korn said. “We know that the offense that we run is really dangerous against any defense, so it’s just going to be (about) doing what we do and not worrying too much about what they’re doing.”