The Daily Northwestern • May 10, 2018 • https://dailynorthwestern.com/2018/05/10/lateststories/at-news-conference-student-activists-discuss-demands-delivered-to-administrators/ 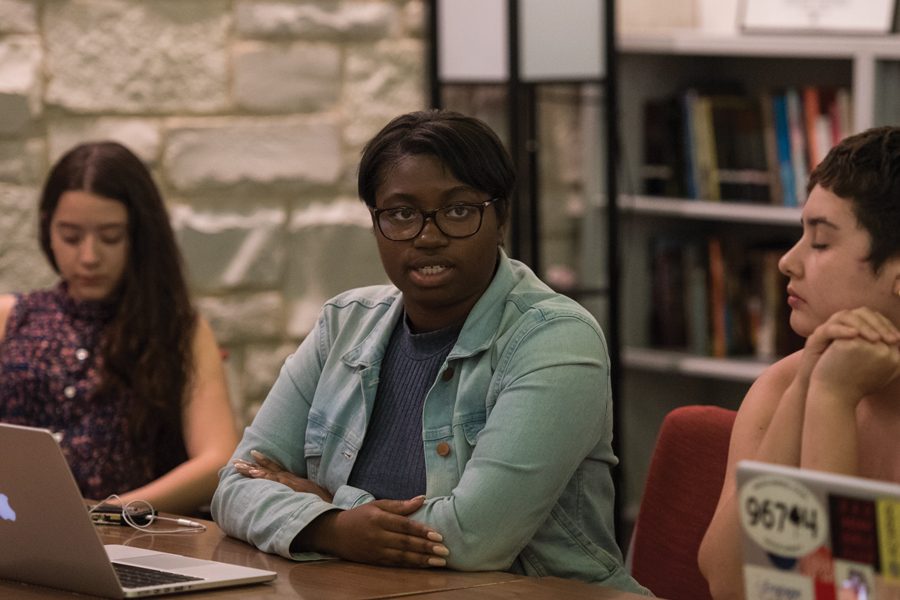 Student representatives from Black Lives Matter NU, the Latinx Asian American Collective and Students Organizing for Labor Rights discussed their list of 47 demands to the University at a news conference Wednesday night.

The list of demands — released last week on the 50th anniversary of the Bursar’s Office Takeover — urges the University to improve campus culture for black students, departmentalize the Asian American Studies and Latina and Latino Studies programs, and provide a smooth transition for food service workers.

At the news conference, representatives from the three groups emphasized that they want a clear, active response from administrators.

“When lots of people come together, we get more power that way and there is more visibility and things get done,” said Seri Lee, a Weinberg sophomore.

BLM NU included 36 demands in the list, including one urging the University to fully acknowledge its oppositional role throughout aspects of the Bursar’s Office Takeover. BLM NU called for the University to increase representation and resources for students, faculty and staff as well as recognize the history of student activism involved in the evolution of black student experiences at NU.

Lee said representatives released the list on the 50th anniversary of the Takeover “strategically” to increase visibility among community members.

“For the Latinx Asian American Collective, one of the really frustrating things that’s been going on in the meetings we’ve already had with the administration is they’re very wishy washy,” Weinberg junior Jessica Wang said. “They like to beat around the bush a lot, they like to say, ‘This is a possibility, but we don’t really know if this can happen, and if it would happen we don’t really know how or when.’”

The third group, Students Organizing for Labor Rights, demanded in the list that in the dining transition process, both Compass Group North America and NU stop using the service E-Verify — which checks if employees are eligible to work in the U.S. — for current campus service workers. On Wednesday, Compass and UNITE HERE Local 1, the food service workers’ union, announced they’d come to an agreement for the transition period.

The list gave the University two weeks to agree to all the demands, and Communication junior Danielle Dougé did not disclose what the group would do if the demands are not met by then.

Still, Dougé said, the strict deadline will help keep administrators “on their toes” and remind them they are “accountable to us as students.”

Dougé said although the University takes “some action” to alleviate students’ concerns, there remains an “issue with transparency.”

“(The University creates) committees, and they have people who sit and talk about how to fix an issue, but a lot of students don’t know,” Dougé said. “We’re sitting here and we’re waiting for things to get done, and they’re sitting over there and they’re talking.”

“We’re trying to reach a finish line, and sometimes when you have to pass the baton, you don’t want it to fall,” Dougé said.