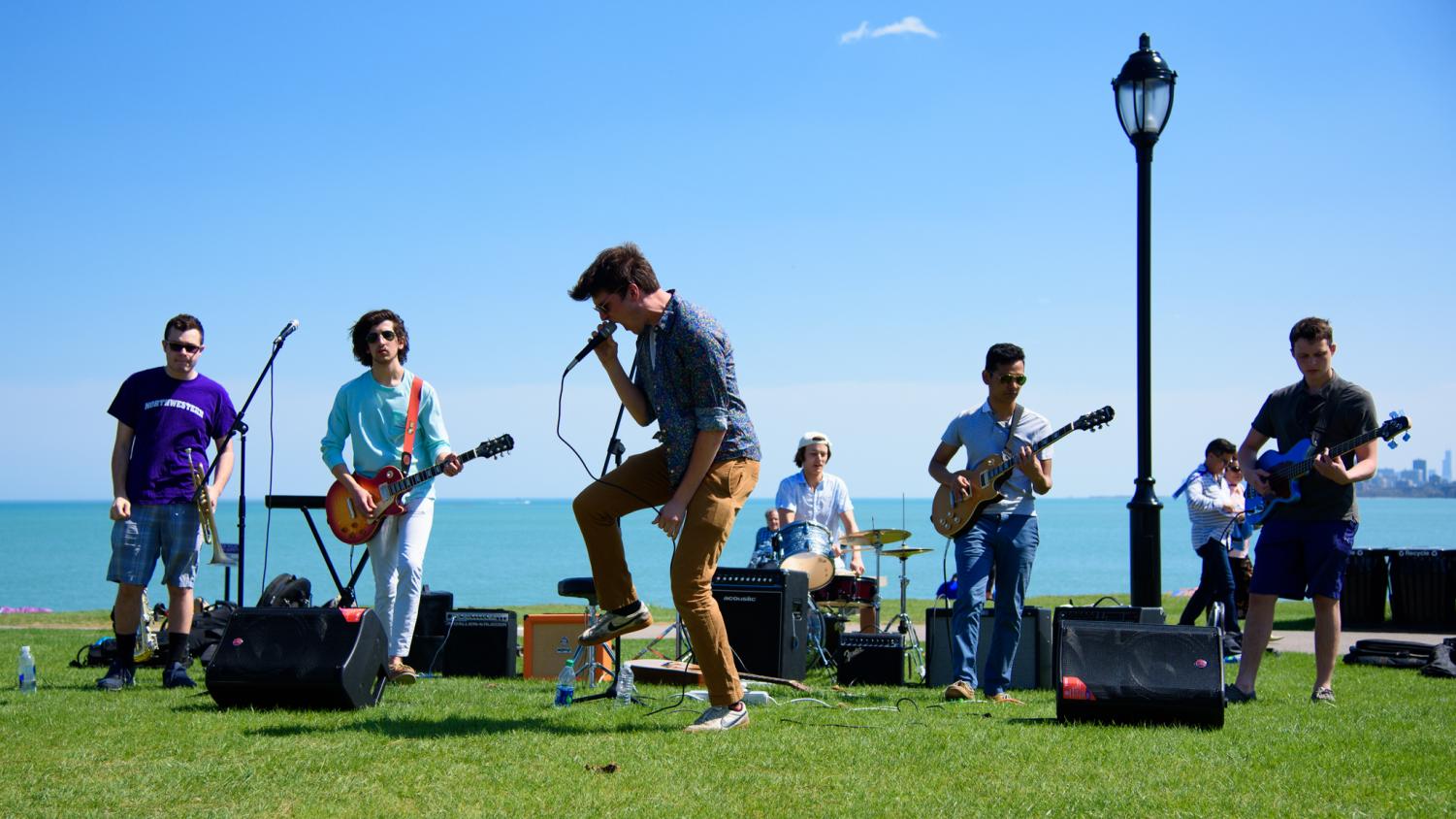 Created by and for music lovers, The .WAV Company grows its presence on campus

When nearly 200 people showed up to The .WAV Company’s first concert on Feb. 23 — nicknamed The Juul and Soylent Show — co-president Gibran Wirjawan knew he was doing something right. The show proved to be so successful that even the Evanston police made a surprise appearance at their venue, the infamous Ski House, that night.

Wirjawan said he did not expect .WAV, a student-led music initiative, to take off at “such a drastic, high-speed level.” However, as a musician himself, Wirjawan said he has always been hyper-aware of the demand for an inclusive music scene on campus.

“I’ve had this personal struggle throughout my life of not being able to find the right people or the right place to perform and write music with,” the Communication sophomore said. “A lot of other people have similar wants and needs … to be with people who are musically inclined.”

Wirjawan originally pitched his idea for a music startup to The Garage. However, the idea did not come to fruition until he crossed paths with Weinberg sophomore William Ouyang, who similarly envisioned a student initiative to support the campus music scene. And so, The .WAV Company was born, with the two as co-presidents.

.WAV has grown rapidly since its inception last quarter, offering weekly shows and workshops as well as larger concerts. Wirjawan said the group now has between 150 and 200 members, a number that encompasses performers, photographers, videographers, graphic designers and many music lovers who are just along for the ride.

Inclusivity is central to .WAV’s group ethos. Communication sophomore Nico Fernandez, internal vice president of .WAV, emphasized the executive board’s commitment to creating a space for people with all levels of music experience.

“We’re trying to keep ourselves with the central themes that we founded it on: being a space for people who have never picked up a guitar before, to people that have albums out and are going out and touring,” Fernandez said.

Fernandez said there is also a component of “openness” to teaching and learning in the .WAV philosophy. Someone who has never performed before can come in and ask a seasoned musician for advice, or an aspiring photographer can learn to create music videos for the group, he said. This mentality translates into weekly workshops that cover everything from songwriting to video production.

For Wirjawan, the desire to mentor other musicians drives much of his involvement in .WAV.

“The reason I really wanted to be the leader of all this is because I’ve spent a lot of time doing all these things on my own,” Wirjawan said. “I’ve learned a couple things along the way, and I would like to help people not make the same mistakes that I made and be able to pursue these passions a lot better.”

Wirjawan, who is the lead singer and guitarist of campus band Unpopular Opinion, underscored “the grind” as a crucial part of his journey as a musician. In his experience with Unpopular Opinion and his former band, Kodiak Grove, Wirjawan said releasing original music on streaming platforms and playing consistent gigs were central to the bands’ successes.

Unpopular Opinion has headlined many .WAV concerts, including its largest event to date, Pi Night. The executive board arranged Pi Night as a kickoff event at La Macchina Cafe during reading week of Winter Quarter, Wirjawan said.

Pi Night featured student musicians from a wide variety of genres. The show opened with some singer-songwriter acts, including Communication freshman Haley Davis, who said she performed at the event after finding a supportive community at .WAV’s songwriting workshops.

“I really like the .WAV audience, because even if you mess up a little bit, it’s such a laid-back environment,” Davis said. “The goal is to give you an avenue to practice performing.”

Other Pi Night performers included the bands We’re Not Friends and Wop St. Bass Ritual. Both groups were born out of .WAV jam sessions, thanks to a bit of matchmaking done by Wirjawan.

Communication sophomore Ross Patten said his band, We’re Not Friends, formed when Wirjawan “threw a GroupMe together and was like, ‘You’re playing a gig on Friday.’” Now, the band has become a fixture at .WAV concerts including Pi Night, Blooming Nights in Booming Heights and Lakefill Jams.

The Facebook event for Lakefill Jams, which was held Saturday and was co-hosted by Niteskool Productions, advertised “good weather, good vibes and even better music.” With Evanston temperature in the 80s and a peak turnout of nearly 150 people, the concert delivered exactly what it promised.

The crowd of NU students, some bathing suit-clad and buzzed from darties, congregated at the southernmost end of the Lakefill for three hours of live music. When Wop St. Bass Ritual took the stage with a mix of old school funk tunes, the audience rose to their feet for a massive outdoor dance party.

“I feel like it’s more about the vibe and the image you put forward when you’re performing for .WAV,” Galdes said. “If you look up and you see a bunch of people who are like, ‘Yeah, this is dope!’ … They’re going to get up and dance and have a good time, and that does change the way I perform.”

Galdes joked that the music Wop St. Bass Ritual plays is “illegal in the Bienen world.” If he wants to break out of his traditional jazz training to explore funk, soul and dance music, he said he has to do it on his own time.

Wirjawan said he wants .WAV to be a space for students who struggle to set aside time in their busy schedules to do what they love. With an online calendar for weekly shows available on Facebook and an official website on the way, .WAV seeks to streamline the signup process for performers like Galdes, Wirjawan said.

Along with the rest of the executive board, Wirjawan has devoted a tremendous amount of time and effort to making .WAV an accessible and engaging community. He said the past few months have been the busiest stretch of his college life, but he has never felt happier to be at NU.

“When I perform … it just feels so comfortable and so relaxing,” Wirjawan said. “I’m just like, ‘Wow, this is the college experience that I wanted, and these are the type of people I want to surround myself with.’”