The Daily Northwestern • May 9, 2018 • https://dailynorthwestern.com/2018/05/09/sports/womens-golf-brooke-riley-powers-wildcats-to-another-appearance-at-ncaa-nationals/ 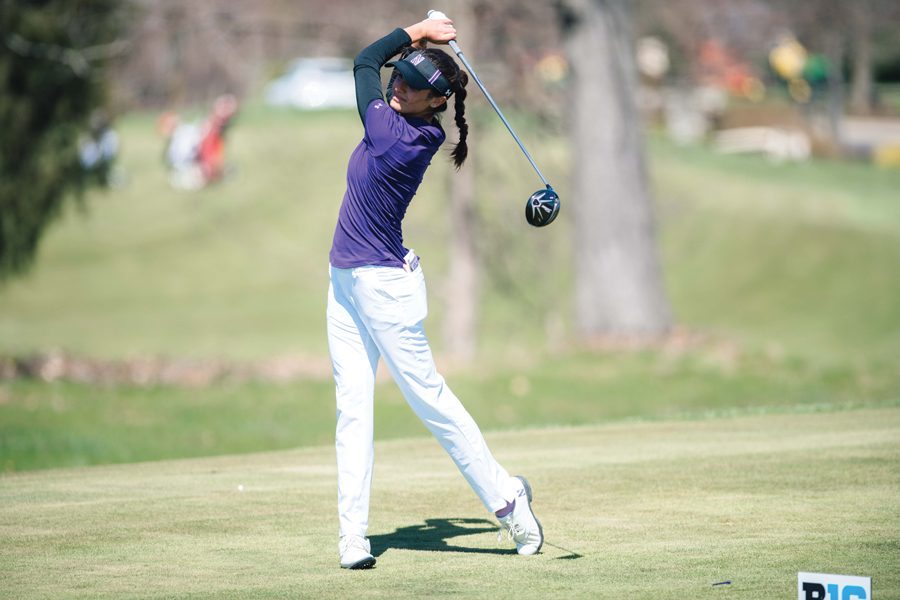 Brooke Riley watches her drive. Riley turned in a 6-under score Wednesday to help Northwestern advance through NCAA Regionals.

It may not be coach Emily Fletcher’s favorite path to success, but yet another spectacular late-round performance this week led Northwestern to its sixth consecutive appearance at the NCAA National Championships.

The Wildcats finished in sixth place in the Wisconsin regional on Wednesday, snagging the last spot among the six teams from the tournament to qualify.

That qualification came on the back of a career performance from sophomore Brooke Riley, who finished tied for fourth in the individual competition at 7-under par, largely powered by a 6-under final round.

“It was a ton of fun,” Riley said. “The first two days I think left quite a bit out there, feeling a little bit disappointed. But today, I really put it all together. … I just found my lines (on the green) and did a better job of trusting them today.”

Riley’s final-round score of 66 was the best round on the course Wednesday in a field with some of the top players in the country, including former individual national champion Virginia Elena Carta and event winner Nicole Schroeder. Riley’s score was tied for the second lowest recorded in any round throughout the tournament.

NU needed nearly all of the eight birdies the sophomore carded, as the Cats were part of a down-to-the-wire race for the final three qualification spots.

Ohio State, Arizona State, Oregon State, Illinois and NU were all within a few strokes of one another throughout the day. Ohio State and Arizona State ultimately tied for fourth, while the Fighting Illini ended the day two strokes back in seventh.

“Today, we did a good job taking it one shot at a time, not getting ahead of ourselves and just going all-in on every shot,” Riley said.

Wednesday was the second straight day during which NU posted the second-best round in the 18-team field. After the Cats struggled in the first round, they found themselves in ninth place heading into Tuesday.

In response, they fired a 4-under second round, led by senior Sarah Cho’s 2-under round. Cho finished second-best among the Cats in the tournament, tied for 17th overall, and sunk a crucial birdie putt as part of a clutch Wednesday stretch run by NU.

“It was really nice,” Cho said. “I didn’t really know how we were standing in regards to the top-six, but any putt counts.”

Cho and Kim have now qualified for the National Championships in all four of the years with the Cats. While this was the closest they came in their college careers to missing the final tournament of the year, Cho said she enjoyed the high-pressure environment.

“It’s pretty exciting, especially after the last two days — it was a little bit nerve-wracking,” Cho said. “That pressure kind of helped all of us grind through and work as hard as possible until the end.”