The Daily Northwestern • May 9, 2018 • https://dailynorthwestern.com/2018/05/09/ae/bienen-alumna-wins-prestigious-metropolitan-opera-national-council-auditions/ 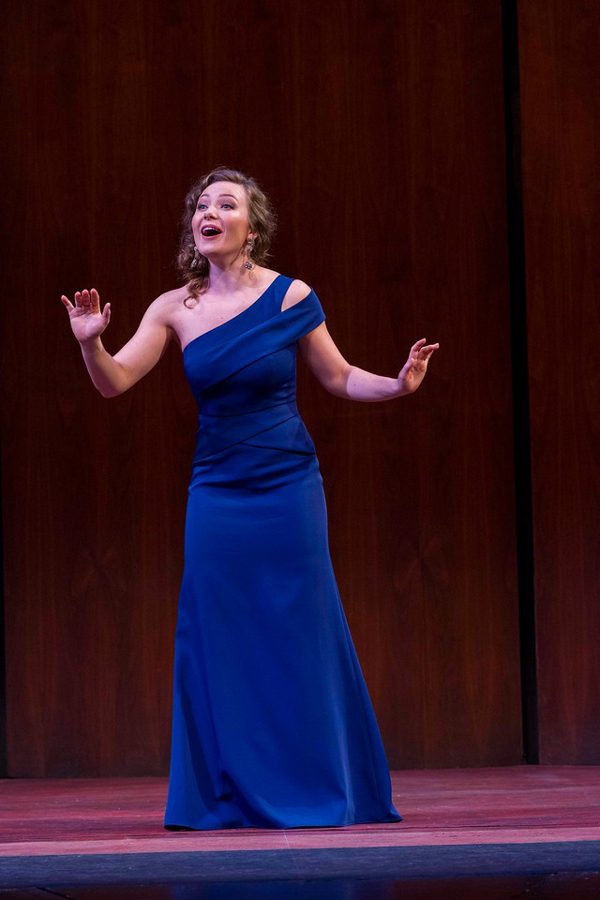 Madison Leonard performs at the Grand Finals concert in New York City. The Bienen alumna was named one of five winners of the Metropolitan Opera National Council Auditions on April 29.

Bienen alumna Madison Leonard is living proof that the third time really is the charm.

On April 29, Leonard (Bienen ’16) was named one of five winners of the Metropolitan Opera National Council Auditions, a competition that seeks to discover “promising young singers” across the nation and assist in their career development, according to its website. It was Leonard’s third time competing in the program.

Leonard said she was stunned when she was declared a winner.

“I could not believe it,” she said. “I was standing just offstage chatting with other people and they called my name … (and) I think my mouth dropped to the floor.”

The competition win comes with a $15,000 cash award — money Leonard said will be used for travel and vocal training expenses.

Brady Walsh, who serves as National Council and artistic administration assistant for the Metropolitan Opera, said more than 1,000 vocalists entered the competition this year. Participants first compete at the district level before advancing to regionals, semifinals and then the Grand Finals concert where the winners are chosen.

Bienen Prof. Karen Brunssen, Leonard’s voice teacher at NU, said the award is “about the highest thing you can attain” as an opera singer, especially in the U.S.

While at NU, Leonard — whom Brunssen described as a “charming and uplifting” person — was already an accomplished vocalist. As a second-year masters student, Leonard took first place at Houston Grand Opera’s Eleanor McCollum Competition and was also accepted into top-tier apprenticeship programs, Brunssen said.

Those experiences, she said, allowed Leonard to learn from some of the best in the industry and hone her craft.

“When you’re singing in that circle of singers that are all so good, it raises your own precedents for how excellent you’re going to be onstage vocally and musically,” she said. “(Leonard) already came with a high-level feeling for all of those things and will just get better and better and better.”

Leonard first competed in the National Council Auditions in 2015 while she was still a student at NU. In 2016, she tried again in Seattle, where she was living after graduation. Both times she advanced to the regional competitions before she was cut.

Reflecting back on her past auditions, Leonard said she has grown and matured as a performer, but also as a person. Opera is an “all-encompassing art form,” she said, and her recent life experiences have made her a stronger, more convincing vocalist.

“I’ve moved several times, traveled, lived on my own,” Leonard said. “I’ve experienced challenges and heartbreak and love, and I think all of that just adds extra paint to this picture I’m presenting.”

This summer, Leonard will make her role debut as Ilia in Mozart’s “Idomeneo” at the Wolf Trap Opera in Virginia. The following fall, she will move with her husband — a fellow opera singer — to Switzerland, where she said she will start auditioning for companies.

While she hopes to find her way back to the Metropolitan Opera stage someday, Leonard said she feels lucky to have found success in the “highly competitive yet highly rewarding” world of opera.

For now, she’ll just continue doing what she loves.

“For me, success isn’t going to be defined by where I’m singing,” Leonard said. “If I’m making great music and I’m being true to my artistry and I’m happy doing it, then that’s going to be success for me.”