The Daily Northwestern • May 7, 2018 • https://dailynorthwestern.com/2018/05/07/lateststories/als-deli-from-american-delicatessen-to-french-inspired-mainstay/ 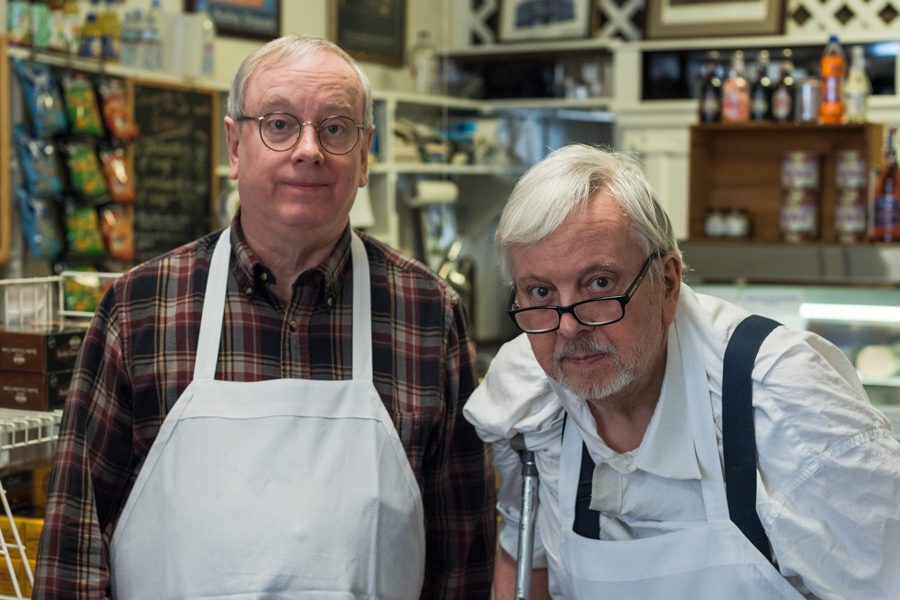 It all started with the red balloon.

Bob Pottinger, co-owner of Al’s Deli at 914 Noyes St., was then just an 8-year-old boy with polio at the movies with his father. The short film in question was Albert Lamorisse’s “Le Ballon Rouge,” which details the story of a young Parisian boy and the titular red balloon.

The shots of Paris, Bob said, had him “enamored,” transforming the North Shore native into a “total Francophile.” When he and his brother John Pottinger took over their father’s deli full-time in 1992, the duo transformed the restaurant — once a steadfastly American institution, offering sandwiches like bologna and hard salami on white Wonder Bread — into a more international affair.

Though the brothers had started introducing French items to the menu in 1979 with the addition of bearnaise sauce (a creamy dressing made with white wine vinegar), it wasn’t until the pair assumed control that they decided to ramp up the restaurant’s Frenchness.

Since then, Bob, who cooks, and John, who handles the business side, have tweaked the Evanston staple to become a fan favorite of Chicagoland residents without forgetting its founding principles.

Al Pottinger, the shop’s namesake, founded the deli in 1949. During World War II, Al served in the Navy as chief gunner and chief cook on a small ship. After the war ended in 1945, he returned stateside and went on to work for Kroger, a national grocery store chain, but grew dissatisfied with his lack of autonomy in the role.

“He was iconoclastic, to say the least,” Bob said. “He did not do well with authority, and he did not like having a boss.”

So, when the space on Noyes Street became available, Al jumped on the opportunity and opened shop. The delicatessen’s niche, Bob said, was to serve “higher quality food than anybody else” while still maintaining affordable prices.

The shop did well in its early years, John said, serving a growing clientele of Northwestern students, faculty and staff, as well as North Shore residents. Al, however, grew frustrated at Evanston’s “blue laws,” which prohibited businesses from operating on Sundays, and became one of the few restaurant owners in the city to “thumb their nose” at the rule.

“My father said, ‘To hell with that’ and opened on Sundays anyway,” John said. “He was one of the first, so there were always huge mobs of people on Sundays.”

Bob and John started working full-time at the deli in the 1970s. Bob said he was originally asked to stay on for two weeks as his father recovered from cataract surgery.

Home is where the bread is

Kate Bernot (Medill ’10) worked at Al’s from her sophomore year at NU until after her graduation. There, she said she found not just a job, but a home.

She said getting to that point, however, was happenstance. Bernot had just moved off-campus, and her parents urged her to get a job to help pay the rent. One day, when walking down Noyes, she saw Al’s hand-drawn “Help Wanted” sign, applied on a whim and got the job.

Bernot said she was treated well and was always given food to take home at the end of the day (her favorites: soupe au pistou and turkey, aioli and Swiss on rosemary olive bread).

Besides an “abiding love of bread,” Bernot said the Pottinger brothers taught her important life lessons like the value of integrity.

“They always just stayed true to what they thought was best and … they definitely had a vision and principles on which they were going to run this deli,” Bernot said. “Even if you think you could make more money, if you don’t think it’s the best move for your business or your work, you don’t do it.”

Bernot said that though the shop is a bit old-fashioned, with hand-written order forms and food that takes a bit longer to prepare, it’s this personalization and attention to detail that drives so many customers back to the deli week after week.

And, because of this, she said she noticed a “little club of regulars” who kept showing up, including people who would travel from Chicago or other North Shore suburbs just to take a bite out of the deli’s turkey club. When Bernot herself was working in Chicago after graduation, she said she would “sit forever” on the Purple Line just to drop by — and maybe snag a butter cookie.

“Al’s was so much more to me than just a deli, and I think that’s true for a lot of the other customers,” Bernot said. “There was this whole community of people that was built around this deli but who shared a lot more and got to really know each other through that place.”

A taste of Paris

Today, Al’s walls are lined with photographs of Parisian bridges and faux street signs saying “Rue Noyes.” The music, vaguely “Ratatouille”-esque, hums quietly in the background, and the smell of fresh baguettes wafts over the polished marble tables.

The menu proudly reads “We accept Euros,” which Bob said helps give the pair pocket change for when they visit France. Bob’s been 32 times, with his 33rd trip booked for September.

The main event, however, is not the decor — it’s the food, which John said still adheres to Al’s founding belief in quality over convenience.

Soup is made from scratch, and bread is delivered fresh every morning from Hewn Bakery, another Evanston mainstay. In recent years, John said customers’ tastes have changed from fattier meats like salami and bologna to leaner cuts like smoked turkey, and the menu has followed suit.

John said the fact that he and Bob independently own and operate the shop means they’re free to try out new items or modify existing ones, depending on their own opinions or customer requests.

And though Bob said running the shop can be tiring, it’s the customers — both regulars and newcomers — who keep drawing him back.

“When we get filled up and all the tables are full, I look out and say, ‘Those people are enjoying themselves,’” Bob said. “It gives me a lot of satisfaction to say, ‘I did that.’”