The Daily Northwestern • May 6, 2018 • https://dailynorthwestern.com/2018/05/06/campus/nu-black-alumni-association-premieres-documentary-on-bursars-office-takeover/ 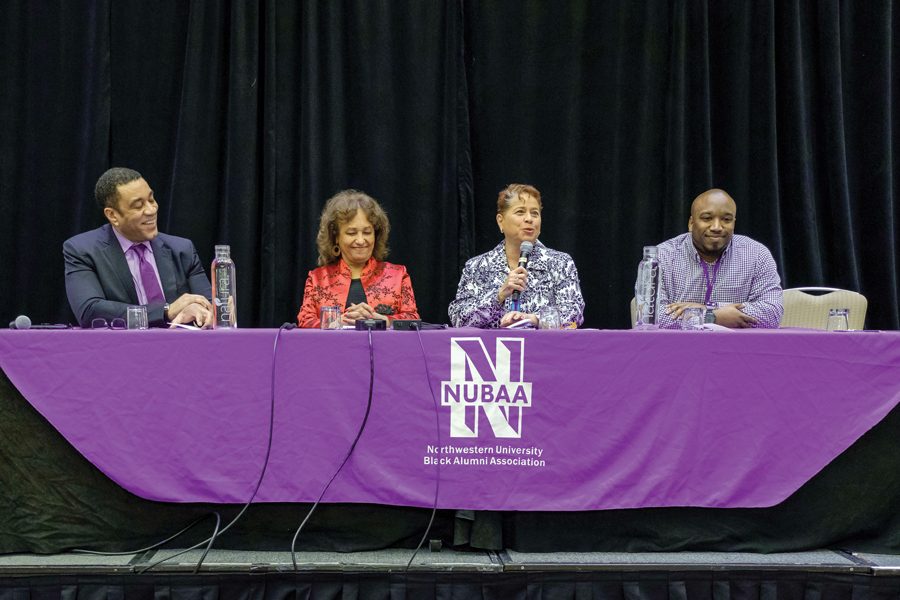 Alumni Harry Lennix, Daphne Maxwell Reid and Joanne Williams join filmmaker Eric Seals (left to right) during a panel after the premiere of a NUBAA-commissioned documentary on the Bursar’s Office Takeover. Takeover participants Maxwell Reid and Williams reflected on their time at Northwestern and its evolution since 1968.

CHICAGO — Black students’ transitions to Northwestern in the late 1960s, their experiences on campus and the context of the national civil rights movement were highlighted in a full-length documentary on the Bursar’s Office Takeover commissioned by the Northwestern University Black Alumni Association.

The film premiered Saturday at the Swissôtel and was created in partnership with Digital Café — a Chicago-based digital media production company — to provide a platform for alumni to tell their stories, executive producer and NUBAA president Jeffrey Sterling (Weinberg ’85) said.

“The Takeover: The Revolution of the Black Experience at Northwestern University” features interviews with a number of takeover participants, University officials, staff and even current students. In the documentary, Clovis Semmes (Weinberg ’71, Graduate School ’78), a student who was involved with the takeover in 1968, addressed the sense of urgency he and other students felt to make themselves heard by the University.

Involving a black-owned business in the film, Seals said, created an environment in which alumni could be more comfortable recounting their experiences on campus “because the people who were behind-the-scenes looked like them too.”

For current students, knowing the history of previous students’ successes and struggles is essential, he said.

“(Students) need to know what people who look like them went through 50 years ago,” Seals said. “The best way to get forward is to learn what happened before you got to Northwestern and then build from the generation before you so you can take those next steps.”

Throughout portions of the documentary showing, alumni teared up reliving their memories.

Maxwell Reid was Northwestern’s first black Homecoming queen, and scenes in the film tackled the oftentimes negative reactions she received from University officials and other non-black students. Due to her experiences on campus, she said that for a while, she couldn’t even “listen to the word ‘Northwestern’ … without getting mad.”

Although she didn’t know specifics of the plan to take over the Bursar’s Office long before it happened, Maxwell Reid said black students’ collective determination to take action and improve the climate at NU was evident.

“It was an accumulation of all the personal things that every one of us went through when we got to Northwestern combined with the energy generated by the loss of Dr. King, by the frustrations of not being able to be heard by the University — it all culminated,” she said.

While alumni primarily attended the weekend premiere, the film will also be shown on the Evanston campus later this month.

Sterling told The Daily he hopes students and members will engage with it, but the documentary is solely a “bookend” in NUBAA’s drive to allow Bursar’s Office Takeover participants to reclaim the stories and tell their first-person accounts.

“This is us re-capturing our history, and telling our stories in a way that provides balance to whatever misconceptions may exist about any part of the Takeover,” he said.