The Daily Northwestern • May 3, 2018 • https://dailynorthwestern.com/2018/05/03/lateststories/lacrosse-starting-goalkeeper-unclear-as-northwestern-heads-to-big-ten-tournament/ 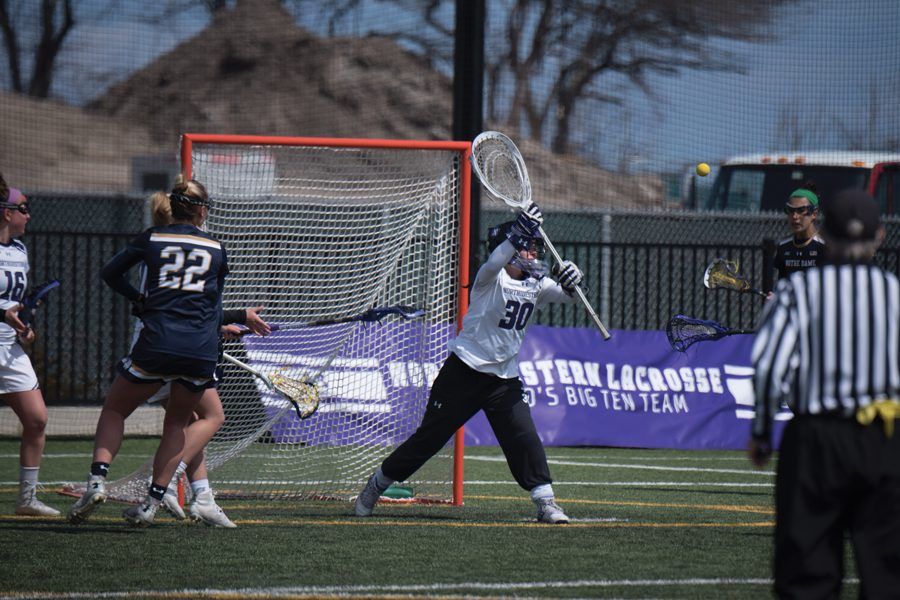 Julie Krupnick makes a pass from the goal. The redshirt freshman goalkeeper has started all 17 games this season, but was benched during last week’s game at Maryland.

Early in the second half of last week’s game at Maryland, Northwestern was in a bind.

The No. 7 Wildcats trailed the No. 3 Terrapins by 8 goals. Redshirt freshman goalkeeper Julie Krupnick had been tagged for 15 goals on 20 shots, resulting in her worst single-game save percentage since seizing the starting job from junior incumbent Mallory Weisse at the start of the season.

Coach Kelly Amonte Hiller decided to make a move: For the first time in a non-blowout game this season, she put Weisse in for Krupnick.

“We were just trying to get a little bit of a spark,” the coach said. “We didn’t have our best game defensively and I don’t think Julie had her best game, and we have a lot of confidence in Mallory … and she did a phenomenal job.”

Entering this weekend’s high-stakes Big Ten Tournament — in Friday’s semifinal, NU (13-4, 5-1 Big Ten) will face No. 16 Penn State (9-8, 3-3) for a chance to rematch either Maryland or Johns Hopkins in Sunday’s championship game — the goalkeeper situation has been thrust into some cloudiness.

Although Krupnick has started all 17 games for the Cats in 2018, Amonte Hiller declined to name a starter for Friday’s contest.

“For right now, we’re still assessing it and going to make our decision when game time comes,” Amonte Hiller said. “It’s been a great dynamic, they’re very supportive of each other and I think they’re both ready.”

After missing all of the 2017 season with an injury, designated as a redshirt season, Krupnick’s return to health last fall created the goalkeeper competition. She said she and Weisse pushed each other throughout the offseason in a “neck-and-neck” position battle before earning the job.

Krupnick’s save percentage remains an impressive .471 on the season, well above Weisse’s marks of .419 and .432 during her prior two seasons as starter.

“We’ve pushed each other all week, it’s been a great week of preparation, so we’re excited for this weekend,” Krupnick said.

In last year’s tournament, NU faced the exact same semifinal matchup and prevailed 12-11, with now-sophomore midfielder Megan Kinna scoring the winner with 59 seconds left to avenge a regular-season loss against the Nittany Lions.

Junior attacker Selena Lasota, like Krupnick, was forced to watch that thriller from the sidelines as she recovered from a season-ending injury. Lasota said she’s “so thankful” she’ll be able to put her stamp on this year’s tournament, held in Ann Arbor, Michigan.

She certainly made an impact when the Cats and Penn State met last month in Pennsylvania, registering 2 goals and two assists on a team-high nine shots to help NU win 17-13. When watching film this week, Lasota said, the team identified turnovers and pace of ball movement as two key things they struggled with in the first contest and must improve in Friday’s rematch.

A victory Friday would essentially ensure NU would host first- and second-round games during the upcoming NCAA Tournament and, in all likelihood, set up a Big Ten championship game between the Cats and Terrapins for a third consecutive year.

But for now, the team’s focus rests squarely on the Nittany Lions.

“We need to do what we do well offensively — moving the ball, sharing the ball, finishing our shots and really making sure we come up with draw controls,” Amonte Hiller said. “That’s going to be a key factor.”