The Daily Northwestern • May 3, 2018 • https://dailynorthwestern.com/2018/05/03/campus/black-alumni-university-officials-gather-for-symbolic-groundbreaking-ceremony-at-black-house/ 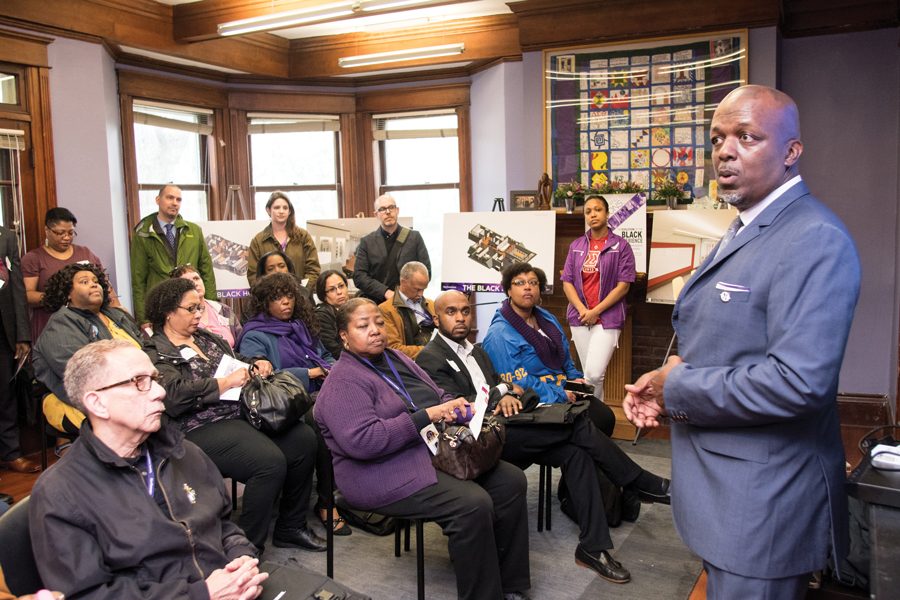 Jeffrey Sterling, president of the NU Black Alumni Association, speaks at the Black House. Students, alumni and University officials gathered Thursday for a symbolic groundbreaking ceremony on the 50th anniversary of the Bursar’s Office Takeover.

University officials, students and alumni gathered Thursday at the Black House for a symbolic groundbreaking ceremony on the 50th anniversary of the Bursar’s Office Takeover, though the construction phase of the building’s renovation won’t begin immediately.

“Everybody remembers the events of 2015 and the University responding quite favorably to improve the conditions of the Black House,” Jeffrey Sterling (Weinberg ’85), president of the NU Black Alumni Association, said moments before digging a shovel into the ground. “Symbolically and practically, we’re about to engage in a major renovation that has taken a lot of people to put input into.”

The renovation process began about two years ago, after students criticized the University’s plans to move administrative offices into the Black House and the Multicultural Center, as the changes would have reduced the space available for students. Administrators held listening sessions, and a committee charged with facilitating the process gathered feedback and conducted a feasibility study, said Lesley-Ann Brown-Henderson, executive director of Campus Inclusion and Community and co-chair of the renovation committee.

Brown-Henderson said the committee is now in the schematic design process, in which tentative plans are presented to students and alumni to gather more feedback.

The ceremony was just one piece of this week’s events, organized by NUBAA to commemorate students who took over the Bursar’s Office in 1968. Those students, many of whom were in attendance for the day’s events, were protesting the University’s inadequate response to the demands of black students.

After 38 hours, students and administrators came to an agreement that included a provision saying the University would create a space that black students could call their own.

On Thursday, Sterling stood outside the Black House alongside Kimya Moyo (SESP ’69), For Members Only coordinator Kasey Brown, chief diversity officer Jabbar Bennett, Provost Jonathan Holloway and University President Morton Schapiro. Alumni and other ceremony attendees then followed Sterling inside for a presentation about the upcoming renovations.

Sterling also presented a plaque donated by NUBAA that listed the names of those who participated in the 1968 demonstration. He said the piece is meant to honor the participants’ “courage, commitment and vision.”

“I’m about to cry, so I’m not going to say too much, but I know God has blessed us this day for being able to take this house, our home, back again,” said Alice Palmer, former director of the department of African American Student Affairs.

Standing inside the Black House, Palmer noted that the building has hosted poets, singers and many others who lent credibility to the work and activism of the students who took over the Bursar’s Office in 1968.

“I cannot tell you how seriously we took what you did and what we intended and what we hoped we carried out during the years that you were here to maintain what you gave us,” Palmer said.

Brown-Henderson told The Daily in April that she anticipates that the Black House construction will begin “in the near future.” The design still has to be approved by the Board of Trustees, which will meet in June. Once the University receives the necessary all-clear, administrators will put together a construction timeline, she said.

“For me this is a really, really important project,” she said Thursday. “This hits me right at my core, and I take a lot responsibility in serving as one of the two leaders leading our university in thinking about how we honor the legacy of the Black House as well as how does it serve the students who came before, the students who are currently here and the students who we will serve in the future.”