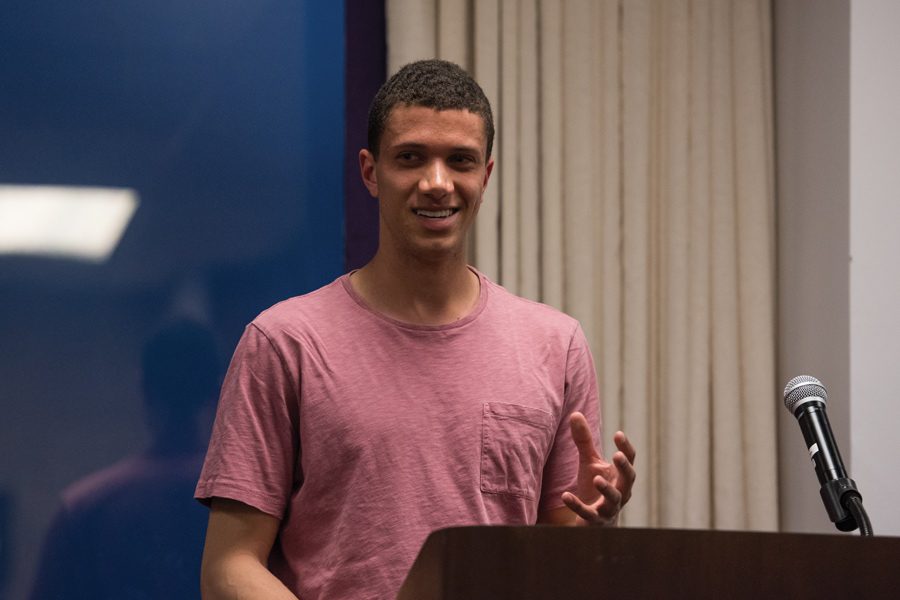 Tyler Washington speaks during ASG Senate. The Weinberg junior was one of nine vice presidents confirmed at Wednesday’s meeting.

Associated Student Government Senate unanimously confirmed the nominations of nine vice presidents to its executive board Wednesday in what chief of staff Lars Benson said was the most competitive application process in institutional memory.

Weinberg junior Agneska Bloch Skyped in from abroad to answer questions from senators regarding her application to be vice president for academics. ASG President Sky Patterson, who formerly held the position, said Bloch remained engaged with the committee even while abroad. Bloch said she hopes to expand Patterson’s legacy by advocating for the Books for Cats program to administrators.

Weinberg junior Tyler Washington was confirmed as vice president for accessibility and inclusion. His biggest goal, he said, would be to expand the work-study program.

Katherine Conte, a Weinberg freshman, was confirmed as vice president for analytics. She said the analytics committee has traditionally been isolated from the rest of ASG, and she hopes that under her leadership it can be a “bridge” between committees and help them collect data.

“All parts of our life here at Northwestern can be tracked with statistics,” Conte said. “We love stats, the administration loves stats.”

McCormick freshman Spencer Colton was confirmed as vice president for services. Colton served on the services committee this year and said he has been revamping ASG’s website.

“We could really use technology to our benefit to make ASG a more efficiently-run organization and one that’s more transparent to our students,” Colton said.

ASG also amended a resolution introduced last week to change the code for parliamentarian impeachment procedure. The amendment — written by Zuniga and passed unanimously — changed the definition of the judicial pro tempore, who would lead impeachment proceedings in the event that a parliamentarian would be impeached. With the amendment, the position will be elected by the Rules Committee rather than automatically designated as the most senior member.