The Daily Northwestern • May 1, 2018 • https://dailynorthwestern.com/2018/05/01/lateststories/womens-center-director-discusses-first-generation-working-class-identity-at-ses-event/ 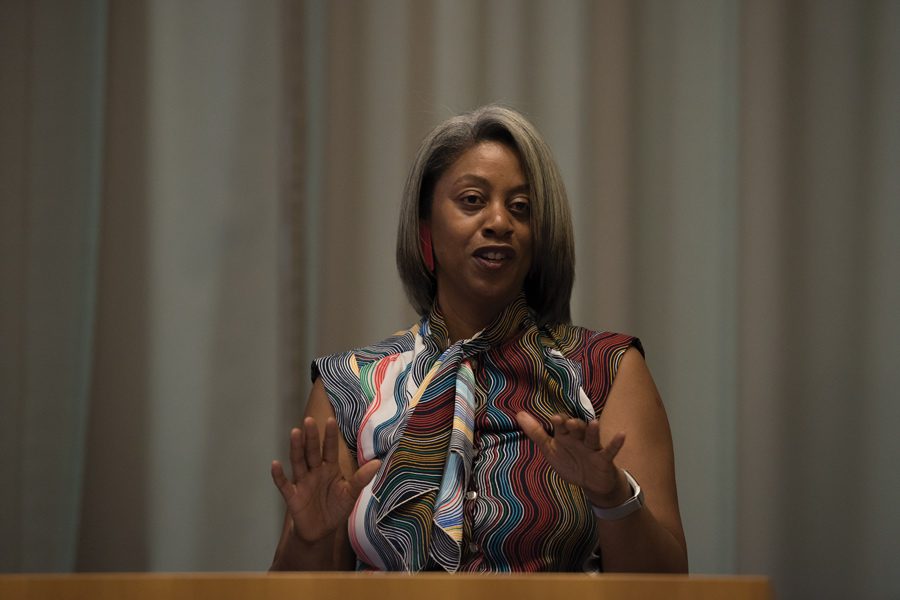 SES director Kourtney Cockrell said Nzinga-Johnson’s speech related to the themes of both Money Matters Week and “I’m First,” which launched last week. She added that the “I’m First” campaign will be an ongoing effort to celebrate the strengths of first-generation students and what they bring to NU.

“We bring things like our ambition, our resilience, our resourcefulness and so much more,” Cockrell said. “All the talents that we’re bringing are really what ‘I’m First’ is about — bringing those to the forefront and raising awareness that we are here and that collectively we are making Northwestern a more inclusive space.”

Nzinga-Johnson, who began working at NU in September, noted some of the unique challenges of being a first-generation or low-income student, such as having to become independent very quickly or feeling a greater pressure to succeed than non-first-generation students might.

However, she also echoed Cockrell’s statements in celebrating the unique strengths of first-generation students.

“I carry the strengths of my working-class resourcefulness and determination,” Nzinga-Johnson said. “We are traversing this terrain with no road map, but we have long histories of success and we can only shine brighter when armed with appropriate resources and support.”

Those resources and support, Nzinga-Johnson said, could include professors making sure class books are on reserve in the library, which she did when she was a professor because of her own experiences of not being able to afford textbooks in college.

She added that promoting other available resources, such as health care or food pantries, in syllabi allows students to access information without having to identify themselves as low-income.

“Don’t make working-class students have to out ourselves,” Nzinga-Johnson said. “Why should we have to expose our pain for you to provide services?”

Weinberg sophomore Sayeed Sanchez told The Daily he agreed with Nzinga-Johnson’s point about professors providing more resources to students, noting that he has had to drop a class before because the required materials were too expensive.

Sanchez, who will be the featured student in SES’s “First Gen Friday” social media campaign this week, added that professors and non-first-generation students should be more aware of the challenges first-generation or low-income students face, and the difficulty some students have in reaching out for help.

“There are a lot of structural issues,” Sanchez said. “Sometimes you can’t overcome it through independence and you have to ask for help and that’s OK. I don’t necessarily know how to do that, so I think having professors who are aware of the issues and make a more inclusive environment and let you know what resources are available can really make a difference.”