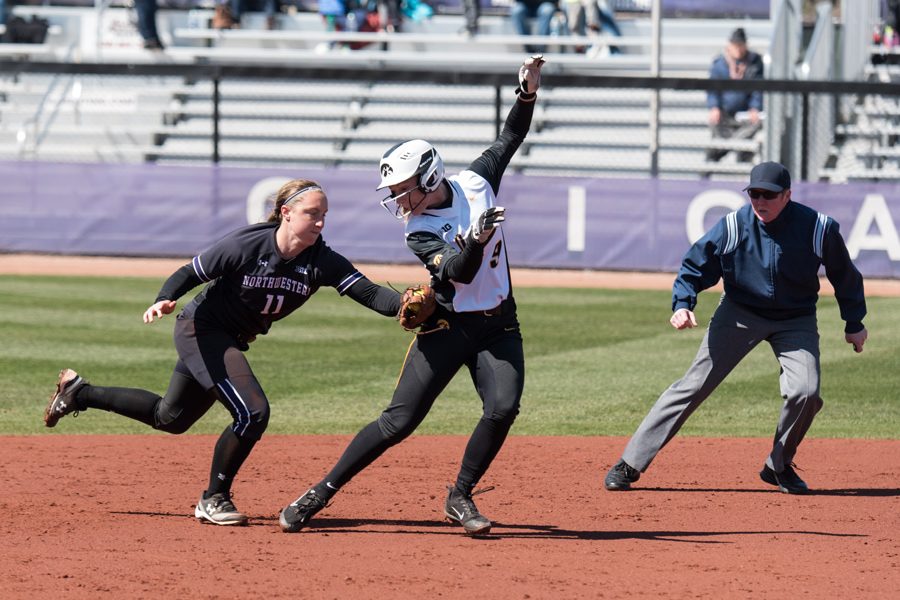 After splitting the first two games of the series with a 4-1 win Friday and 3-0 loss Saturday, the Wildcats (32-14, 13-6 Big Ten) relied on 13 hits and a stellar pitching performance from freshman Kenna Wilkey to lead NU to the series win.

The Cats knew they were going to have to produce runs against the Hawkeyes (20-28, 6-13), who are ranked third in the Big Ten with a 2.25 team ERA. In their first two games, the Cats combined for just eight hits before breaking through on Sunday.

Coach Kate Drohan said the team’s approach at the plate changed going into the rubber match.

“(Allison) Doocy, the pitcher yesterday, she had great command, she had great spin, and she was definitely in her rhythm,” Drohan said. “We were just like, ‘We’re going to take charge of the batter’s box today,’ so I think we did a better job at that, for sure.”

On the mound, Wilkey pitched with the poise of a senior. Aside from a 2-run home run, Wilkey gave up just two hits and Iowa’s first hit didn’t come until there was one out in the fourth inning.

“Especially after losing game two yesterday, she really took it upon herself to do everything in her power to make sure that it wouldn’t happen again,” Nettling said.

NU has won every Big Ten series at home this season, including victories against Minnesota, Ohio State and Nebraska.

Nettling said one of her favorite memories was that series win over the Buckeyes, while Rabin said she just enjoyed being able to wear her uniform and hear her name called in front of the announced crowd of 511 on Sunday.

Both players said it hasn’t set in yet that it was their final regular season game at Drysdale Field — commonly called “the J” among the team.

“(I) love playing at ‘the J,’” Nettling said. “It probably won’t hit me until we come back in the fall and see the younger girls out here. A ton of memories on this field; it was a really fun four years.”

Nettling has started 171 games over her four-year career, hitting 10 home runs and 98 RBIs. Once she became a starter as a junior, Panko had a huge presence in the batter’s box, hitting .321 with 46 RBIs and 28 stolen bases over that time span.

However, the most accomplished senior is Rabin, who currently has 128 stolen bases and 200 runs scored in her career — third and sixth in Big Ten history, respectively.

Drohan said what she will miss the most about the senior class is their work ethic and love for the school.

“They just love Northwestern,” Drohan said. “I mean they love it. All parts of it. They’ve embraced it since day one and that has been very contagious. It’s been contagious with recruiting, contagious with our younger players, it’s been inspiring to me.”