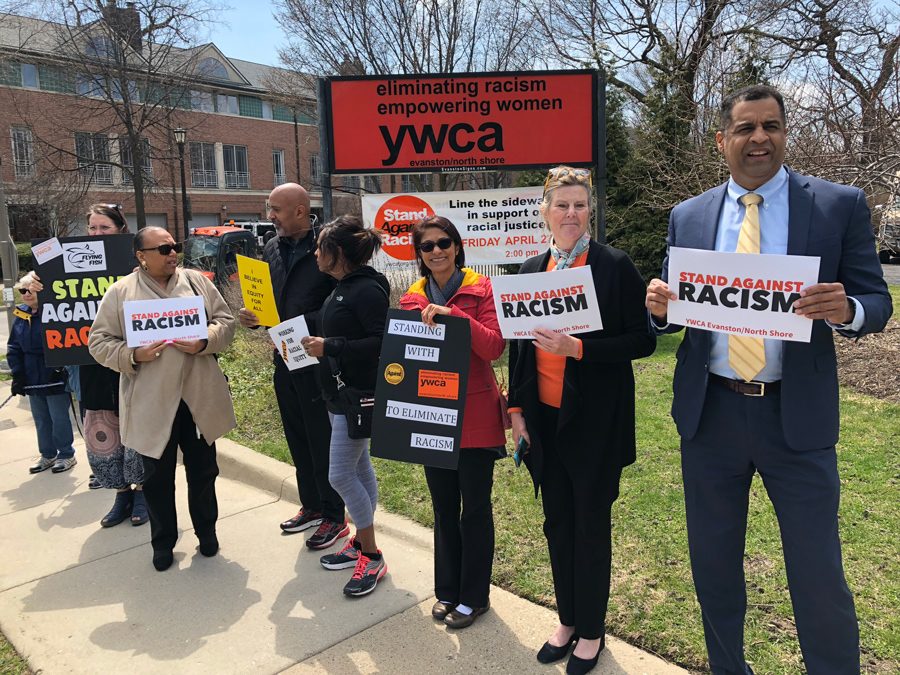 Community members stand on the corner of Ridge Avenue and Church Street at the Evanston/North Shore YWCA. They joined more than 10,000 people on the North Shore to participate in the YWCA’s annual Stand Against Racism event.

A chorus of car horns blared down Ridge Avenue on Friday afternoon as drivers showed their support for community members lining the road holding signs that read “speak out against racism.”

An estimated 10,000 people on the North Shore took to the streets Friday to show their support for ending racism at the YWCA’s national Stand Against Racism event. Stand Against Racism is an annual YWCA movement that aims to raise awareness of the effects racism can have on communities and is a part of the YWCA’s effort to encourage schools, businesses, faith groups and civic groups to use the month of April to discuss race and equity.

“We’ve seen very clearly over the last few years, the ugliness of racism,” Heineman said. “It’s not just the individual racism, but we’re seeing how systemically it has not been addressed.”

Although people were spread throughout the city in different groups, supporters all read the “Stand Against Racism Pledge” in unison at 2:15 p.m. The pledge asks that participants be “mindful of all forms of bias, prejudice and discrimination” and “identify and eliminate any use of expressions of racism or racial stereotypes.”

Evanston/North Shore YWCA chief operating officer Kristen White said while Friday’s event was only 25 minutes long, it was one of the largest national days of action aiming to raise awareness of racism and bigotry.

White said the event created an opportunity to engage the community in a dialogue about ending racism.

“This is a really simple way for people to come out together, share their voices and be a part of a larger community that feels strongly about the issue,” she said.

Joan Clay, a staff attorney at the Moran Center for Youth Advocacy, said she participated in the YWCA movement because she’s worked through the Moran Center — which is based in Evanston — to address the needs of the community by providing legal and social services.

Clay said the center is there to protect residents’ rights and “help everyone in reaching that goal of being the best person they can be.”

“As we know in our country race is a very hot topic, racism is a very big issue,” Clay said. “We just want people to understand that we’re all committed to making sure that we live in — and our children and the other people in the future generations live in — a world where they are free to be who they are and not be judged based on their race.”