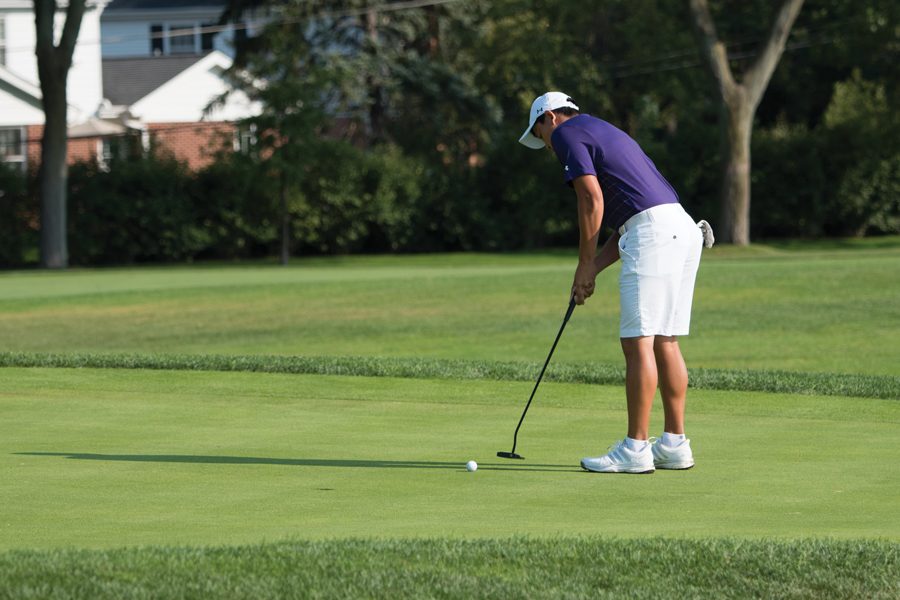 Dylan Wu hits a putt. The senior is one of two Wildcats golfers who will play in their final Big Ten Championships this weekend.

Northwestern is looking for revenge.

Last season, the Wildcats came into Big Ten Championships hoping to upset Illinois. But a rough first round ended those plans prematurely, and NU had to settle for second.

This time, the Cats will need a strong first round to stay in contention with the No. 13 Fighting Illini, the only ranked team in the Big Ten, as the postseason begins this weekend at Big Ten Championships. The tournament will feature 54 holes over three days. Coach David Inglis said he was encouraged by his team’s performance in 2017.

“We just put ourselves behind the 8-ball the first day, we got too many strokes behind Illinois and they walked away with it,” he said. “For us, it was encouraging to have the low score the last two days, and probably tomorrow it’ll be important to see if we can get off to a good start.”

NU is coming off an impressive performance at the Boilermaker Invitational. Though the final round of the tournament was canceled due to weather, the Cats tied for the win alongside No. 25 Kent State.

“Everybody loves the course and just the tournament in general, so we’re all looking forward to getting going tomorrow and seeing how well we can compete this week,” he said.

NU’s toughest competitor will likely be Illinois, which is led by reigning Big Ten player of the year Dylan Meyer. The weather could also be a factor, with rain forecasted Friday, but Inglis said it won’t affect the Cats’ mindset.

“There’s no change to the fact that lowest score wins,” he said. “Whether that score is under par or over par, it really doesn’t matter. You’re just trying to do the best you can in the moment on every hole and add them up at the end.”

NU has won three tournaments this season, including the Boilermaker this spring and two wins in the fall. The Cats will feature a starting lineup of Wu, Triplett, Lumsden, Hawkins and junior Pete Griffith.

This will be NU’s final tournament of the season before NCAA regionals — which will begin May 14 — and the final conference tournament for Wu and Triplett.

Wu said NU is going into the tournament expecting to win.