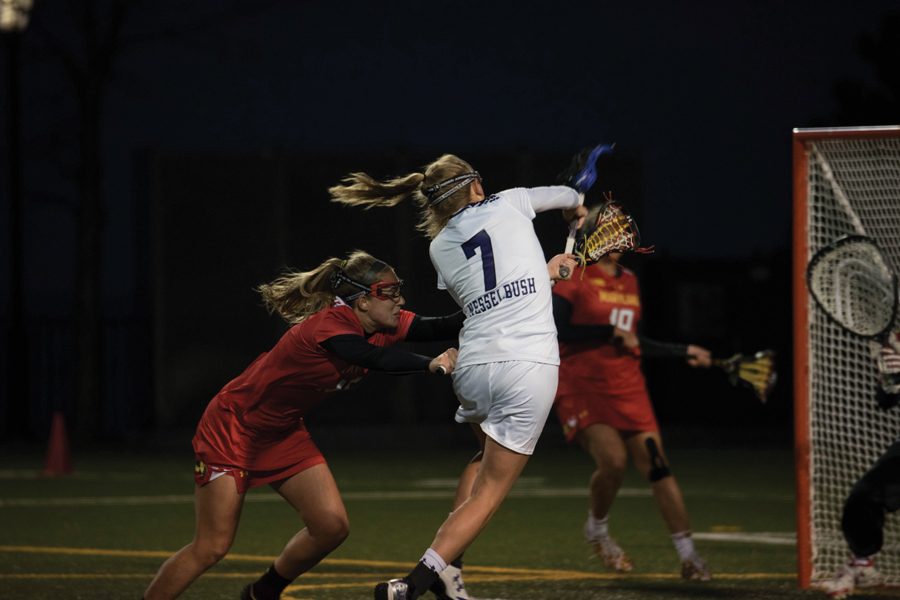 Sheila Nesselbush takes a shot during a 2017 game against Maryland. Nesselbush scored three goals but it wasn’t enough for the Wildcats to upset the Terrapins on the road Thursday.

Northwestern, throughout recent years a punching bag for the Maryland powerhouse, was finally playing like a team that could compete with — and potentially beat — the three-time reigning Big Ten champions.

The No. 7 Wildcats had worked through the nerves that put them in a disastrous 6-1 hole early in College Park. They had overcome a 14-7 halftime deficit and another goal conceded mere seconds into the second half to regain their footing. They had ripped off 4 consecutive goals to pull within 15-11 and had all the momentum on their side with plenty of time remaining.

Where did it go wrong?

A controversial call against junior attacker Selena Lasota with 22 minutes left certainly seemed to somewhat deflate the Cats’ rally. Lasota, seeking her third goal of the game but playing on a yellow card, turned toward the goal with a grade-“A” scoring chance, but was instead promptly ejected after a referee ruled she made contact with a Maryland defender’s head with her stick.

“It didn’t seem like she hit her in the head, it seemed like the girl just ducked and the ref went with the acting piece, but it could go either way,” a frustrated coach Kelly Amonte Hiller said afterward. “Selena took a chance, and at least she put herself out there.”

The coach traced the crux of NU’s woes, however, to their slow start, saying she felt the team spent “the whole entire game” fighting that deficit. Maryland took the first 10 shots of the game and scored the first 4 goals.

The Cats adjusted by switching to a new draw control taker — from senior and longtime stalwart Shelby Fredericks to freshman Brennan Dwyer — and a new goalkeeper. When redshirt freshman goalkeeper Julie Krupnick allowed 15 goals on 20 shots on goal, Amonte Hiller turned to her 2017 starter, now-junior Mallory Weisse, shortly after the break.

Weisse validated her coach’s decision by making 12 saves on 17 shots, including a number of point-blank net stops that jumpstarted NU’s brief comeback. She credited the defense, which was exploited in the first half by a Terrapins team clearly seeking to spread out coverage and attack defenders one-on-one, for stiffening as the game went on and making her job easier.

Senior midfielder Sheila Nesselbush and sophomore midfielders Megan Kinna and Lindsey McKone tied for the Cats’ scoring lead with 3 goals each, yet the end result was another addition to a losing streak against the Terrapins that dates back to 2012. The hosts’ 20 goals were also the most the Cats have allowed since 2013.

But Nesselbush said that during the course of Thursday’s game, the team developed the belief that they can “outperform” the Terrapins, and they may soon have the chance to back up that realization — without the burden of a sluggish start. The two teams could easily meet again in the finals of the upcoming four-team Big Ten Tournament, when the Cats won’t have to deal with a hostile crowd or the Maryland stadium’s field hockey-style turf.

“Every person on our team is more athletic and better, in our opinion, than their matchup, so we just started playing with that confidence and backing each other up a little more … and obviously things were a little more successful,” Nesselbush said. “Heading into next weekend, that’s something we need to remember.”