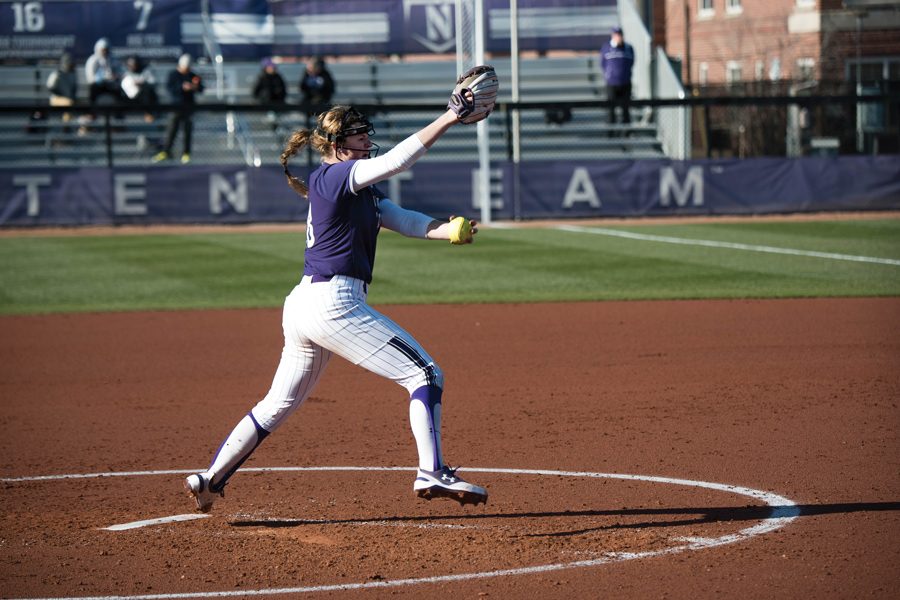 It was no secret that Morgan Newport had been struggling.

Since the start of Big Ten play, the sophomore pitcher had seen her ERA rise from 2.25 to 3.96 entering Wednesday’s nonconference matchup with Loyola. Freshman Kenna Wilkey has carried Northwestern’s pitching staff lately, so the team has been able to stay hot, but the Wildcats have been conscious of overworking Wilkey’s young arm.

Newport got herself back on track and gave NU (30-13, 11-5 Big Ten) a chance to rest its other pitchers Wednesday, throwing a complete game in which she allowed only three hits and one unearned run. She struck out seven and walked just one as the Cats won their eighth straight game with a 4-1 victory over the Ramblers (21-23).

“I felt really good, to take some pressure off Kenna, who’s been working so hard in the circle for us,” Newport said. “I was just trying to pound the zone and trust my defense behind me.”

Newport retired the first nine batters she faced and struck out the side in the third, and NU tallied a run in each of the first three innings to give Newport a comfortable lead to work with. Senior center fielder Sabrina Rabin led off the first with a walk, stole second, went to third on a groundout by freshman second baseman Rachel Lewis and scored on a sacrifice fly by junior left fielder Morgan Nelson.

The Cats doubled their lead in the second. Senior shortstop Marissa Panko led off with a single and stole second. She stole third as well and scored when the throw got past the third baseman. Lewis gave NU a third run an inning later with a home run to left-center, her 16th long ball of the year.

“We’re all just trying to adjust. We hadn’t seen slow pitching in a while,” Lewis said. “We need to realize that we need to put in the effort, and that will push us to score more runs.”

Newport had a brief hiccup in the fourth, allowing a leadoff double and eventually an unearned run on a throwing error by freshman third baseman Mac Dunlap. But she limited the damage from there, getting out of the inning on a strikeout and a weak grounder.

NU added an important insurance run in the sixth when Rabin led off with a triple and scored on a single by Lewis, giving the Cats their 3-run lead back and accounting for the final margin of victory.

“I felt like we were patient at the wrong time and aggressive at the wrong time,” coach Kate Drohan said. “We’ll make that adjustment. We’ll understand the feel for that. But we had some big hits when we really needed it, and putting that last run up there in the sixth was a big key for us.”

The Cats’ defense gave Newport a big lift in the fifth. Following a one-out single, senior right fielder Brooke Marquez caught a line drive and doubled off the Loyola baserunner to end the inning.

Newport then worked around a two-out double in the sixth inning before working a perfect seventh to complete the win, ending the game emphatically with a strikeout. She threw just 92 pitches in her effort.

“(Newport) was outstanding, especially with the way she took charge of the strike zone,” Drohan said. “That was a sharp day for her today. That just gives her confidence going into the weekend.”