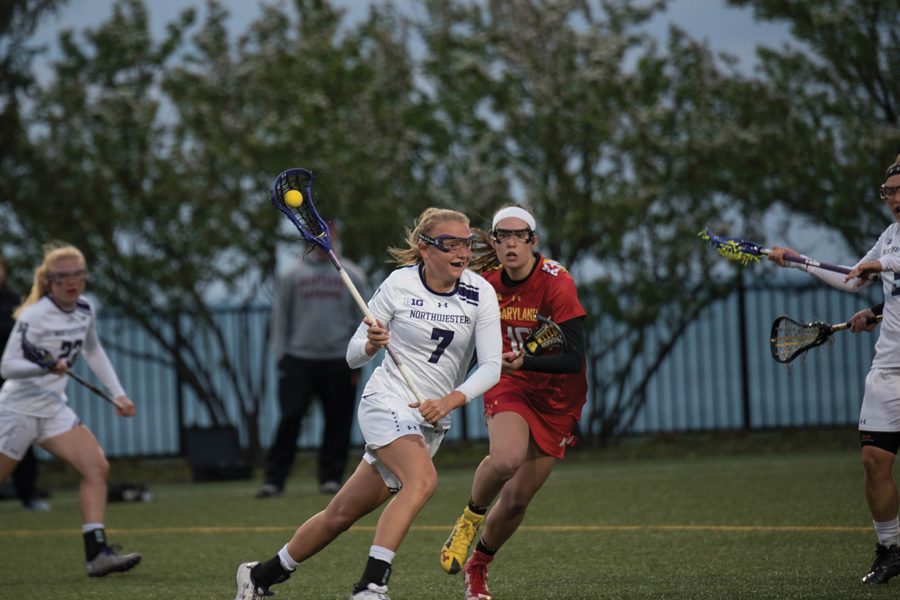 Sheila Nesselbush runs away from a defender during a 2017 home game against Maryland. The now-senior attacker and the Wildcats will travel to face the Terrapins on Thursday.

When No. 7 Northwestern (13-3, 5-0 Big Ten) lines up to face No. 3 Maryland (15-1, 5-0) in the final game of its regular season Thursday in College Park, Maryland, with a Big Ten regular season title on the line, the Wildcats will look to break some droughts and make some history.

It’s been nearly six years since NU last beat Maryland. On May 25, 2012, the Cats won 9-7 against the Terrapins in Stony Brook, New York, in the NCAA semifinals, en route to their seventh national title. That same season, Maryland lost to Syracuse at home in March; the Terrapins haven’t lost a game in College Park since.

It’s been even longer — 12 years, to be exact — since NU last won on Maryland’s home turf in College Park. That game, a 13-8 Cats win on Feb. 13, 2006, was the first time coach Kelly Amonte Hiller ever coached against her alma mater. President George W. Bush was in office, the first-generation iPhone had yet to be released and the current freshmen on this year’s NU team were in first grade.

In the years since that day in College Park, the Cats have secured just three wins over the Terrapins in 11 meetings, in which time Maryland has advanced to nine straight Final Fours and has won the Big Ten regular season title every year since the conference added lacrosse in 2015.

Despite the talk of the droughts and the records and the history, NU’s approach heading into the game isn’t any different from any of its past games, senior attacker Sheila Nesselbush said.

“Even though we’re playing Maryland, we’re treating it just like any other game,” Nesselbush said. “I don’t think the way we play is really going to change, so the selfless play that we’ve had over the course of the whole season is just going to continue.”

The two programs also met on the final day of the regular season last April, when the Terrapins dominated for an 18-9 victory in Evanston. They rallied weeks later to another victory over NU, this time on their home turf by a score of 14-6 to win the 2017 Big Ten Tournament.

Maryland suffered its only loss this season to No. 5 North Carolina in overtime on Feb. 24, a game in which the Tar Heels held the Terrapins to a season-low 29 shots.

Attacker Megan Whittle is one of the primary threats of the Maryland offense. The senior, who ranks in the nationwide top 10 in goals, free position goals and shots per game, has registered 61 goals this season and broke the program’s all-time scoring record earlier this month — topping a list that includes Amonte Hiller.

The Terrapins average the third-most draw controls per game in the country at 16.50, compared to NU’s 15.69 per game. Senior attacker Shelby Fredericks said the Cats will need to focus on their box-outs and creating space in the draw circle to capitalize on those opportunities against Maryland.

“We’ve been very successful thus far and we just have to … take that same mentality against (Maryland),” said Fredericks, who averages the second-most draw controls per game in the country. “We respect them, and they respect us. I think it’s going to be a great challenge for us.”

NU leads Maryland, and the conference, in two noteworthy defensive categories: caused turnovers (9.8) and ground balls per game (22.7). Senior defenders Lindsay Darrell and Ally Mueller will command the defense against the Terrapins’ attack, and the Cats will look for another strong performance from redshirt freshman goalkeeper Julie Krupnick.

Even in the postgame Senior Day celebrations of last weekend’s 19-7 win against Rutgers, the specter of the matchup against Maryland was present, looming in the distance as it has in every game this season.

After Saturday’s triumph, junior attacker Selena Lasota emphasized that NU was right back to work, saying in three simple words that the goal to end the season on a strong note hadn’t changed: