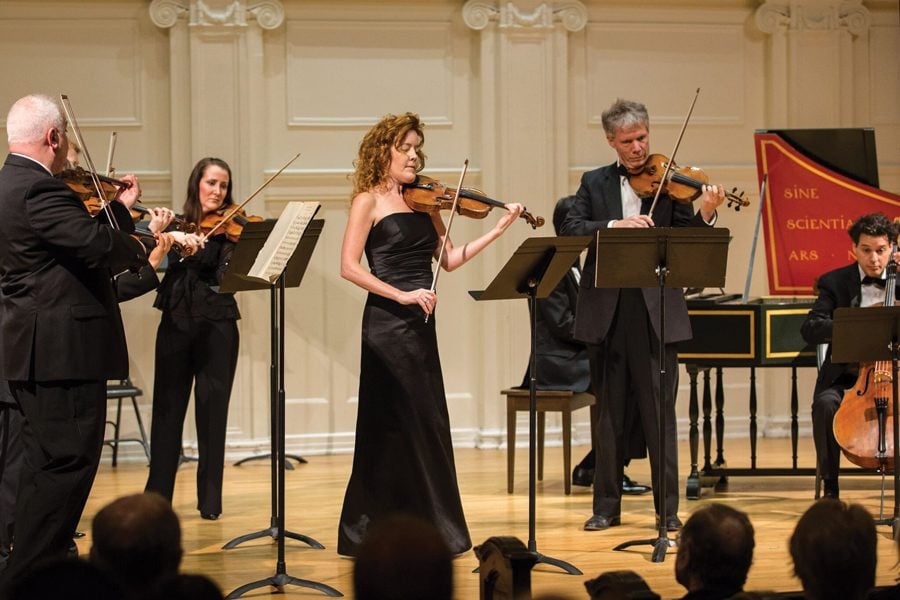 When acclaimed cellist Katinka Kleijn came to Richard Webster (Bienen ’74, ’77) with the idea of performing a newly commissioned composition at the 45th annual Bach Week Festival, Webster said he knew the creative decision would be met with some skepticism.

The Bach Week Festival, which Webster co-founded in 1974 with a former Northwestern professor, traditionally honors the work of Johann Sebastian Bach. Though the festival has never premiered a new work, Webster said he signed off on the pitch with confidence. He said he is “always one for pushing the edge,” and his trust in Kleijn’s musical prowess was enough to assure him that the benefits of the performance would outweigh any possible backlash.

Kleijn sought out composer Marcos Balter (Bienen ’08) to make the idea a reality. She will perform Balter’s composition “Ensuite” at Bach Week’s Candlelight Concert on Friday at Nichols Concert Hall in Evanston.

Balter said he was initially intimidated to take on the project, as Bach is one of his “composition heroes.” Composing a response to Bach’s cello suites was a humbling experience, he said.

“For the longest time, I thought I wouldn’t say yes to a project like this,” Balter said. “But it just seemed right for a variety of reasons: for … Katinka, an old collaborator; for being a project for Chicago, a place where I lived for 12 years; and for being a piece that is commissioned in honor of Andreas Waldburg-Wolfegg, who is a huge new music advocate and commissioner.”

Kleijn commissioned the piece to celebrate Waldburg-Wolfegg, former president of the International Contemporary Ensemble. She described Waldburg-Wolfegg as “a dear friend” who greatly influenced her as a musician and as a person, at times acting as a catalyst for her artistic development.

Development and creativity live at the core of Bach Week Festival, Webster said. He said the festival organizers take pride in branching out every year to keep the music of Bach fresh and exciting.

Other Bach Week Festival performances will take unconventional approaches to Bach’s classical works. The finale concert, which will take place at North Park University’s Anderson Chapel on May 4, features an alternative arrangement of Bach’s cantata “Gloria in excelsis Deo.” The original cantata calls for a sermon after the first movement, but Webster said he wanted to incorporate a musical substitute.

In lieu of the spoken sermon, Bienen lecturer Desirée Ruhstrat will play Bach’s Violin Partita No. 2 in D minor. Ruhstrat said the partita is an “epic” and extremely challenging piece.

Webster said Ruhstrat will bring a “compelling” performance of the partita to the Bach Week stage. He will conduct the cantata, as well as the other opening and closing night pieces.

Webster lives in Boston now, where he is the music director at Trinity Church Boston. However, he said he has been traveling to Evanston and Chicago for the past 12 years to organize Bach Week Festival.

When asked what keeps him coming back every year, Webster gave a simple answer: Bach.

“The thing about J.S. Bach is that he has inspired all of the western music that has come after him,” Webster said. “He died in 1750, but his influence is as alive today as it was 250 years ago … the man was a musical industrialist, but an inexhaustible fountain of creativity.”