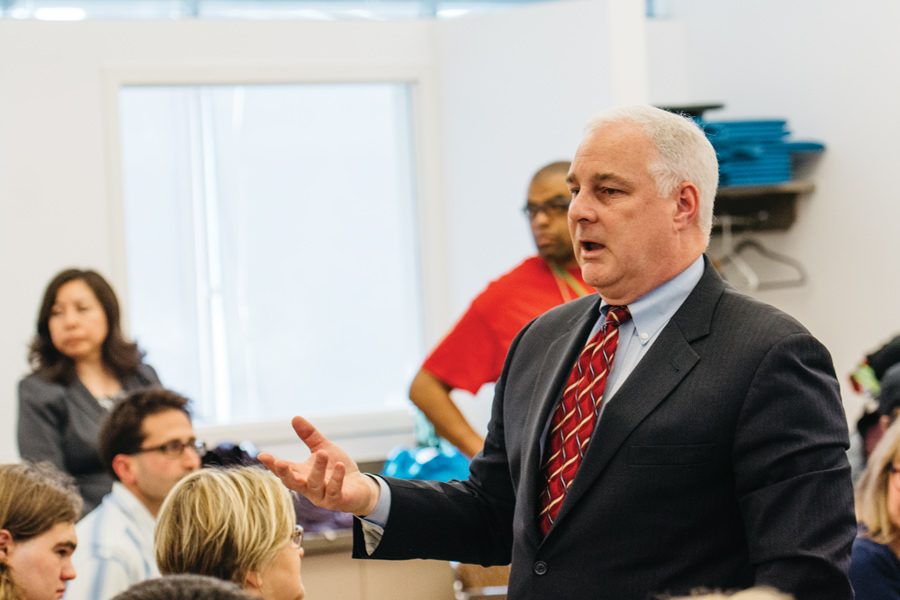 Chris Canning, a member of the Pace Suburban Bus board of directors, addresses attendees of Tuesday’s public hearing. The hearing discussed the proposal to discontinue the 205 CTA bus route and provide alternative service through the 213 and 208 Pace bus routes.

Evanston residents and other commuters voiced concerns at Tuesday’s public hearing about the proposal to cut a 205 Chicago Transit Authority bus route, saying students would lack sufficient transportation to and from Evanston Township High School.

“This is a terrible idea,” ETHS superintendent Eric Witherspoon said about the proposal. “If we, as a community and a society, don’t take care of our children, what have we become? Do you think all the children are cookie-cutter, and they all have to be at the school at the same time?”

CTA and Pace Suburban Bus held the public hearing to discuss the proposal to discontinue the 205 Chicago/Golf Road CTA bus route and instead provide an alternate service via Pace routes 208 Golf Road and 213 Green Bay Road. CTA and Pace representatives described the proposal and then opened the floor for public testimony, which was mediated by Greg Longhini, board secretary of the CTA.

Longhini said the proposed restructuring would make the 205 CTA bus route unnecessary. That route currently serves a large number of students commuting to and from ETHS, as District 202 does not provide student bussing, so Pace representatives proposed a single morning trip to school and a single trip back on the 213 Pace route.

Evanston resident Cecelia Wallin, the mother of three ETHS graduates and an incoming ETHS freshman, said her children already faced challenges getting to school with the operating 205 CTA bus route, and removing the route would only increase these challenges.

Kate Masur, another Evanston resident, said the plan for bus route changes would be “extremely detrimental” to the North Shore community, particularly to ETHS students.

“The proposed reduction in service will make it more difficult and more time-consuming for our students to get to school,” Masur said.

Others voiced concerns that the proposal would make traveling more difficult for elderly riders and riders with disabilities, due to the increased numbers of transfers and walking distances to bus stops.

These proposed changes are only in “Phase 1” of execution, and Chris Canning, a member of the Pace board of directors, said Pace “tentatively” plans to discuss Tuesday’s hearing at a May board meeting.

Longhini said he anticipates CTA will make a decision on whether to continue with the changes in early summer. He added that those unable to attend the hearing can email him their testimonies to be submitted to public record.

Wallin told The Daily that although she is appreciative of the chance to voice her concerns, she is “not terribly optimistic.”

“People who will be affected most can’t make meetings like this and can’t advocate as well for themselves,” she said. “It is an issue of equity, and the people who need public transit the most will be hurt the most.”