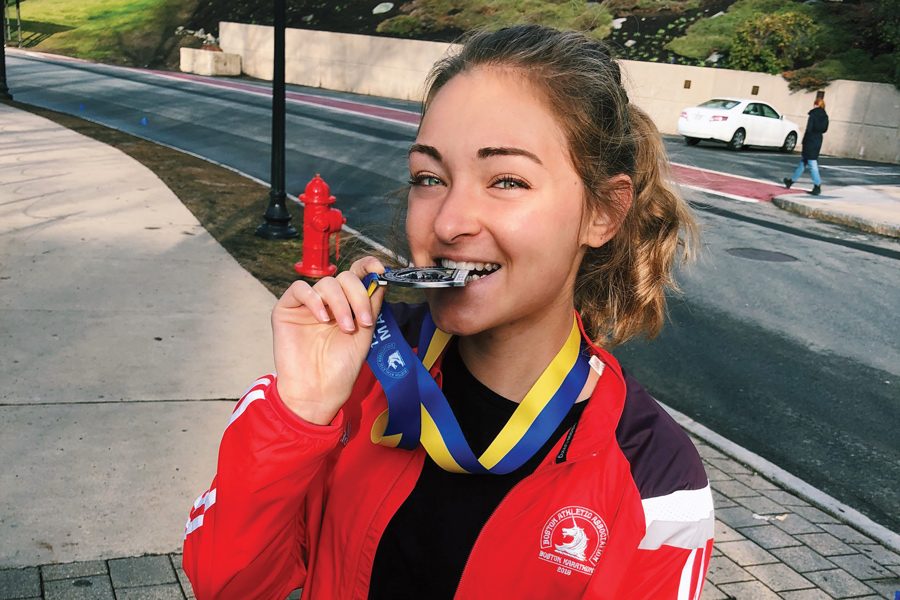 Usually, Medill sophomores Emma Kumer, Anna Laffrey and David Gleisner chase stories. But on April 16, they ran after something different — the finish line of the 122nd Annual Boston Marathon.

Kumer said the Boston Marathon was her second marathon, and she’d been training for it since January. Kumer and Laffrey ran their qualifying race for Boston together at the Wisconsin Marathon last May, and Gleisner ran the Chicagoland Spring Marathon the morning following Dillo Day.

Laffrey described the Boston Marathon as the “crown jewel for distance runners” and something she had always wanted to do as a runner. Though Laffrey said she didn’t feel “super confident” going into the race because a previous injury had impacted her training, the energy of others around her while lining up for her wave made her forget those concerns.

“The start is really cool because there’s 30,000 people all together lined up for this race,” Laffrey said. “There’s so much hype, it’s ridiculous. When my wave started, I started crying because it felt all-important.”

The spectators were also a highlight of the race, Laffrey said. After running her first marathon in rural Wisconsin, she said being able to see dozens of spectators gathered helped her feel supported throughout the race.

“It felt like there was support the entire way,” Laffrey said. “At any point in the course, you could see at least 50 spectators right next to you or in the distance.”

However, Laffrey was later told that less than half the normal number of spectators turned out on the cold and rainy race day.

Kumer said she was expecting large groups of people watching her run, but when she ran by some of the small towns, there were only about 20 or so people cheering the runners on. She added that the weather probably contributed to it, with temperatures in the high 30s to mid 40s, heavy gusts of winds and constant rain.

“I was getting dressed and I was terrified,” Kumer said. “It was the grossest weather. … I had all these layers I had intended to whip off in the middle of the race, because I thought it was going to be warm enough to not have to wear them all, but I wore them the whole time because it was so cold.”

The Boston Marathon’s course is unique because it’s almost a straight line and the first half of the race is mostly downhill. Runners are warned about “Heartbreak Hill,” one of the largest hills on the course between miles 20 and 21.

Gleisner said he mentally prepared himself for the incline but was not aware of the slopes that would continue after the iconic hill.

“What they don’t tell you is that after Heartbreak Hill, there are also other hills,” Gleisner said. “At about mile 24, my legs totally gave out, so the last two miles were a total slog up these small inclines that felt like mountains.”

Laffrey and Kumer both finished the marathon in under 4 hours, with times of 3:35 and 3:29, respectively. Gleisner finished just under 3 hours with a time of 2:57.

Kumer said her final moments on the course were bittersweet.

“It was that last straight and I started thinking I almost didn’t want it to end,” Kumer said. “I was in a lot of pain, but I thought, ‘This is the Boston Marathon, this is my first time running it, and the minute I finish, I’ve lost this race.’”