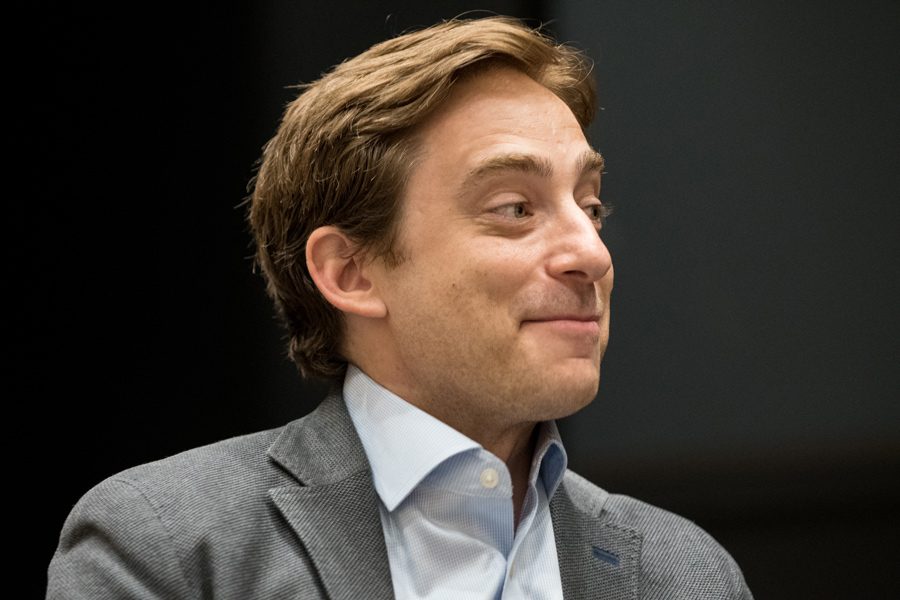 Evan Osnos speaks at an event hosted by the Medill School of Journalism, Media, Integrated Marketing Communications and the Center for the Writing Arts. The journalist discussed his experiences covering President Donald Trump and authoritarian states with Medill lecturer Alex Kotlowitz.

In a talk at the McCormick Foundation Center Forum, Osnos — who currently covers politics and foreign affairs for the magazine — highlighted his reporting on the alt-right movement that gained traction during President Donald Trump’s campaign, as well as his foreign coverage of authoritarian states such as China.

The event was moderated by Medill lecturer Alex Kotlowitz and was co-sponsored by the Medill School of Journalism, Media, Integrated Marketing Communications and the Center for the Writing Arts. English Prof. Reginald Gibbons, director of The Center for the Writing Arts, told The Daily that the event is part of an ongoing series that brings in journalists for conversations with Kotlowitz.

Osnos told the audience that his experience reporting in China prepared him to cover Trump. Specifically, he said Trump’s rise rapidly altered the standards of what was considered acceptable among his followers, a process that was very similar to the effect that living under authoritarian leaders has on citizens.

“It’s amazing what a leader can do to people,” Osnos said. “They can make them say things and do things that they find in themselves, these ideas that they might once have found nonpermissible, and that they now find OK.”

When introducing Osnos, Kotlowitz addressed the rise of Trump and said the increasingly hostile attitude toward journalists has made him appreciate those who continue to report the facts.

He also said he respects Osnos for his dedication to seeking the truth, and that his work is “imbued” with a sense of deep honesty.

“I’ve been reporting and writing for 40 years, and I’ve never been so proud to be a part of this profession,” Kotlowitz said. “It really has nothing to do with what I’ve done, but it’s because of my colleagues, and their courage and defiance in the face of what has become a daily attack on the press.”

Gibbons told The Daily he also admired Osnos as a journalist and as a writer, praising him for his thorough coverage of foreign and political issues.

“He’s a very thoughtful, very perceptive writer, and he finds out interesting things, just as reporters should,” Gibbons said. “It’s very enlightening to read him. I always learn something important.”