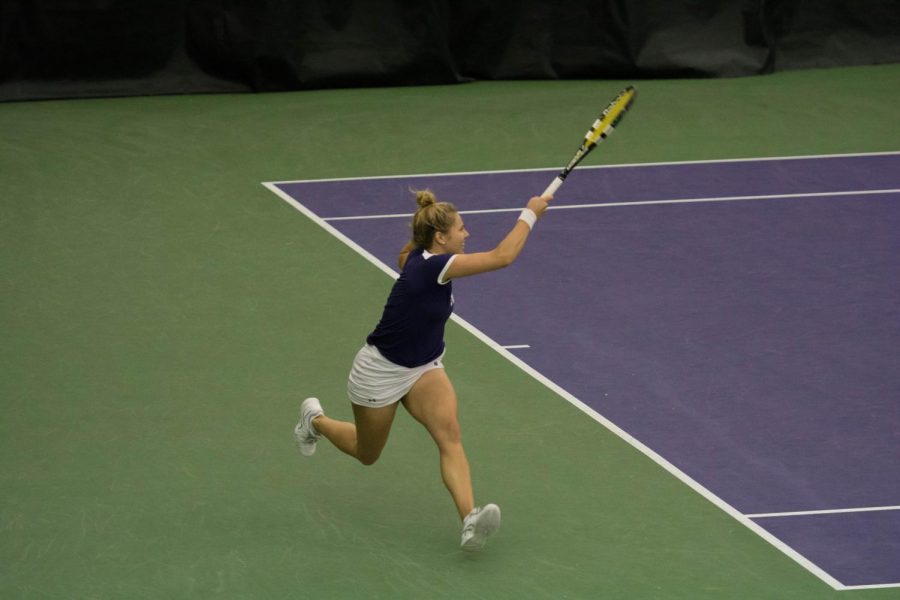 Alex Chatt strikes a forehand. The junior and Northwestern capped a perfect conference season with this weekend’s wins.

Northwestern capped off its perfect run in conference play with road wins over Penn State and Ohio State this weekend to secure the Big Ten regular season title.

“It was a tough victory today,” coach Claire Pollard said after Sunday’s win. “We got behind on a lot of courts, and we really had to turn some points around. It was a well contested match. It’s a really satisfying weekend, really satisfying to go undefeated.”

The Cats made quick work of Penn State, winning the doubles point and the first three singles matches. Senior Alex Chatt clinched both the match win and a share of the conference regular season title with her win at No. 5 singles.

“I didn’t even know I clinched until after I got off the court,” Chatt said. “We knew that Penn State wasn’t going to be the most difficult or demanding match. We were looking more ahead to Ohio State because we weren’t really too concerned with sharing the title; we really wanted the full ownership.”

NU dropped just one match and two total sets against the Nittany Lions, with everyone winning in straight sets except for the match loss at No. 6 singles.

The Cats came into Sunday’s match in control of their own destiny, needing to win against Ohio State to guarantee an outright Big Ten regular season title. They did just that.

The senior doubles pair of Maddie Lipp and Erin Larner, ranked No. 4 in the country, took care of business to secure the doubles point for NU. With the team score sitting at 3-2, junior Lee Or secured the title for the Cats after coming back from a set down to win the decisive third set 6-4.

“It’s always nice to clinch,” Or said. “I could’ve done it a bit earlier, but I’ll take what I can get. It’s a nice feeling to win the match regardless of whether we clinched (the) Big Ten (title).”

The win against the Buckeyes marked NU’s eighth straight match win and its 16th victory in its last 17 contests. The Cats have now earned the Big Ten regular season titles and/or Big Ten tournament champions 17 times in Pollard’s 20 seasons.

The regular season title is Pollard’s 13th at NU, tying her for the most in Big Ten history.

“It means I’ve had great players,” Pollard said when asked about her success as a coach. “I’ve had great players that have taken advantage of opportunities and played their best when it counts. I’ve always been grateful that Northwestern has allowed me to be the coach of the program.”

With the regular season now in the books, the Cats will turn their attention to the Big Ten Tournament, where they have clinched the No. 1 seed.

“We’ll enjoy this tonight,” Pollard said. “We’re not going to talk about the tournament yet. We talked about playing a complete season, and every weekend provides you with a different opportunity.”