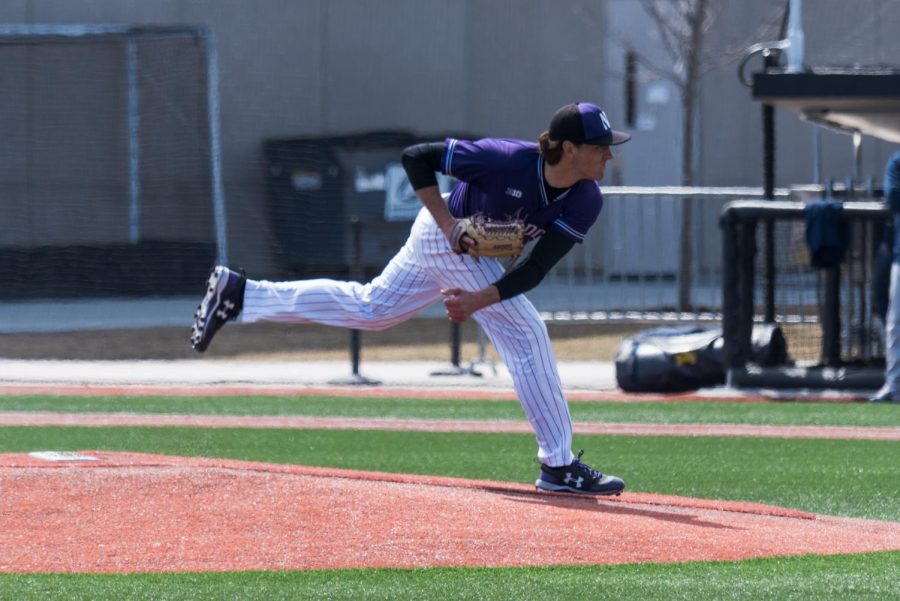 Jack Pagliarni throws another pitch. The freshman and Northwestern’s other starters have been relied on heavily this season.

Senior reliever Richard Fordon started warming up early in the game and waited for starter Quinn Lavelle’s outing to reach its tipping point. Even after Lavelle gave up 5 runs in the first inning of Friday’s 5-3 loss to Michigan State, Fordon thought he wasn’t going to be needed until the freshman reached 100 pitches.

For one inning, he stretched. In another, he sat. Now and then the left-hander mixed in a fastball, but he eventually entered the game in the sixth and pitched three scoreless innings.

Again on Sunday, coach Spencer Allen didn’t flinch as he watched four runners cross the plate in the first against freshman starter Jack Pagliarini in another loss to the Spartans.

Recently, Allen has been relying on just three starters to eat significant innings. For the non-conference one-offs that take place between series, including Northwestern’s (9-24, 1-14 Big Ten) Tuesday game against lllinois-Chicago (20-13), the tipping point will come earlier for the starter and the calculus for Allen’s pitching changes will be substantially different.

“We have to figure out a way to start a little bit better,” Allen said. “I was hoping we could have learned from Quinn on Friday night, again we popped up a 4 spot, there, but (the offense) fought and continued to compete at the plate, make plays in the field. (That’s) all you can ask for.”

Lavelle rebounded with four scoreless innings on Friday and Pagliarini retired the final 15 batters he faced on Sunday, but the two freshmen starters and sophomore Hank Christie aren’t capable of throwing 100-plus pitches multiple times a week. Allen said he must rely solely on his bullpen in these non-conference games, and Tuesday’s starter is likely to be pulled if a similar situation to what Lavelle and Pagliarini faced this weekend occurs.

Despite the starters turning their outings around, the team was swept this weekend by the Spartans and only held one lead in three games. Christie and Pagliarini’s turnarounds, though, were seen as takeaways from the series.

“There’s definitely positives even though the outcome wasn’t what we wanted,” sophomore outfielder Charlie Maxwell said. “We strung a bunch of zeros together in the middle of the game.”

After Sunday’s loss, Allen was only certain that it wouldn’t be Lavelle, Pagliarini or Christie getting a nod. All of NU’s other pitchers are on the table.

“It’s kind of a bullpen game,” Allen said. “(We) might look at a Ryan Bader or Matt Gannon … but a lot of guys will throw.”

In last week’s 6-4 loss against Milwaukee, the count of pitchers Allen used reached eight. Gannon, a sophomore, gave up 4 runs in the first inning, and then he was gone. Unlike Lavelle, he didn’t have a pitch count Allen wanted him to reach, so junior reliever Tyler Lass came in for the second and threw two scoreless innings. Then he was done for the day, as six more pitchers paraded through the final six innings.

That makes these midweek games prime territory for relievers like Fordon to demonstrate their ability and increase their role in the pitching staff.

“As a competitor, you never want to come out of the game,” Fordon said, “and I always feel that way.”