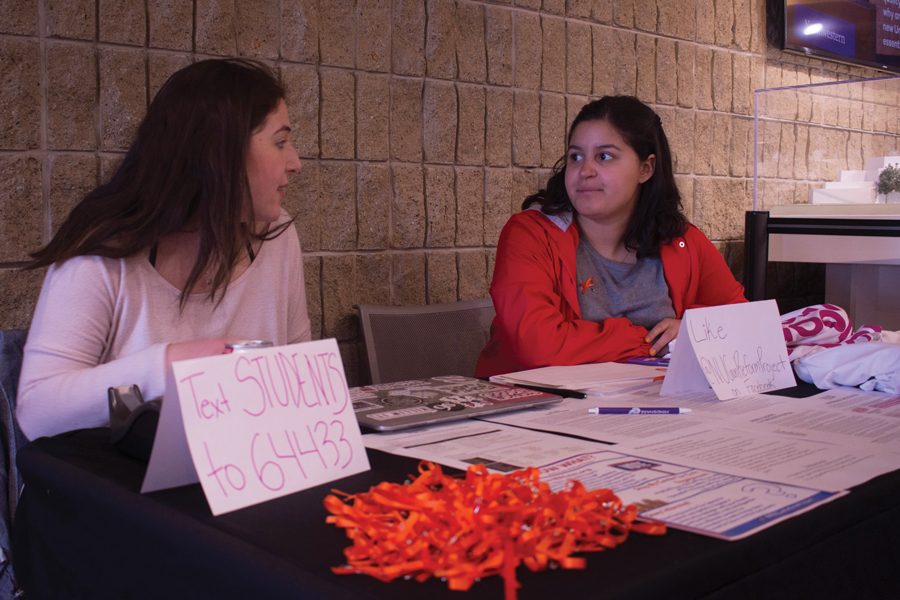 Medill senior Stephanie Bernstein (left) and Communication freshman Valen-Marie Santos sit at a table in Norris University Center. The students are part of the Northwestern Gun Reform Project, which held events Friday to honor the victims of the Columbine shooting.

Friday marked the 19-year anniversary of the shooting, in which two gunmen killed 13 people and wounded more than 20 others.

Organizers set up a table in Norris University Center and provided ribbons, fact sheets about gun violence and opportunities to write letters to senators. SESP senior Rachel Wallack attended the event and said she wrote a letter to U.S. Sen. Marco Rubio (R-Fla.) urging him to push gun control measures.

“I’m hoping to be a voice, right, and to use my voice in any way that I can so that I’m not being complicit in enabling this sort of senseless violence to continue to happen,” Wallack said, “by being knowledgeable about the policies and understanding what needs to be changed, and what small changes can take effect that are super plausible for officials to enact.”

The NGRP was originally named Northwestern Stands with Marjory Stoneman Douglas and was established after the Parkland shooting on Feb. 14. Organizers first planned a walkout on March 14 and had planned a vigil later that day, but the vigil was canceled due to the swatting incident that briefly put the Evanston campus on lockdown.

Medill senior Stephanie Bernstein, one of the NGRP’s organizers, said the group decided to rename itself so that members could continue planning events in the future.

“We agreed as a group to rebrand to something that can have longevity, that can continue to strive to be an organization that promotes public activism and social change in the context of gun violence,” Bernstein said. “And this isn’t just with school shootings. This is also with gun violence in neighborhoods in Chicago and neighborhoods like right around the corner.”

In addition to the table in Norris, the group screened the 2002 documentary “Bowling for Columbine,” which was directed by Michael Moore and won an Academy Award. Although the NGRP isn’t currently recognized as a student organization and thus can’t get University funding, Bernstein said the group is in the process of gaining that recognition.

Communication freshman Valen-Marie Santos, who is also an NGRP organizer, said the group felt it had to plan an event to remember the victims from Columbine.

“It felt weird not to do anything on a day where the whole country was kind of coming together to do this thing and commemorate this day and the tragedy that happened 19 years ago,” she said. “It’s kind of the same feeling we had when we planned the walkout: We don’t want our community to just sit idly by while the whole country is facing this problem.”

Bernstein said she wasn’t sure what the group’s next event will be, but she’s happy to have helped create an organization that is continuing to grow.

“This problem isn’t going away, so we shouldn’t go away,” she said. “Unfortunately, I’m graduating, but the students in this group that are younger than me are by far the most passionate, driven and well-spoken students I’ve met at Northwestern, and I have no doubt in my mind that they’re gonna do awesome things with this organization.”